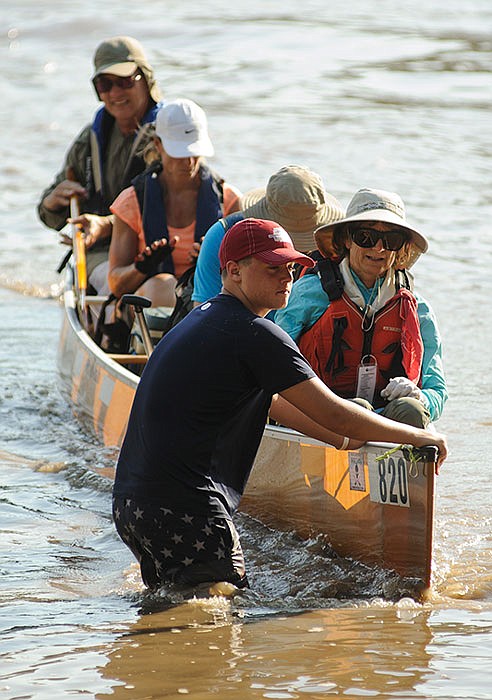 Hunter Thornsberry helps guide a four-person canoe to the riverbank as paddler at the conclusion of a previous MR 340.

Don't be surprised to see a steady stream of boaters mid-week on the Missouri River in Jefferson City.

It's time once again for the annual Missouri American Water MR340. The endurance race goes 340 miles across the state.

Competitors will start Tuesday morning in Kansas City and finish in St. Charles. They have until Friday to complete the race.

Participants are allowed exactly 88 hours to complete the course. There are nine checkpoints along the route, where paddlers are required to sign in and sign out. Cut-off times will be associated with these checkpoints based on the 88-hour pace. Failure to meet checkpoint deadlines is grounds for disqualification. To finish this race in 88 hours is a huge accomplishment, as only two-thirds of the teams were able to do that last year.

Among those racing this year will be Jefferson City residents Joey Gerbes and Steve Taylor. Both men got into CrossFit and decided like to give the race a try.

"We've been training since the winter," Gerbes said. "We'll be using a three-man canoe. We've never done anything like this before. I've done endurance racing on a motorcycle, but nothing water-based. I don't think there will be as much muscle fatigue, but to keep pushing is the hardest part I can see."

Although the current is about 2-3 mph and there are no rapids, MR340 organizers said there are still plenty of hazards for participants. The biggest being motorboats, mostly fisherman, and the occasional towboat pushing barges. They also have to deal with wing dikes, buoys and bridge pilings.

Thanks to the U.S. Coast Guard, the river is marked over the entire course with mileage and channel markers. It is almost impossible not to know, within a mile or less, your exact location. At the pre-race meeting and safety check tonight, racers will be briefed on how to read these markers, how to handle a tow and barge passage and what constitutes public property on the river. Paddlers will also be provided with a series of dispatches leading up to the race with details on training, strategy and safety.

Gerbes said he and Taylor hope to complete the race Thursday night.

"We've done several practice runs," he said. "The plan now is to not stop and sleep until our second night. We should do 6 mph to 7 mph with the current, but if we get a little more rain up north that could help speed up the current."

Joe Wilson, known to many for his work at the Noren River Access, is joining with Jefferson City officials to recognize the first paddlers to reach what many call Wilson's Serenity Point. Those first to land on the sandbar checkpoint will be acknowledged with a signed letter from Mayor Carrie Tergin and a medallion from the city. There will also be recognition for the first boat from the 7 a.m. race start and the 8 a.m. start.

Gerbes said he and Taylor plan to be in Jefferson City by Wednesday afternoon or evening.