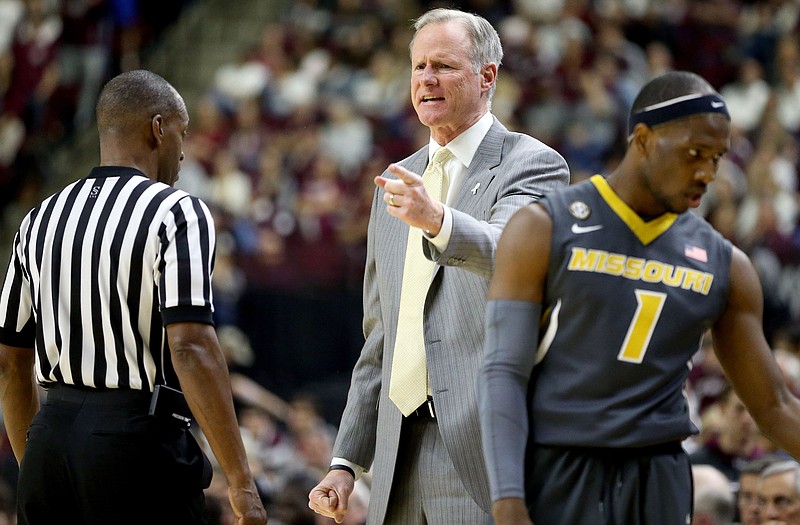 Missouri head coach Kim Anderson argues a call during the first half of Saturday's game against Texas A&M in College Station, Texas.

COLUMBIA - The Missouri men's basketball is currently stuck on a four-game losing streak, but if Saturday's game at Texas A&M was any indication, the first step to getting in the zone might be playing in one.

A zone defense, that is.

The Tigers avoided the man-to-man for "probably 39 minutes of the game," coach Kim Anderson estimated, and though Missouri fell 66-53, the 8-11 Tigers hung in with the No. 10 Aggies for longer than many expected.

"Looking back, we just felt like that was the best way to maybe keep them off-balance a little bit, maybe stagnate them a little, and I think it worked for the most part," Anderson said. "They didn't shoot the ball as well, especially early."

The Tigers held Texas A&M to 10 points in the paint and 32.3 percent shooting before halftime, during which the Tigers held four different leads.

"We kept the ball out of the middle for a long time, and we forced them into perimeter shots," Anderson said. "Whether or not it was our defense or they just didn't make them, I don't know, but I thought (we had success) trying to force them into taking uncomfortable shots, shots that they're not used to."

Anderson said it wasn't a premeditated decision to stick with the zone for so long, but the course of the game kept him from calling it off.

The zone plays into plenty of Missouri's strengths - or negates its weaknesses, at least. The Tigers have struggled with on-the-ball defending and staying out of foul trouble. Missouri has below-average size in the post and has looked slow-footed at times switching off screens. All those concerns are mitigated by the zone.

"We have to guard the ball better - that's just a fact - in whatever defense we are in," forward Ryan Rosburg said. "But I mean (zone) does make it easier, because that has been a weakness for us."

Typically, the downside to a zone is giving up offensive rebounds. When defenders don't have a designated man to block out, the time it takes to put a body on a body can be costly. And yet, the Aggies pulled in just three first-half offensive rebounds, compared to 20 defensive rebounds by Missouri.

"I think we're really aggressive on the boards," he said. "All five people on the court boarded. I don't think anybody really looked to just the big men. I think everybody took it upon themselves to get a rebound, and that definitely helped."

Things got a little stickier in the second half. Texas A&M hauled in seven offensive boards after intermission - though Missouri still held the overall edge 45-40, much to Anderson's surprise. And while Missouri avoided costly foul trouble earlier, Rosburg and point guard Terrence Phillips each were tagged with five before the game was done.

Still, only Arizona State held the Aggies, who are undefeated in Southeastern Conference play, to a lower field-goal percentage. That might explain freshman K.J. Walton's initial impression of Texas A&M.

"I think zone helps us out against a lot of teams, against teams that can't really shoot," he said. "And I think the zone just kind of gives us a chance to not use so much energy."

Though Anderson has still coached the Tigers to exert plenty of energy on the defensive end of the floor.

"Most people think zone is just laid back and letting them shoot," Rosburg said, "but it needs to be very active."

"I would say playing a zone is actually harder than playing a man, but when it's done correctly, it definitely helps," he said. "Because we were really active in that zone, and it limited the amount of paint shots they got."

The Tigers might have to reacquaint themselves with man-to-man defense Wednesday when they play at Kentucky. The Wildcats' strong perimeter shooting could render the zone ineffective. But going forward, Missouri now knows it has something to build on.

"I think that was probably the best zone I think we've ever played all season," Phillips. "I'm talking about practice, too. We communicated well. We kept the ball out of the middle a lot. It did help us control the penetration.

"... That's just one thing we want to focus on now as we go throughout the rest of the season."