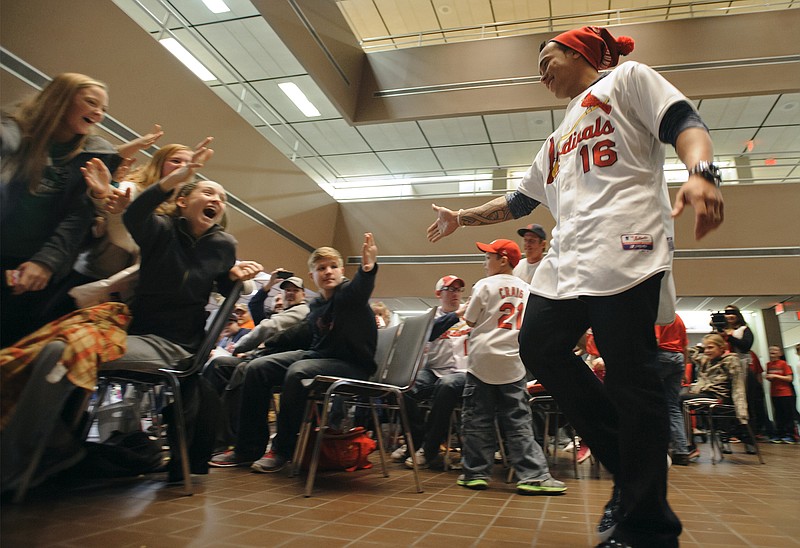 Second baseman Kolton Wong makes his entrance to the cheers of more than 500 in attendance during Friday night's stop for the 2016 Cardinals Caravan.

Growing up in Hawaii, Kolten Wong didn't have much of an idea how far the St. Louis Cardinals' fanbase reached.

"When you come to these small little towns and you're in a little gymnasium and it's full of Cardinal fans - you don't get a grasp of how big Cardinal Nation is until you actually come out see the fans," he said.

When the Cardinals second baseman joined the mid-Missouri portion of the Cardinals Caravan as it stopped in Jefferson City on Friday, he got his first glimpse of another Missouri staple: the state capitol.

"I didn't even know that existed there," he said. "It was crazy, just going in and hearing the history of that place and meeting the governor and seeing how great of a guy he is."

Alongside current Cardinals pitcher Tyler Lyons, minor-leaguers Dean Anna and Jacob Wilson, and former Cardinal pitcher Kyle McClellan, Wong met with Gov. Jay Nixon on Friday before the Caravan headed to the Missouri Farm Bureau Center to hang out with the Capital-City contingent of Cardinal Nation.

"We understand from a Cardinals standpoint that our fanbase is not just there in St. Louis," said McClellan, who now works with KMOX Radio. "It's spread so wide, and so to get to come and see those people and thank them for their continuous support - on TV, on air, on the radio, coming to games and all that - it's good to come out and mingle with them and let them know we appreciate it."

McClellan had met Nixon before when a group of Cardinals lent a hand in Joplin after the city was devastated by a tornado in 2011.

"He did an amazing job down there and getting that community back and up and going," McClellan said of the governor, "so it's just good to see him and anytime you can go to a building like that is always enjoyable."

McClellan said he participated in the Caravan four or five times during his time with the Cardinals, from 2008-12.

Wilson, an infielder, was making his debut on the Caravan - which also stopped Friday in Moberly.

"We see it when we go to all these cities all over the country and all of a sudden you see a lot of red in the stands - and in minor-league ball," Wilson said. "You see a lot of red in California and stuff like that. I mean, it's not just the Midwest. It's countrywide. And so then you get to sit here and do this and give back to the fans what they're giving you all season."

Wong has ridden with the Caravan once before, last year on the Tennessee leg. He's coming off a season in which he hit .262 with 11 home runs as the Cardinals' full-time second-baseman. He played in 150 games, a career high, and became the first Cardinal second baseman to hit 10 or more homers in consecutive seasons since 1928.

This year, he's looking for consistency.

Lyons threw a career-high 60 innings last year, making eight starts and averaging nine strikeouts per nine innings. With some injuries and additions to the Cardinals' pitching staff, he's not sure whether he'll be in the mix to start for St. Louis this season.

"I mean, there's no shortage of pitching in our organization," he said. "There hasn't been for a while now, so I don't really worry too much about that. I just kind of go in with the same mindset of just get ready to pitch, no matter what role, whether that's as a starter or a reliever. We see how quickly things change with injuries and everything else, so it's not something I really concern myself with too much.

"I just try to get ready for the season."

That's something he's eager to do, and it more or less starts with the Caravan.

"This is kind of the kickoff of 2016," he said. "It's about that time now. Everyone's getting back in the swing of baseball things and spring training's right around the corner, and obviously that goes by pretty quick, and then it's go time again."

Last season ended on a sour note, as the Cardinals fell in four games to the rival Cubs in the National League Division Series.

"I think anytime you don't win it all, there's going to be some kind of bitterness left," Lyon said. "So the season coming here now, it's a new season."

The traditionally friendly rivalry has taken on new life with Chicago's reemergence as a contender and the Cubs signing Jason Heyward, who manned right field for St. Louis in 2015.

It's a rivalry Anna's all too familiar with, as a Chicago native who grew up rooting for the Cubs. Now, he's on the other side.

"It's kind of crazy how things happen," the infielder said.

While Chicagoans - on the north side, at least - have been galvanized by the Cubs' bright future, St. Louis sports fans took a hit this week when the NFL approved the Rams' relocation to Los Angeles.

Though the city is now down to just two major professional sports teams, the Cardinals and Blues, members of the Caravan don't expect to see a bump in the city's passion for baseball this season.

As a Florissant native, McClellan is plenty familiar with the city's passion for baseball - with or without the Rams.

"But it's unfortunate. It's unfortunate the Rams didn't stay here. St. Louis can support three teams, and the fans have shown that if you put a good product on. Look what the Cardinals and Blues have done. They have ownership that's committed to the community, committed to these fans and they support them. And what we've seen with the Rams the last few years has been disappointing as far as an ownership standpoint. (Kroenke) had places that he wanted to go, and it's probably best that he went there, so that we can continue to support the organizations that support us."

Assistant general manager Michael Girsch and scouting director Randy Flores agreed they couldn't picture the city backing the Cardinals any more than it already has.

The front-office members drove in separate from the Caravan after they wrapped up one-year deals Friday with Brandon Moss, Trevor Rosenthal, Seth Maness and Matt Adams to avoid arbitration.

Flores was hired in August to take the position vacated by Chris Correa, who in July was fired and pleaded guilty earlier this month to charges stemming from an FBI investigation into the Cardinals' hacking of the Houston Astros.

Despite the unique set of circumstances, Flores said he hasn't necessarily noticed.

"For me, my affiliation (with) the organization all started Sept. 1, and so I don't have any of the feelings of, "Wow, this has been a strange offseason,'" he said. "Every day since Sept. 1 has brought unique experiences, and I think our department is embracing the challenge ahead."

Plus, as a former Cardinal himself, he's just happy to be back.

"It's pinch-me moments, definitely," he said. "And with the calendar year now switching to January and the heavy season for our department gearing up, it's time for goosebumps. We're really excited."