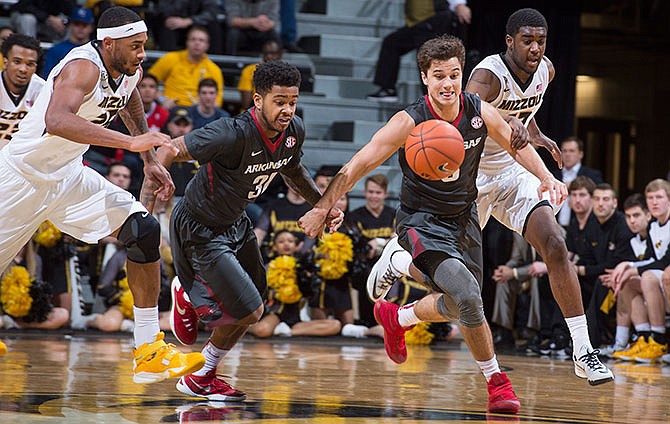 Missouri's Russell Woods, Arkansas' Anton Beard, second from left, and Dusty Hannahs and Missouri's Namon Wright race to a loose ball during the second half of an NCAA college basketball game, Tuesday, Jan. 12, 2016, in Columbia, Mo. Arkansas won the game 94-61.

COLUMBIA - No one would have been surprised if Mike Anderson's name was the one on everyone's tongues after Missouri and Arkansas played Tuesday at Mizzou Arena. Or Jimmy Whitt.

Not many were betting on Wilt Chamberlain.

Anderson and Whitt, the former Missouri coach and Hickman graduate, respectively, made their marks. But when the Tigers lost to Arkansas 94-61, it was the largest margin in a Missouri home loss since Feb. 16, 1957 - one against a Kansas team led by none other than Wilt the Stilt.

The Tigers lost by 33 in that game, too. The only time they've lost by more at home was in 1945 against Iowa Pre-Flight.

"We got run over by a truck," Missouri coach Kim Anderson said.

The Tigers were within seven points with 16:40 to play, but Arkansas outscored Missouri 43-15 from then on.

Mike Anderson, who coached at Missouri from 2006-11, picked up what he said might have been his best-ever road win. Whitt, a freshman, scored a career-high 15 points.

"I thought he really did a great job," Kim Anderson said of Whitt. "Played within himself. He's got a good midrange jumper. I've watched him all week. I don't think he tries to do something that he can't do."

Arkansas had five players with double-digit scoring totals, led by Moses Kingsley's 25 and Dusty Hannahs' 20. The Razorbacks shot 63 percent to Missouri's 39, had 20 steals to the Tigers' 8 and had 14 more points off turnovers.

Arkansas hit 8-of-15 3-pointers (53 percent), continuing its hot streak beyond the arc. In their previous two Southeastern Conference wins, the Razorbacks had hit 58 percent of their 3s.

Missouri found its best offense at the free-throw line, where the Tigers hit 20-of-23 attempts.

In the first half, Missouri had 11 fewer field goals than Arkansas, which shot 64.5 percent in the half. The Razorbacks hit 14 of their first 17 shots, including three 3-pointers. Arkansas held Missouri scoreless for the game's first 3:14. The Razorbacks jumped out to a 16-4 lead before Jakeenan Gant hit a jumper at 13:24 for Missouri's first field goal.

Whitt answered with a jumper of his own, his first points in Columbia as a college player. But the Tigers hung around with 14 free throws on 17 attempts in the first half, including seven from Tramaine Isabell. Late in the half, the Tigers cut the lead to 11 for the first time in five minutes on a 5-0 burst, but they couldn't get any closer and entered halftime down 46-34.

After Anthlon Bell ended Arkansas' first possession out of halftime with a 3, Missouri went on a 10-2 run during which Ryan Rosburg worked a post maneuver to cut the lead to less than 10 for the first time since less than five minutes into the game. Terrence Phillips added two free throws, his fifth and sixth points of the run, to get within seven. The Razorbacks answered with seven straight points, however. It would be the beginning of a 20-2 run that buried the Tigers.

Despite the big loss, Anderson didn't feel his players gave up.

Mike Anderson, meanwhile, said he wasn't concerned with the margin.

Last year in Columbia, the Razorbacks beat Missouri by one on two missed Tiger free throws.

Missouri was coming off a win Saturday against Auburn in its home SEC debut. Missouri (8-8, 1-2 SEC) plays Saturday at undefeated No. 19 South Carolina.