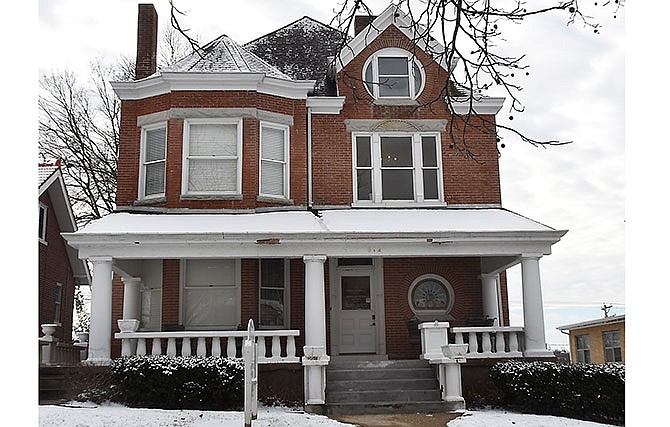 The Towles-Buckner House at 612 Capitol Ave. in Jefferson City "retains a high degree of integrity and is a strong contribution to the historic character of the district," according to the National Register of Historic Places nomination for the Capital Avenue Historic District.

A cozy, red brick Queen Anne-style home on Capitol Avenue in Jefferson City bears the names of its first owner and another who restored it nearly a century later.

The Towles-Buckner House, 612 Capitol Ave., "retains a high degree of integrity and is a strong contribution to the historic character of the district," according to the National Register of Historic Places nomination for the Capitol Avenue Historic District. 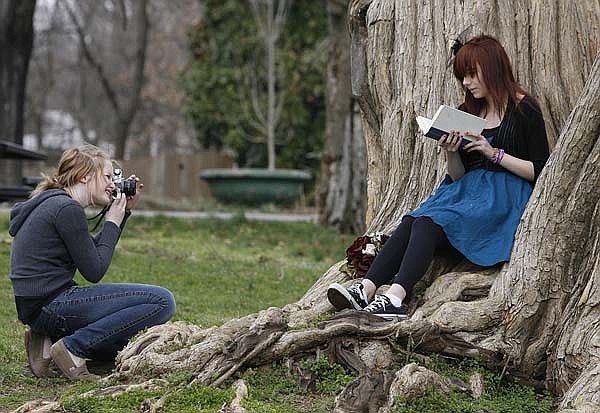 Claudia Hall, 14, focuses her camera while taking a portrait of Haley Zega,15, both of Fayetteville, Sunday afternoon at Wilson Park in Fayetteville. Hall said she was using her grandfather&#x27;s film camera and shooting the portrait for the fun of it.

Thomas Towles, a Confederate Civil War veteran and lawyer, built this home about 1895 on what was then called West Main Street.

Former city Historic Preservation Commission chairman Chip Buckner and his wife, Deb, rehabilitated the home, which had been divided into a multi-family dwelling, into an office space.

The Buckners bought the property in 1989 from Tom and Myrtle Turpin, who may have lived there 40 years in the first floor with two apartments above, Chip Buckner said. The property changed hands several times between the death of Mrs. Towles in 1927 and the Turpins, Deb Buckner said.

The full attic had one small finished room used as an office by Mr. Turpin, who told the Buckners he believed it had been used to house Lincoln University students who worked as gardeners for the Towles family, Deb Buckner said.

One of the major restoration pieces was returning an ornate staircase, which had been cut off and redirected for the apartments, to the entryway with a 22-foot-high ceiling.

The Buckners were also pleased to find the building had not collapsed under some poor remodeling decisions in the upstairs bathroom, Chip Buckner said.

A 1933 addition accommodated kitchens and sitting rooms for the apartment use.

Florence and Thomas Towles' only surviving son was one of the first electricians in the Capital City, Chip Buckner said.

"We always suspected that the knob-and-tube wiring throughout the house was his handiwork," he said.

The Buckners fondly remember taking advantage of the home's location to host an annual Christmas parade party. Guests were invited over early for hot cider and cookies before heading outside to watch the parade go by, Deb Buckner said.

The home was dubbed the Towles-Buckner by a consultant during a survey of historic properties in the area in the 1990s, Chip Buckner said.

During their research of the home's history, the Buckners were struck by several references to "the home owned by Florence Ewing Towles and her husband, rather than by Thomas O. Towles and his wife, in an era in which the men inevitably controlled the property," he said.

Florence's father was Supreme Court Judge Ephraim Ewing, a prominent Jefferson citian. And by her sister's marriage, she was in-law to Sen. F.M. Cockerell.

She was born in Richmond, Missouri, and moved to Jefferson City as a child after her father was appointed to the Supreme Court.

"Mrs. Towles was prominently identified with various civic and charitable organizations and was known for efforts to advance any project that might result in the betterment of Jefferson City."

She was a founder and regent for many years of the local Jane Randolph Chapter of the Daughters of the American Revolution and also served as state regent.

Florence also was a founder of the Finis Ewing Chapter of the Daughters of 1812, named in honor of her ancestor and over which she presided for 12 years.

Judge Ewing's daughter married Thomas Towles in 1885. They had two sons: Ephraim, who became assistant chief engineer of the Missouri Public Service Commission, and William, who died of scarlet fever at age 13 in 1902.

Before marrying Florence in October, Towles organized a two-month expedition from St. Louis through Yellowstone and ending in Sitka, Alaska, according to the July 8, 1885, St. Louis Post Dispatch.

The Towles family - and the Buckner family for that matter - were active members of Grace Episcopal Church. Their son Ephraim left money in his will for a memorial to his parent at the church, which became part of a church beautification project in 1936, according to the News and Tribune.

"His comfortable home, with his cultured wife, is 612 East Main street, which is brightened by the presence of his two interesting sons, William Beverly and Eph Ewing," said the 1900 Cole County Illustraed Sketch Book.

At his death, Thomas Towles was deputy marshal of the Missouri Supreme Court and "one of the most widely known men in Missouri public life," according to the News and Tribune.

Towles was born in Columbia, Virginia, and educated at Hampton-Sidney College, then studied law under Hon. Stephen Southall, a longtime law professor at the University of Virginia.

A Confederate veteran, Towles's service has been recorded differently by various sources.

The 1936 News and Tribune said he enlisted in the 3rd Virginia Cavalry and attained the rank of major.

The Historic City of Jefferson records say he "joined the Confederate Army in April 1861, being present when Fort Sumter was captured and eyewitness to the Merrimac and Monitor battle."

Service records at www.fold3.com agree he was with the 3rd Virginia Cavalry, but as an enlisted man. Those records say he enlisted in May 1861 and by December 1861 was serving as a quartermaster sergeant.

Then, in March 1862, he re-enlisted with Youngs Mill Army of the Peninsula. But by May 1862 he had been admitted to the general hospital in Farmville, Virginia, for chronic colitis and bronchitis described by the surgeon as "very delicate."

Until he was paroled by the Union army in April 1865, Towles remained at the hospital serving as a nurse and hospital attendant.

By 1867, Towles had moved west first to St. Louis and then settling at LaGrange, where he practiced law and was the first editor of the LaGrange Democrat, and he also served as an editorial writer for the St. Louis Republican.

Towles moved to Jefferson City in 1874.

He was a member of the Democrat State Convention at St. Louis in 1868 and served as assistant chief clerk of the House of Representatives of Missouri 1873-75, according to the Cole County Historical Society.

He began working in the U.S. House of Representatives in 1875 as an assistant chief clerk and served 20 years following as chief clerk. While in Washington, he pushed to get a bridge built across the Missouri River at Jefferson City, according to Historic City of Jefferson records.

He was given the rank of brigadier general while serving on the military staff of Gov. William Stone 1893-97. Traveling with the governor in 1894, the Oct. 5, 1894, Springfield Democrat said: "Both these gentlemen will make speeches and there will no doubt be a large crowd present to hear them as they are good speakers and never fail to say something of interest."

Towles relocated the Democrat headquarters to Chicago from Washington DC in 1896, where at the convention he was secretary of the executive committee of the National Democratic Committee.

In 1897 he was appointed by Gov. Lon Stephens as deputy state insurance superintendent.

He also was a Knights Templar and a 32-degree Mason.

Towles "had, perhaps, the widest political acquaintance of any man in Missouri," the Sunday News and Tribune said.