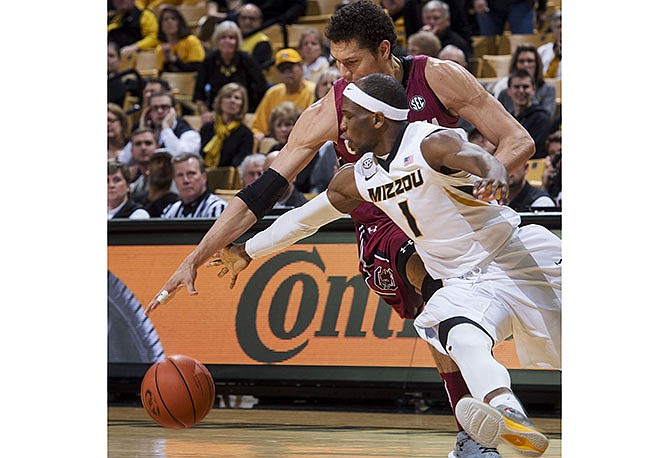 Missouri's Terrence Phillips (1) tries to steal the ball away from South Carolina's Michael Carrera during the second half of an NCAA college basketball game, Tuesday, Feb. 16, 2016, in Columbia, Mo. Missouri won the game 72-67.

COLUMBIA, Mo. - When Missouri picked up its first win in 10 tries Saturday against Tennessee, it wasn't hard to credit the big crowd, the especially emotional day or the middle-of-the-pack opponent.

There could be no such caveats Tuesday.

Despite the lingering news of junior guard Wes Clark's dismissal, a halved Mizzou Arena crowd and a 20-win foe in the building, the Tigers won consecutive Southeastern Conference games for the first time under Kim Anderson. Missouri led by as many as 15, trailed just twice and won 72-67 against South Carolina, a team that was ranked as recently as Feb. 7.

"It just felt like we expected to win," Ryan Rosburg said. "And we knew we were going to win. When we went down, I think there was no panic in our eyes like maybe in past times. We just knew we had to make a big play."

Rosburg, whose 18 points were a team high, scored 17 or more for the fourth straight game. He was one of five Tigers in double figures, with Terrence Phillips (15), Namon Wright (11), Tramaine Isabell (10) and K.J. Walton (10) being the others.

Missouri jumped out to a 23-8 lead, helped along by the Gamecocks missing three of their first 22 shots from the field. South Carolina was held scoreless for the game's first 2:55 and without a field goal for the first 4:29.

"They just flat-out outplayed us," South Carolina coach Frank Martin said. "Out-toughed us, out-scrapped us, beat us on the glass, beat us to the rim, beat us running the court. They just beat us."

Tramaine Isabell scored six of those points and 10 before halftime. With Clark gone and Terrence Phillips in early foul trouble, Missouri was light on guards, leading to 5 minutes of court time from walk-on Jimmy Barton.

"Tramaine was ready," Wright said. "He stepped up when we needed him to, as well as Terrence. They led us. They made sure to take care of the ball when we needed them to, and that's ... a big reason why we won."

Missouri's lead hung around double digits, settling at 10 with 13 seconds left before halftime on an Isabell layup. But a foul with 0.3 seconds to play allowed Chris Silva to hit two free throws before the half, and consecutive P.J. Dozier baskets out of intermission put South Carolina within four.

The Tigers went on a 9-3 run to get the lead back up to 10, with the last four points coming on consecutive Rosburg layups in transition.

"I wish my senior center would play with the same urgency that he plays with as their careers are coming to an end," Martin said of Rosburg. "Is he as old as I am?"

Rosburg had never scored as many as 17 at Missouri before beginning his recent hot streak and had just one double-digit scoring output last season.

"This team, in difficult times, has needed a little bit of leadership," Martin said. "... No surprise that they're playing well right now at this time of year and he's playing as well as he is."

Rosburg spent nearly as much time at the free-throw line as all of South Carolina, shooting 17. At times, it almost looked like a "Hack-a-Shaq" strategy, like when he was fouled late before an inbounds pass was even thrown.

"First of all, I didn't even know you could do that," he said. "It was the like NBA. I feel like DeAndre Jordan."

Rosburg hit just eight of those 17 free throws, but that was enough to fend off the Gamecocks, who took their first lead with 2:57 to play. Rosburg converted two free throws to give the lead back to Missouri, before Duane Notice hit a jumper to give South Carolina a 65-64 lead.

Rosburg then tried out a new trick, dishing an assist to Terrence Phillips for an and-1 basket.

"I told Terrence he gives me so many dimes, I had to throw him one," Rosburg said.

Dozier tied it at 67 with a jumper, but Rosburg hit a free throw and Phillips found Walton for a layup to go up three. Rosburg made one of two free throws with :24 to play to make it a two-possession game.

The win makes two straight following Missouri's 75-64 win Saturday against the Volunteers. That game's attendance of 10,536 was boosted by the fact admission was free with a donation of any amount to pediatric cancer research. Funds were being raised in honor the 5-year-old daughter of assistant coach Brad Loos, Rhyan, who was diagnosed with neuroblastoma in October.

It was announced before Tuesday's game Clark had been dismissed from the team for failing to meet academic expectations.

"From a personal standpoint, I'd like to wish Wes the best," Anderson said. "We're going to move on."

"Wes, some of his best games of his career have been against us," Martin said. "It's unfortunate."