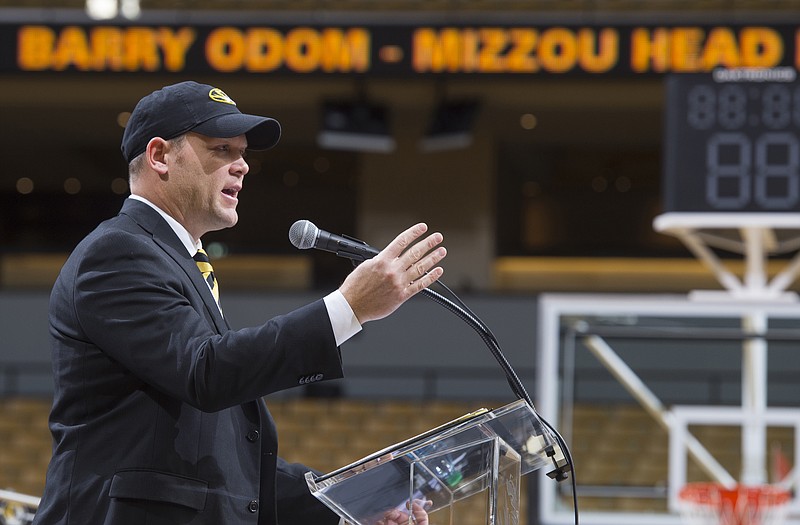 COLUMBIA, Mo. - Barry Odom's first significant mark on the Missouri football team was put to ink Wednesday as the Tigers added a class of 20 players on National Signing Day.

The class is highlighted by a few four-star signees, some much-needed transfers and a handful of late flips.

It's hardly surprising the Tigers' class doesn't quite match up numbers-wise. Odom and his staff were left scrambling to pick up the pieces after a 5-7 season that ended with the resignation of Gary Pinkel, the program's winningest coach.

Still, Odom and his staff were happy with their haul.

"I (was happy) to do what we did with the limited amount of time we had," said safeties coach Ryan Walters, who coached under Pinkel in 2015. "We really worked hard on the evaluation and trying to reach and touch prospective student-athletes and gain relationships ... so I was proud of what we were able to accomplish, and I'm excited for the future in terms of recruiting here at Missouri."

Williams, a 6-foot-5 235 pounder, made a late visit to Arizona State but decided to stay in his own backyard.

"That was definitely one of the biggest signees that we had," defensive coordinator DeMontie Cross said. "Local guy. Defensive line. Tradition. He has a chance to be the flagship guy once some of these veteran guys go out the door. If he has a chance to come in and play, that'll be great, but if not, he has all the abilities to continue the rich tradition we have here at D-Line Zou."

"The concern for us was defensive tackles," Cross said of Missouri flipping Utsey. "We're two-deep there right now, but the concern is these guys are getting high-round (NFL Draft) grades and you never know if somebody's going to leave. We wanted to make sure we had a couple guys in place."

As for Crockett and Strong, they provide a shift in style from Missouri's traditional small, speedy tailbacks.

"We want our backs to be just a little bit bigger," said running backs coach Cornell Ford, who previously coached cornerbacks for Missouri. "Still the same kind of explosiveness that we've had in the past, but size matters in this conference, just because of the pounding that they take and the size of the defenses that they're going to face."

"Love his physicalness as a ballplayer," Ford said. "You look throughout his high-school career, the kid averaged 7 yards every time he touched the ball. Just a downhill, physical, powerful runner and has the kind of explosiveness that can pop one every once in a while as well. He's a kid that can come in and make an impact."

Strong, who originally committed to Missouri last year, brings more of the same.

"He's very much like Crockett, maybe a touch faster and has the ability to touch it one time and go the distance," Ford said.

Also transferring in are wide receivers Chris Black and Dominic Collins, who bring much-needed experience to Missouri's young receiving corps. Black, an Alabama graduate transfer, is already enrolled and will have one year at Missouri.

"He looked at this as an opportunity to come in and help Mizzou right away," Odom said. "He had lots of options and when he came and visited on campus, he felt like this was the right fit for him. So we're excited about him."

Receivers coach Andy Hill added: "He can bring experience, the edge of the competition that he saw every day at Alabama and certainly in playing situations, getting ready to go. He has high expectations for himself. He has one year to prove it, so the guy in particular I think is a special individual and the times I've been around him, I'm real impressed with how serious he is about being great."

As for Collins, Hill found him through former Missouri teammate Steve Crapo of Saddleback Community College.

"He called me in the first part of December and said, "Hey, we've got a dude out here, a wide receiver, that has not been recruited very hard but he's a playmaker and a good kid and a lot of positives about him,'" said Hill, who previously coached quarterbacks at Missouri. "... We said, "Hey, we have an immediate need here at wide receiver,' through the recruiting process when Barry got the job, so we spent probably 30 or 40 junior-college wideouts on the board and he was probably the top two every time we looked at somebody."

Missouri's offensive line could see an immediate impact from a transfer as well: Tyler Howell, who committed to Missouri last year but was unable to get academically eligible. Howell, a 6-foot-8, 305-pound Butler Community College transfer, is already enrolled at Missouri.

Tre'vour Simms was another big get on Missouri's offensive line, in a literal sense as well as a recruiting one. The 6-foot-5, 300-pound East St. Louis (Ill.) High School prospect had originally committed to Illinois but announced his decision Wednesday to come to Columbia.

"He was a guy that we targeted after I got that job that we really liked," Odom said. "I had him in camp, I like his size. Just right now, I like his size. He could be in the locker room and doesn't look different from a junior, so to speak, so I'm excited about him, that he can fit in pretty quickly."

Missouri added a quarterback as well, something the staff didn't necessarily plan on doing earlier in the recruiting process. The dismissal of rising senior Maty Mauk and transfer of Eddie Printz changed that.

"Last season on the recruiting board, we didn't know if we were going to take one or not, just quite honestly," Odom said. "Always, whether you've got a spot for it or not, if you find a great (quarterback) out there, then you're going to recruit him and find a way to go take it.

"... It wasn't a necessity that we were going to take, but after the last month or so ... that number changed, then obviously the importance of signing a guy jumped up to maybe the most important thing that we did."

Odom told offensive coordinator Josh Heupel to go out and find the best quarterback he could. In doing so, he flipped Micah Wilson.

"Quick, strong arm, athletic," Heupel said of Wilson. "Has the ability to extend plays with his feet and situationally gives you some versatility with the quarterback run game."

Another significant flip came in the signing of Lafayette High School tight end Brendan Scales, who had previously committed to Alabama.

"Anytime you can keep somebody like that with that skillset close to home it's huge," tight-end coach Joe Jon Finley said. "He's been a Missouri fan his whole life, and obviously we thought very highly of him."

Missouri picked up Albert Okwuegbunam at tight end as well, a 6-foot-5, 225-pounder from Springfield, Ill.

Defensively, the Tigers added a pair of linebackers in Cale Garrett and Trey Baldwin.

"Kearney has been really, really good to the University of Missouri with the student-athletes that we've gotten out of there, and Cale's not going to be any different," Odom said.

Baldwin is already enrolled, and Odom believes having him in spring camp will do wonders.

"We've got decent depth at that spot right now," he said, "but he does bring some things to the table. A little bit different dimension on some things he's been able to do in the box that he'll have a chance (to contribute this year)."

Walters is one of three holdovers from Pinkel's crew of assistants, and he's happy with the Tigers' secondary recruits. Cornerbacks Jerod Alton and Christian Holmes and safeties DeMarkus Acy and Gret Taylor give the Tigers some rough talent to work with as Missouri returns nine of 11 defensive starters.

"You can't teach size and you can't teach speed, you know what I mean?" Walters said. "I think we've got some guys that have some length and that can run, and so I'm excited for our strength coach, coach (Rohrk) Cutchlow, to get ahold of those guys in the summertime. They're all smart kids, too, we've got coming in. Definitely looking for them to add depth and contribute this fall."

For the second straight year, Missouri offered a specialist a scholarship. Last year it was Corey Fatony, who went on to set the single-season school punting record. This year, it's kicker Tucker McCann, who has a good shot at replacing graduated kicker Andrew Baggett.

"Tucker is probably as good of a kickoff and field goal kicker as there is in the country," Odom said.