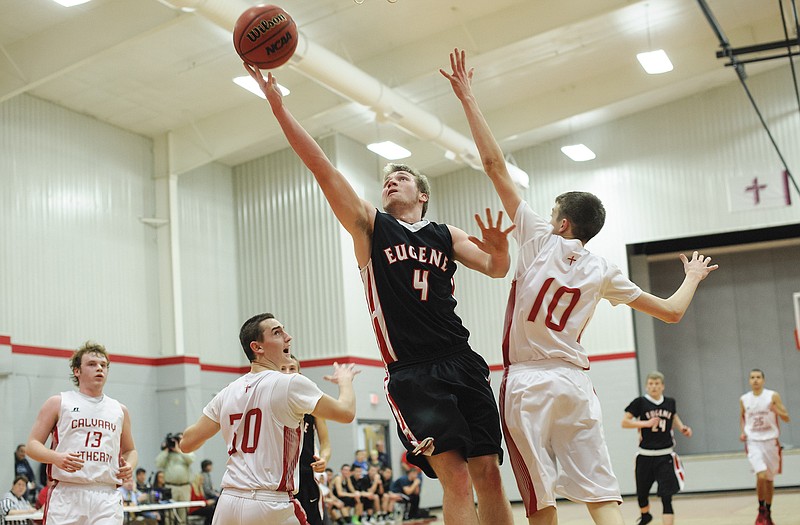 Eugene's Blake Rains drives the lane for a basket against the defense of Calvary Lutheran's Colin Bernskoetter (10) and Cal Kolzow (30) in the second quarter of Monday night's game at Calvary.

When the Eugene Eagles traveled to Calvary Lutheran on Monday, they were hoping to rebound from a two-loss performance at last week's Eldon Tournament.

It never hurts to have a 31-point first quarter.

The Eagles defeated Calvary 90-58, forcing a running clock for much of the fourth quarter and shooting 49 percent from the field.

"We couldn't get them to miss anything," Calvary coach Mark Buffington said.

Eugene nearly matched Calvary's final point total in the first half alone, scoring 56. The Lions scored the first four points of the game, but the Eagles responded with a 12-0 run, during which they hit five of six shots.

The Eagles took command with an up-tempo style of play, pressing on defense and starting fast on offense.

"That's what we want to do," Engelbrecht said. "Sometimes people slow the game down and kind of muddy it up, but I thought tonight we did a really good job of just rebounding the basketball, making a good outlet and we do want to play fast and try to get the ball up and down."

The Eagles turned the ball over just once in the first half. Calvary finished with 18 total turnovers, though the Lions never had more than five in a quarter, and Buffington was happy with the way his team handled the pressure.

"That's been a bugaboo of ours at times, in particular against a team like that," Buffington said, "so I was pleased with that. We really took care of the ball well and you just can't compete with the way they shoot the ball."

The Eagles made 12-of-22 shots in the first quarter, good for 54.5 percent. It was a pleasant turnaround for Engelbrecht.

"We played pretty good defense, but we just could not get our offense rolling" Engelbrecht said of the Eldon Tournament, during which the Eagles lost to Lebanon and School of the Osage. "Tonight, everybody seemed to contribute. It just seemed like even the guys off the bench were knocking down shots, and that's what we've been waiting for all year long."

Eugene had five players post double-digit scoring totals: Blake Rains (19), Chase Dickerson (17), Zachary Bond (17), Corey Love (11) and Carson Doerhoff (11). Besides Bond, each of those players are seniors, all of whom are starters.

"I think that's what we hoped, that our leadership would step up tonight, and I think they did," Engelbrecht said. "They came in relaxed and they set the tempo early and they kept the pedal to the metal."

The Lions, meanwhile, have a junior-heavy roster - including three starters. Buffington said Calvary can use Eugene as an example of where the Lions can be next year.

"We're excited," he said. "We don't want to look past this year, but we're also excited about next year and being able to compete, because we've got a good group of juniors. They've done well, and hopefully we can build off that."