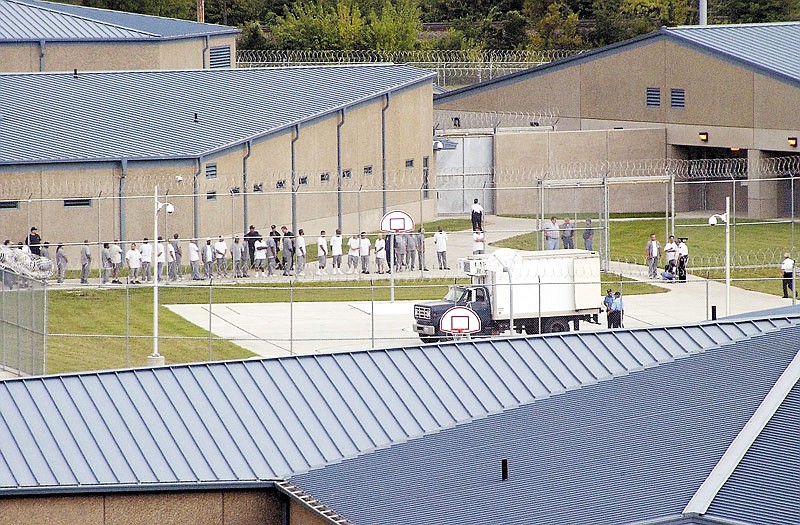 In this Sept. 15, 2004 file photo, prisoners await placement in the Jefferson City Correctional Center, operated by the Missouri Department of Corrections. They had been transferred from the Missouri State Penitentary, which closed that year.

State Auditor Nicole Galloway said Friday her office will audit the Missouri's Legal Expense Fund, which is the pool of money used to make payments in lawsuits against the state.

In a news release, she noted recent reports have highlighted an increase in the amount of money the state is spending each year to settle lawsuits against it, its departments and agencies for inappropriate activity, including sexual harassment and discrimination occurring on the job.

Information provided to the News Tribune by the attorney general's office last week shows Missouri government paid more than $3,556,504.33 in damages in 2015 and 2016, settling a total of 25 employment discrimination cases.

That number doesn't include the $2 million settlement reported Friday with Gracia Backer, of New Bloomfield, the former state representative who sued Gov. Jay Nixon in 2014 after she was dismissed as head of the state's Employment Security division.

Nor does it include the more than $3 million awarded to Pat Rowe Kerr, of Jefferson City, by a Cole County jury this summer for damages and attorneys' fees and other "cases in which an appeal is pending or the judgment otherwise is not yet final," Assistant Attorney General Rochelle Reeves told the News Tribune in a letter.

The attorney general's office last week filed its notice of appeal in the Kerr case.

The largest single payment in 2015 and 2016 was $1,228,456.02 to Terrie Fuchs, of Holts Summit, who won a discrimination and workplace harassment case against the Department of Revenue originally filed in 2011.

But, the Department of Corrections' 13 cases - for a total of $1,320,548.31 in damages - led all state departments and agencies for the number of cases settled since Jan. 1 last year.

And the 15 new discrimination cases filed against the DOC since Jan. 1, 2015 - in state or federal courts, or in the administrative hearing process - also led all departments and agencies.

In her news release Friday, Galloway said: "Like many of my colleagues in state government, I was alarmed and dismayed by recent reporting on sexual harassment and discrimination involving Department of Corrections employees, and by the troubling amount of taxpayer money the state is spending to settle these lawsuits.

"I intend to use the full authority of my office to broadly examine the finances and policies related to these payouts and the culture that may be allowing this activity to continue unchecked across state government."

At a news conference last week, Gov. Jay Nixon declined to comment on the Corrections cases, noting he had not been involved with the details of them.

But a lengthy story in Kansas City's The Pitch weekly newspaper last month provided readers with lots of details.

McCann Beatty referred to that article, which was headlined "Department of Corrections can't escape its own worst habits," in her letter to Richardson.

"As recently reported by The Pitch newspaper of Kansas City, the department has paid nearly $7.6 million in just the last four years to settle several lawsuits brought by victims of harassment and retaliation, with dozens of additional cases pending," she wrote.

"Despite these huge payments of taxpayer dollars, department officials did not see fit to share this information with members of the General Assembly."

McCann Beatty also wrote Richardson: "Based on The Pitch's reporting, the department seems to have a culture in which sexual harassment is tolerated while its victims face harsh punishment for coming forward.

"This is unacceptable and must be changed.

"A House investigation would play an essential role in bringing about that change."

The Pitch story, published Thanksgiving week, begins: "Each day, as she prepared herself to work another shift at the Missouri Department of Corrections prison, Lashonda Reid knew to expect one thing.

The story reported the racial slurs and sex-related comments Reid heard almost daily or that were directed at other female co-workers.

"Her dread now curdled into fear because these words had come not from the inmates she guarded, but from fellow DOC staffers - including some who supervised her," the story reported. "She had endured it for two years. She had a child to support. She had no husband to help. It was an impossible job.

"But it was a job. She stayed. She took the abuse. Until her doctor told her, 'If you stay there, they are going to kill you.'"

So, the story said, Reid "quit - then sued the department and won $166,000 for humiliation, violations of her civil rights, and retribution for having filed a complaint.

"And she turns out not to have been alone.

"One of Reid's bosses, Maj. Maurice Guerin, said in sworn testimony in her case that the racial jokes and slurs weren't isolated taunts directed only at Reid and her friend. 'It's the American way,' he said."

The Kansas City newspaper said it examined more than 60 lawsuits and did a number of interviews with current and former DOC employees.

"The department is a demeaning, even dangerous place to work," The Pitch story reported. "Trial transcripts and depositions from prison workers around the state paint a startling picture of repeated and overt sexual comments, groping, and pressure from supervisors and co-workers to have sex.

"When those advances were rebuffed or reported to higher authorities, threats, retaliation and even physical assaults sometimes followed."

The newspaper story also reported the problem appears to be relatively new.

"During the first six months of 2016, the DOC was ordered to pay more than $4 million to victims harassed because of sex, religion or disability, as well as to those who faced intimidation and retribution after they filed their suits.

"A further 33 lawsuits are awaiting trial, and more are pending approval from the Missouri Commission on Human Rights to proceed to court."

The newspaper said "lawsuits, court transcripts and sources indicate that racial and gender epithets at a number of prisons occur daily," with male employees, including supervisors, commonly using slang or vulgar words to refer to female DOC employees.

"In some cases, according to records, supervisors have dangled promises of good evaluations and advancements in exchange for sexual favors," the newspaper reported. "A sergeant at a Cameron prison admitted to trying to have sex with at least a dozen co-workers.

"His usual come-on was 'Let's be lovers.'

"He told one woman under his direct supervision that he could make sure she had the correct answers to an interview test. A couple of months later, after two sexual encounters, she got the answers, passed and was advanced, according to court records."

"Basically, if an employee files a lawsuit, the state sometimes offers money - in some cases as much as a half-million dollars - to make the suit disappear," the story reported. "The standard agreement is called the 'General Release Agreement and Waiver of All Claims.'

"In that document, the state agrees it will give the victim a monetary payment in return for a statement that the claimed discrimination, harassment or retaliation never happened - in essence, a disavowal of sworn testimony.

"At the same time, the state's agreement permits the department to ignore evidence of wrongdoing and the chance to fix many of the problems, leaving some of the bad actors employed by the department.

"The result is beneficial to almost everyone involved - except the taxpayers of the state, who are footing the often-substantial bills."

Several of the settlement documents the paper received under open-records requests included the statement: "The Department and its employees specifically disclaim any wrongdoing and maintain that their actions were justified under both the law and internal policies."

The Pitch also said the "state includes a secrecy clause in many of the agreements. The clause that is in many standard department settlements prohibits the victims and their attorneys from revealing details of the agreement, including how much money was paid."

But, the paper noted, the state has to release the information, under Missouri's Open Meetings-Open Records, or Sunshine Law.

Much of The Pitch story provides details of specific cases involving DOC employees and their supervisors from around the state.

McCann Beatty told House Speaker Richardson the investigating committee she wants to see formed "should have broad authority to look into all aspects of this developing scandal and be granted subpoena authority in order to compel witness testimony and the disclosure of relevant records."

She added: "The apparent failure of leadership at the Corrections department demands immediate leadership by the House of Representatives to ensure that our corrections officers, who perform difficult and stressful jobs in a dangerous environment, receive the support they deserve."

Readers can access the complete Pitch story online at www.pitch.com/news/article/20844489/prison-broke-the-missouri-department-of-corrections-cant-escape-its-own-worst-habits. Excerpts from the article were used with permission.