100 years ago - Capstone placed on Capitol 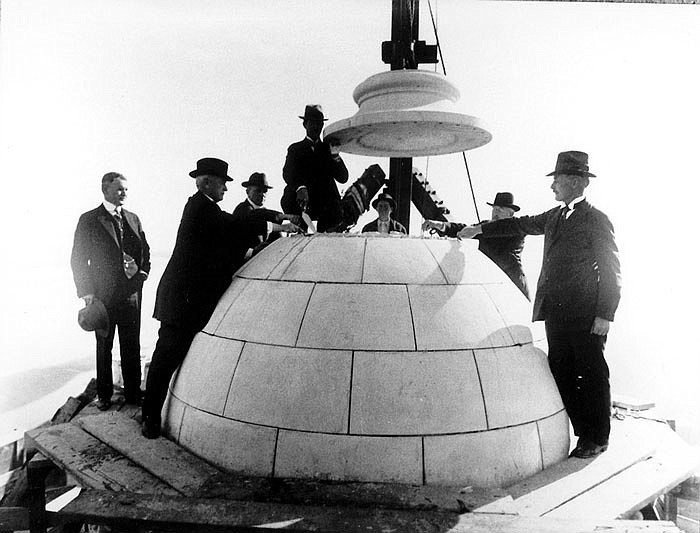 Members of the Missouri State Capitol Commission board assist in laying the Capitol capstone on Dec. 5, 1916.

Ceres may sit on top of the Capitol dome, but some little-known tokens lay beneath it.

This day 100 years ago, a small group of men and women climbed "narrow ladders and slender stairways" 250 feet high to take part in the laying of the 3-feet-in-diameter, stone capstone, according to the Dec. 6, 1916, Daily Capital News.

"It was a hazardous trip at best," the front page report said.

As the superintendent from the John Gill and Sons of Cleveland, Ohio, positioned the stone, Capitol Commissioners "each with a trowel wiped the cement about."

One of those ceremonial trowels is on display today at the Missouri State Archive. Its inscription reads: "This trowel was used by EW Stephens chairman of the Missouri State Capitol Commission Board in laying the capstone of the dome of the state capitol on December 5 1916."

Before the capstone was set, Stephens slipped a half-dollar underneath, First National Bank official Emil Schott placed "several bright new coppers," and a few other things were dropped in.

After the capstone was set, the dignitaries took photos. But the makeshift scaffolding for the event was narrow.

"Photographs taken Dec. 5 of a group of people show them appearing less elated than the occasion that drew them together might otherwise have occasioned. "Some appear downright tense ," said Capitol historian Bob Priddy, who is completing a book on the Capitol's history.

He added: "(I'm) not sure where the photographer stood, though."

The laying of the capstone was a significant stop along a 13-year timeline from the loss of the second Capitol Feb. 5, 1911, due to a lightning strike during a "freakish thunderstorm, and the dedication of the completed third Capitol Oct. 6, 1924.

"This event marked a milestone in the Capitol's construction, which began three years before on May 6, 1913," the Capitol website said. "One hundred years later, the Capitol is entering a new phase of construction as restoration to the building's exterior continues."

"The dome is one of unsurpassed beauty," the State Capitol Commission Board final report said. "No American capitol has a dome which excels or equals it."

Above the dome is the 10-feet tall, bronze figure sculpted by Iowa-born Sherry Fry, representing Ceres, "who of all the classic divinities is best qualified to be the patron goddess of this great agricultural state," the report said.

Her left arm holds a sheaf of grain, her right hand extends in "perpetual blessing," and her gaze looks downward.

Below the dome is the unique whispering gallery, "the only one in any building which has been scientifically planned," the decoration commission report said.

As the Capitol's dome can be seen from miles away, the dome's decorated interior can be seen soaring 160 feet above the statehouse's third floor.