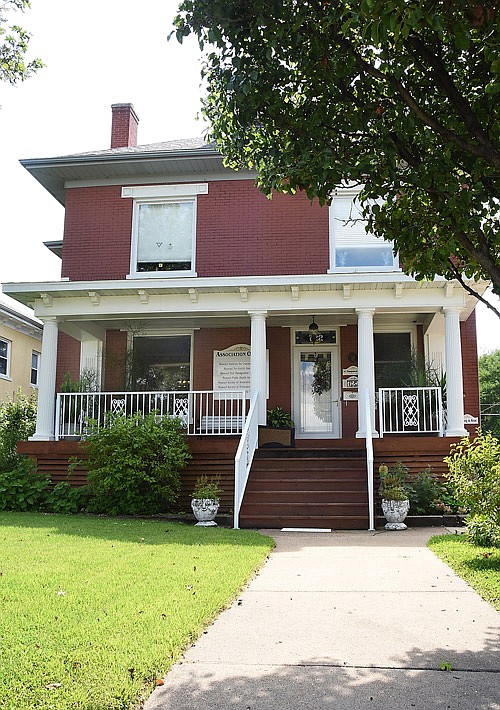 The former warden's home at 722 E. Capitol Ave. in Jefferson City now serves as an office to several state associations.

After taking the fateful phone call that a riot was erupting across from his Jefferson City home at 722 E. Capitol Ave., teenager John Eidson drove out to the pond where his father, then Warden Ralph Eidson, was fishing to give him the news.

The young Eidson was instructed to return to the family home, where several inmates were working their daily jobs as trustees. After securing the family arms room upstairs, Eidson drove the trustees to the prison's L-Hall, which was located outside the walls.

"The trustees would have preferred to stay at the house; they did not want to get caught up in it," he said.

That was only the beginning for the mature youth, whose father had served with the Missouri Highway Patrol before being appointed warden in 1949. The riot's sounds and sights were thick at the home, where his mother and brother remained.

While outside 722, Eidson was waved down by Lt. Hubert Brigham, who needed a second pair of hands to load a Thompson submachine gun.

Although that night of Sept. 22, 1954, was a vivid experience, Eidson recalls living across from the prison for seven years seemed "normal."

The exception may have been having three inmates as trustees doing laundry, cooking and doing yardwork.

Offenders with life sentences often made the best trustees, he explained, because that was the top reward for good behavior.

As a Christian family starting a new life in the home provided by the state, Eidson said, "we came in and tried to understand why these people were there."

The home saw a darker period, too, when Warden Elbert Nash committed suicide in the house Dec. 18, 1964. Overcrowding and racial violence were only a few of the issues of unrest within the prison system in the early 1960s.

The United Press International wire service story said "death came about 24 hours after he had been criticized in a preliminary legis­lative report.

"It is painfully apparent," the report said, "that Warden Nash is wholly lacking in ad­ministrative ability and leader­ship to fill the post he holds."

Since at least 1925, 722 E. Capitol Ave. had served as the deputy warden's home. Residents included Leslie and Daidy Rudolph, Martin and Lulu Lee and Thomas and Edna Scott.

Then in 1948, Warden Ben Stewart and wife, Loma, moved there. At least through 1979, the home served as the Warden's House for Elbert and Florence Nash, Harold and Claudia Swenson and Donald and Alice Wyrick.

Before that, the wardens had lived at the corner of Lafayette Street and Capitol Avenue, locally known as the Marmaduke House. That home at 700 E. Capitol Ave. became the house for the Superintendent of Penal Institutions.

"In the early days, (warden) was a significant political appointment," local historian Mark Schreibers said. "The warden carried weight; he was second to the governor because he controlled the labor, before the merit system.

"The Warden's House is a heck of a perk along with a nice salary."

That also made the home a prominent place for social gatherings and decision-making sessions, Schreiber said.

The two-story brick American four-square house was built about 1900 and is listed on the National Register of Historic Places as part of the Capitol Avenue Historic District.

Because most factories and properties within that area were built with prison labor, it likely inmates helped build the home like many of its neighbors.

After the state quit using the home for the warden, it was purchased by Doug Dorris, a prison minister, according to the city nomination.

"Dorris along with his family lived in the house and would let prisoners stay for a short period of time in the basement and on the third floor when they were released," the city nomination said.

James and Sandra Boeckman bought the property in 2000. After extensive renovations, it serves as offices for six statewide associations.