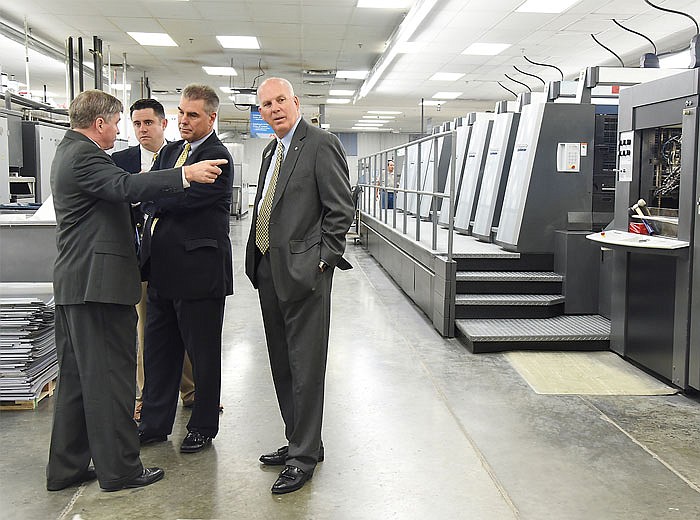 Greg Meeker, left, talks to representatives of Central Bank who were at Modern Litho Monday morning for two announcements. Meeker is vice president of sales and marketing for MLP and talking to Clay Broughton, David Minton, middle and Terry Higgins, about the expansion the local print facility is about to undergo.

After two years of efforts, Cole County leaders have finally earned the Certified Work Ready Community status, something they say will help recruit and retain a more highly skilled workforce.

"This is what it takes to compete in a modern economic world," Nixon said to those gathered before heading on a tour of Modern Litho's facility. "The more highly skilled workers we have, the more high-paying jobs will be created, it's just that simple."

According to a news release, the Certified Work Ready Community (CWRC) designation "aligns workforce training programs with the economic development needs of communities, matches appropriate applicants to jobs based on skill level, and strengthens businesses by strengthening the workforce."

In order to obtain the certification, Cole County had to complete several established goals concerning the number of job seekers who obtain a National Career Readiness Certificate and the number of businesses engaged in recognizing or supporting the initiative in their hiring practices.

The CWRC status makes communities more attractive to businesses, and the benefits from CWRC certification include:

Workers better understand what skills are required by employers and how to prepare themselves for success.

Educators have better tools for closing any skill gaps students may have.

Economic development organizations are better equipped with an on-demand reporting tool to promote the quality of their workforce.

One of the unique features of Cole County's efforts was offering workplace training assessments to offenders in the transitional housing unit at the Algoa Correctional Center. Nixon said 93 percent of those who took the assessments earned the National Career Readiness Certificate and, of those, 84 percent have obtained employment.

"We understand people make mistakes, have to do their time, but really we have a joined responsibility to make sure that we are party to them beginning their lives again and giving them the tools," Nixon said, adding that programs like this help reduce recidivism and provide stable income to families who need it. "This pilot project is being looked at by our Corrections Department and workforce division on how to replicate it at other facilities throughout the state."

"This community is a testament to the notion that we are only as strong as our weakest members."

Shelle Jacobs, business and industry relations director for the State Technical College of Missouri, who also led a committee of community leaders in gaining the CWRC status, said the program begin in March 2015 when they went to test 18 offenders at Algoa, all of whom passed the test and received the National Career Readiness Certificate. Since then, Jacobs said 270 offenders have been tested.

"No one in the country, as far as we know, has attempted this," Jacobs said. "These guys are smart and they're capable, they just need a second chance."

Jacobs said 103 Cole County businesses have signed a document stating they understand the program and how it can benefit them.

Part of Nixon's announcement also included discussion of Modern Litho's plans to expand its current facility on Stertzer Road by an added 21,600 square feet to house additional production and warehousing.

The expansion is part of Modern Litho's efforts to add a fourth press and 50 new jobs, which led the Jefferson City Council to authorize a seven-year industrial revenue bond to the company in April to allow it to purchase a Heidelberg XL106 10 Color + Double Coater Perfecting Press while paying only 25 percent of the personal property tax that would be owed on the new equipment based on its assessed value.

Modern Litho has pledged 50 new jobs over five years as a result of this expansion and Nixon said Monday the company would seek to hire those who had earned the National Career Readiness Certificate first.