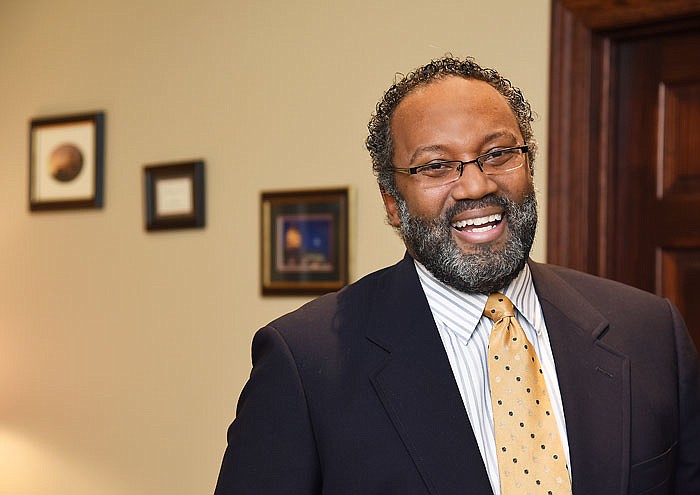 Rod Chapel remembers it like it was yesterday - a conversation with his father, a small contractor.

"He talked about having to hire a lawyer and we were going to go to court," Chapel recalled. "And I said, 'OK. And we're going to win?'

"And he said, 'We'll have to wait for the judge, or the jury, to make their decision.

"So, I understood the power of the judicial system, at a very young age, for fixing wrongs."

That conversation planted the seed for Chapel's decision to become a lawyer.

"I'm a trial lawyer who cares," he said. "I saw (my dad) get pushed around by larger companies. Sometimes it was because he was a small guy, and that's what they do to small contractors.

"Other times, it would be because he was a person of color. But I understood the strain it put on him as a person, as a businessman and, particularly, as a father and a provider,

"And I wanted to figure out how to fix that."

After graduating from Tulane University's law school in 1995, he worked for then-Missouri Supreme Court Judge Duane Benton, who now sits on the federal 8th Circuit Court of Appeals.

"I did that for three years, first as his clerk, and then as his judicial executive assistant," Chapel said.

Benton also is a CPA, and that background was part of Chapel's inspiration to earn an LLM ("like a master's degree in law," he said) - which focuses on taxation issues and allows a lawyer to be a teacher, too.

In August 1998, Chapel moved to Kansas City to work on part of the national Tobacco Settlement Agreement.

In 2005, he returned to Jefferson City, to be general counsel, then a division director at the state Revenue department. He later worked at Labor and Industrial Relations and, eventually was named a member of the state's Administrative Hearing Commission.

All of his experiences have been fodder for his continuing interest in the work of the NAACP, the National Association for the Advancement of Colored People.

Chapel, 46, grew up in several towns in Oklahoma - some segregated, some mixed and some predominately white.

Injustice happens when people tell you you can't do something because of the way you look, the religion you practice or the person that you are, he said.

He acknowledged many in today's society point to advances made since the 1960s and think minorities should "just get over it" and not keep fighting.

"I think there are good reasons why people change and evolve," he said, "but we need to make sure that we do that consistently - and that takes effort. We are one society, one people.

"We are all of the human race - just because we don't necessarily understand the dynamics of certain segments of society would not be a reason to walk away from them. I think we've got a much richer existence if we're all together and enjoy each other."

Chapel grew up hearing the story of his father working on his parents' cotton farm, then making extra money by helping a neighbor pick their cotton.

"But the money that they made in 1953 was sent to the NAACP, to help fund the litigation that became known as Brown versus the Topeka Board of Education," Chapel said, referring the landmark U.S. Supreme Court case declaring racially segregated schools
unconstitutional.

"My grandmother was an educator as well as a farmer, and that topic of 'separate but equal' was very close to her," he added.

So being active in the NAACP, he said, "is something that, I would say, is pretty ingrained in me."

He became president of the NAACP's Oklahoma State University Branch more than 20 years ago.

When he first came to Jefferson City, he was an NAACP member but not active in leadership. He became more active after moving to Kansas City and stayed active when he returned to Mid-Missouri.

He succeeded his father, Nimrod Chapel Sr., as president of the Jefferson City Branch.

And this year - after an unsuccessful effort two years ago - Chapel became president of the NAACP's state organization.

"The NAACP was founded on traditional American values," he noted, "life, liberty, the pursuit of happiness, being able to keep your property and the fruits of your labor.

"We're saying, 'Apply these to the segments of society that have been left out and have not been allowed to participate - or have to participate on some separate level.'"

He sees the state organization stepping up its presence at the Capitol, especially when lawmakers are in-session.

And he said the NAACP needs to be more active in communities around the state.

People of color, other minorities and women "are a microcosm of Missouri and, to the extent that we're not doing well, Missouri's not doing well," he said.

"The idea has been that, if we can get in a room and start talking about the issues and what's wrong they're going to want to find some way to fix that."

Chapel sees the NAACP's role as helping U.S. society get "better," by "changing what we can change, while we can. The NAACP is for everybody."