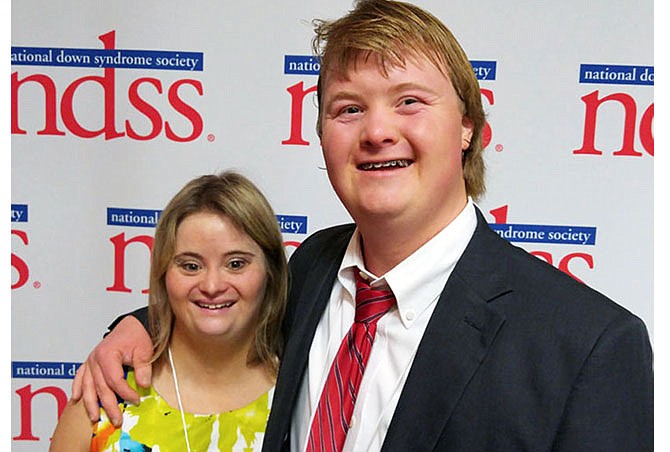 Elijah Mayfield, 20, of Jefferson City, stands with Kayla McKeon, of New York, at an event in Washington, D.C. Mayfield and McKeon were selected as the recipients of the National Down Syndrome Societyâ€™s 2016 Champion for Change: Self Advocate of the Year award.

Elijah Mayfield may be one of the busiest people in Jefferson City â€” working at the governorâ€™s office, aiding Helias Catholic High School student-athletes, busing tables and greeting customers at Paddy Maloneâ€™s Irish Pub, volunteering at St. Maryâ€™s Hospital and recently being the face of the Special Learning Center for United Way of Central Missouriâ€™s fundraising campaign.

Like the â€œCheersâ€ theme song, it seems no matter where the 20-year-old goes, everybody knows his name.

Diagnosed with Down syndrome, Mayfield has led a life defined by him â€” not his condition. Advocating for change for others like him, Mayfieldâ€™s reach goes beyond the local community, and heâ€™s recently been recognized for it.

This year, the National Down Syndrome Society (NDSS) honored Mayfield as its 2016 Champion for Change: Self Advocate of the Year. The annual award goes to someone with Down syndrome who â€œworks tirelessly for him or herself and all people with Down syndrome,â€ said Sara Hart Weir, NDSS president.

She nominated Mayfield for the honor because of his work in Gov. Jay Nixonâ€™s office, advocating for people with disabilities, and participation in the Buddy Walk, an annual event in Washington, D.C., to raise awareness for Down syndrome.

â€œHeâ€™s smart, heâ€™s driven, and heâ€™s extremely passionate about the work he does on a daily basis and his advocacy work, trying to make the world a better place for people with Down syndrome,â€ Weir said.

When Elijahâ€™s father, Todd Mayfield, gave his son the news, Elijah said he couldnâ€™t believe it. He was so astounded, he made his father show him the email for proof, then tears flowed.

â€œIt was really cool,â€ Mayfield said. â€œWhen he told me about it, I was shocked. I was crying. It was so cool that I was recognized.â€

Elijah and Todd Mayfield traveled to D.C. to receive the award earlier this month. While there, they met with U.S. Sens. Claire McCaskill and Roy Blunt, both of Missouri, and participated in the Buddy Walk. It wasnâ€™t Mayfieldâ€™s first trip to the nationâ€™s Capitol, though.

During his senior year at Helias, Mayfield journeyed to Washington, D.C., with other advocates from St. Louis, Kansas City and Springfield to promote the Achieving a Better Life Experience (ABLE) Act, legislation that allowed those with disabilities to save money for expenses related to their disabilities.

They tried to reach McCaskill in her officeâ€™s conference room, crowded with automobile dealers. As their window of opportunity to speak with the senator was narrowing, Todd nudged his son to speak up about the legislation.

Elijah approached the senator, asking for her support.

â€œWould you do it for me?â€ Todd said his son asked McCaskill.

While waiting for their plane ride home, the advocates took advantage of a serendipitous moment, running into McCaskill, who happened to be on the same flight. There, Elijah and Todd took the opportunity to further explain the bill, which later passed in 2014.

The father-son duo also advocated for the ABLE Act in Missouri, where it became law a year following the federal passage. Todd testified at a House Ways and Means Committee hearing. At the bill signing event in Cape Girardeau, the Missouri governor mentioned Elijah in his speech.

That recognition, media attention and activity on social media kept Elijah on the NDSS radar for the Self Advocate of the Year award, Todd said.

Congressman Blaine Luetkemeyer introduced Elijah at the awards luncheon. He wrote about Elijah in a recently published News Tribune column, stating: â€œElijah is a remarkable individual, and having the opportunity to spend time with him and his family is something that I will always remember.â€

In his acceptance speech, Elijah thanked Luetkemeyer, the NDSS and his parents, who have worked to give their son every opportunity possible.

As strong believers in early intervention, Todd and his wife, Pam, enrolled Elijah at the Special Learning Center at 4 months old. He continued learning and developing there until age 6. Elijah then went to St. Peter Catholic School, where he made lifelong friends who were also invested in his development.

â€œMy parents have always given me big support throughout my life and with going to St. Peterâ€™s,â€ Elijah said. â€œThey always help me get into schools. I look up to (my dad) and how much he has helped me throughout the years, since I was born. My parents both treat me with good respect.â€

When it was time for the class of 2010 to prepare for high school, the then-eighth-grade students worried about what was next for Elijah. Many were moving on to Helias, which didnâ€™t have a special education program at the time. Through collaboration with the school, Elijahâ€™s parents enrolled him along with his St. Peterâ€™s classmates, who helped him progress throughout school.

At Helias, Elijah earned seven varsity letters through his work on the football, basketball and baseball teams. He graduated in 2014. Community support, Todd said, is the reason Elijah is the success he is today.

â€œThereâ€™s such a stigma that comes with a diagnosis of Down syndrome, it can be very frightening,â€ Todd said. â€œWe wanted to break those stereotypes and raise positive public awareness as much as possible so when people think of Down syndrome, they donâ€™t think of it as a negative. They realize these folks have tremendous potential. Because of their challenges, itâ€™s a blessing for us, as parents, to get to see life before their eyes. We realize how much we take for granted in our lives.â€