Governor's Mansion has been shaped by history, personal touches of governors 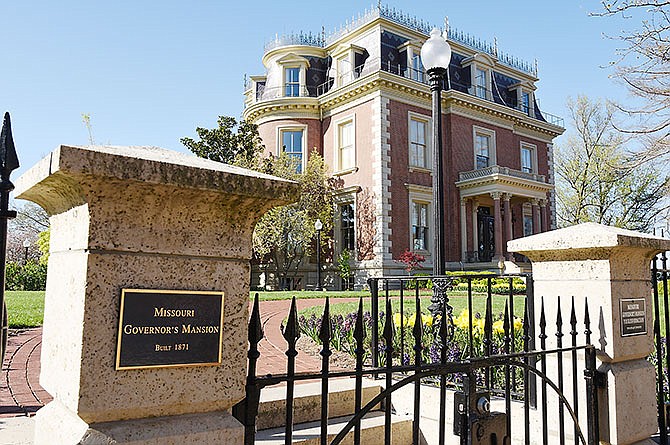 Pictured in this April 2016 photo is the Missouri Governor's Mansion in Jefferson City. The historic mansion has been shaped by personal touches of past governors.

To live in this house is to have a handclasp with history, First Lady Geraldine Dalton (1961-65) said of the Missouri Governor's Mansion.

The distinguished brick home sits on the same bluff where Missouri's first legislative session was held in the Capital City in 1826. The riverview bluff has been home to three executive mansions.

A Victorian home with Italianate and French influences, the three-story mansion is topped with a unique-to-Jefferson City Second Empire Mansard roof. Inside, it originally featured gas lights, dark woods and ornate carved finishing.

Cole County Rep. John Wielandy introduced the bill to build the current mansion, which was approved prior to the Civil War. After the conflict, and when Gov. B. Gratz Brown refused to reside in the second executive mansion, the current mansion was built with labor from penitentiary inmates and citizen volunteers.

The front doors are hand-carved walnut, weighing one-ton each, and hang on German silver hinges.

The stone wall with iron fence, along Madison Street and Capitol Avenue, dates back to the first executive mansion built on that corner in the 1820s.

Throughout its 145 years of service, the home has seen deaths and births, weddings and funerals, and many interesting figures.

Just days after Gov. Brown moved in in 1872, he entertained Grand Duke Alexis, of Russia, and, not long after, King David, of Hawaii.

Just a decade before, the mansion's fate was in the balance. Proposals ranged from converting it to a museum to simply tearing it down, Hamilton reported.

Windows rattled and portraits bounced when trains passed on the nearby Missouri Pacific (now Union Pacific) Railroad. Chunks of plaster were falling from the dining room ceiling, and rags were stuffed in holes and windows to block the winter wind.

But in the end, it remained the official residence of Missouri governors " and today is one of the oldest continually used governor's residences in the nation.

Major renovations were made during the Lloyd Stark administration (1937-41), led by Theodore Wofford, of St. Louis.

"There may have been grandeur of another day in the mansion as it stood, but now it has attained simple beauty and cheerful hominess with no loss of dignity of historic atmosphere," Hamilton wrote.

Brown (1871-73) initiated the tradition of each governor's family leaving a gift to the mansion. His gift was the four pink, granite columns of the front portico, which were quarried from his mine in Iron County.

The sunken garden, designed by Kansas City's Howe and Howe Landscape Architect, was added by the Stark family, with rose and rock gardens. The pergola was constructed by WPA in 1938. And the site was renamed the Carnahan Memorial Gardens in 2001, after Gov. Mel Carnahan's death Oct. 16, 2000, in a plane crash.

Another tradition at the Governor's Mansion has been special Christmas events.

The David Francis family (1889-93) instituted the first children's party. But Christmas under Gov. William Stone (1893-97) was remembered for his Kentucky whiskey-eggnog.

Families of inmates were invited to the mansion for Christmas during Gov. Joseph Folk's (1905-09) tenure. And the Herbert Hadley family (1909-13) shared their German heritage with lebkuchen and springele.

The Christopher Bond family (1973-77 and 1981-85) chose to light with candles during the energy crisis. And the Joseph Teasdale family (1977-81) invited the disabled and sheltered workshop employees as special guests.

Each spring, about 40,000 Missouri fourth-graders visit the Capitol, and many of them include a tour of the Mansion on their schedules.

That organization was renamed Friends of the Missouri Governor's Mansion a few years ago.

Caulfield reconditioned the old summerhouse on the bluff

Added to the National Register of Historic Places