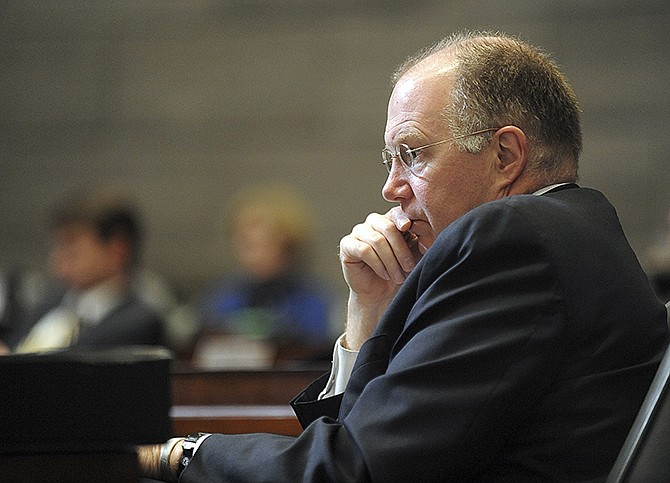 Former Sen. Carl Vogel, R-Jefferson City, listens during a 2010 presentation on the floor of the Missouri Senate. Vogel has been diagnosed with pancreatic cancer.

He died at Barnes-Jewish Hospital, St. Louis, with his family at his bedside.

â€œI thought I had the flu,â€ he told the News Tribune during an interview in March 2015, just three weeks after receiving the diagnosis. â€œI was in bed for several days, thinking I had the flu â€” but none of the flu symptoms followed with my initial reaction.

â€œAnd, then I realized that I couldnâ€™t get out of bed without holding on to something â€” and thatâ€™s when I went to the hospital, and they did blood work.â€

In an email last July, Vogel said â€œLIFE is GOOD!â€ â€” after explaining he had just completed â€œ8 of the baddest chemo treatments within a very aggressive time schedule.â€

In November, he said in another email: â€œWe (recently) had a wonderful family trip to San Francisco, (and now have) resumed chemotherapy. And my 14th round is next week, God willing. Life was Good today and will be Better tomorrow!â€

Vogel graduated from Helias High School in 1973, then earned a bachelorâ€™s degree from the University of Missouri-Columbia.

He began full-time employment in the family business, the Jefferson City Coca-Cola Bottling Company, in 1978 and was named its president in 1983.

He was proud to be â€” and often talked about being â€” the fourth-generation family member to be employed by the company.

Vogel was active in numerous organizations, including the Jefferson City Area Chamber of Commerce, serving as its board chairman in 1988; the Jefferson City Housing Authority from November 1989-October 1997; Lions Club; Rotary International; and the Jaycees.

He was a member of St. Josephâ€™s Cathedral and the Knights of Columbus.

Vogel won election to the Missouri House in 1990, serving the west side of Jefferson City and Cole County from 1991-2003, when he moved to the state Senate after winning the seat in the November 2002 election.

He represented Cole, Callaway, Moniteau, Morgan and Miller counties in the Senate from 2003-11, when term limits forced him to leave the Legislature.

Freeman Mortuary will publish Carl Vogel's complete obituary on Sunday in the News Tribune and NewsTribune.com. Also, a news story planned for Sunday will look at Vogelâ€™s legacy to the community and the state.