Rally round and round the Capitol 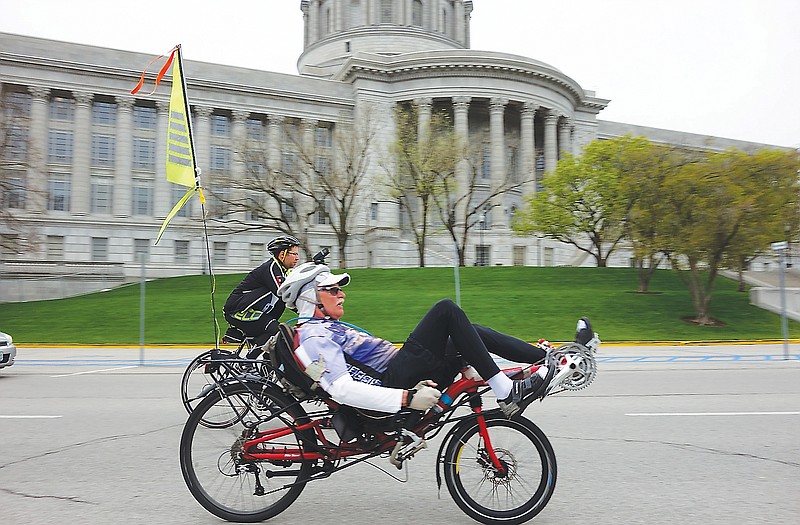 Springfield cyclists Ray Van Ostran, foreground, and David Rice were among those cycling around the Capitol over the weekend in advance of today's Missouri Bicycle and Pedestrian Federation advocacy day at the Capitol. Among other things, they are opposing a bill that would require cyclists to have 15-foot poles mounted on their bikes with flags on top. They also oppose a bill that would allow disabled residents to use ATVs on the Katy Trail.

Cycling advocates rode 98 miles around the Capitol over the weekend to represent the 98 cyclists killed in Missouri since 2000.

They came from different parts of the state in advance of today's Missouri Bicycle and Pedestrian Federation (MoBikeFed) advocacy day, which includes the annual Legislators Bicycle Ride at 12:30 p.m.

Their ride also was to bring attention to their opposition to a bill requiring cyclists to mount 15-foot poles topped with flags on their bikes when riding on county lettered roads.

David Rice, who works for the Springfield public schools, said safety legislation for cyclists is needed, but the pole and flag requirement will make things worse, not better.

"It's such a ridiculous idea. There's no good reason for it," Rice said. His passion for cycling recently led him to start a new bike tour business, Veloziped Konditioning.

Rep. Jay Houghton, R-Martinsburg, has said he filed the bill after hearing concerns from his Callaway County constituents about cyclists riding on hilly terrain. The pole/flag requirement would make cyclists more visible from a distance or when on hilly terrain.

The bill hasn't gained traction: A committee hearing has yet to be scheduled.

"It's virtually impossible to ride a bike safely with that thing on there," said Gene Addler, another Springfield cyclist who rode on Sunday.

He said winds would either blow the 15-foot, flag-topped pole into other lanes or would adversely affect cyclists' ability to keep their bikes steady.

Rice said lawmakers need to focus on bills that would help safety, such as a requirement that cyclists have lights on the back of their bikes in low-light conditions.

Issues such as that, he said, are "reasonable, smart issues that I think a lot of cyclists would be behind. I don't think any of those would cause harm to cyclists, and the 15-foot pole ... would cause harm."

The cyclists also were protesting another bill filed by Houghton that would allow disabled residents/seniors to ride ATVs on the Katy Trail during certain days/times.

Other options for those groups of people already exist, including powered wheel chair, electric bikes, recumbent cycles, even adult trikes - bikes with two wheels the back and one in front.

MoBikeFed's other legislative priorities this year include:

• Opposing a proposed bill to ban bicyclists from many state highways

• Supporting increased penalties for bad/dangerous drivers who injure or kill