Culkin stepping up as receiving threat for Missouri 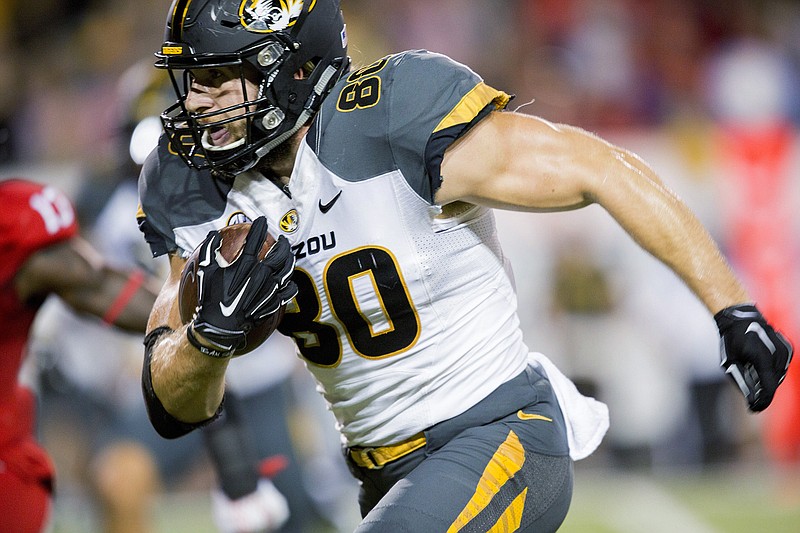 Missouri tight end Sean Culkin heads toward the end zone for a touchdown during the third quarter of Saturday night's game against Arkansas State in Jonesboro, Ark.

COLUMBIA - Sean Culkin didn't celebrate the first time he caught a pass in the end zone this season.

Before hauling in a 5-yard pass from Maty Mauk on Sept. 5 against Southeast Missouri State, Culkin had tip-toed along the back of the end zone, which left him with a hunch.

"I had a feeling it was coming back," Culkin said.

Sure enough, a flag was thrown for illegal touching - meaning Culkin stepped out of bounds - and Missouri settled for a field goal.

Saturday was a different story.

As the third quarter was winding down at Arkansas State, Mauk stepped up in the pocket on third-and-5 and flipped Culkin the ball as he evaded a tackler. Five Red Wolves pursued, but the junior tight end bolted 21 yards for a touchdown, a light tug on the back of his jersey the only challenge.

This score he could enjoy, leaping to give receiver DeSean Blair a chest bump and receiving a hug from center Evan Boehm.

"Just to see him and the face he made after he scored, it was something that we're looking forward to a lot more of," Mauk said.

Culkin anticipated having an increased role in the passing game this season after Missouri lost its top three receivers from 2014 to graduation.

Culkin's receiving numbers against Arkansas State were the highest of his career: five catches for 46 yards. His touchdown, which gave Missouri a 24-17 lead, was the second of his career.

"He's a guy that not many people want to get in front of when he's running full speed into the end zone," Mauk said of the 6-foot-6, 245-pound Culkin. "He was going to get himself in there and he made a good play on it."

Mauk and Culkin have been roommates the past year. Mauk, also a redshirt junior, said he is more confident in Culkin as a receiving target this season.

"His freshman year, he was a guy that wasn't going to redshirt until he kind of broke his hand in camp," Mauk said. "Now he's kind of back to the old Sean that we've been waiting on. He's a guy - he's going to catch the ball, he's going to get yards when he catches it, and he's going to be tough to take down. ... He's definitely somebody we want to get more involved."

Culkin's injury, actually a broken finger, kept him out his true freshman year, and he had just one catch for 6 yards as a redshirt freshman when he dealt with more injury problems. This past spring camp, Culkin suffered an AC joint separation in his right shoulder.

"It's tough because you can't get the reps physically," Culkin said. "I'm sitting there, I'm getting mental reps ... (but) you've got to do it personally to get better."

As a sophomore, he was named Missouri's starting tight end and had 20 catches for 174 yards. He began this season atop Missouri's current roster in career yards and receptions. In fact, his 180 career receiving yards were four times the total held by Nate Brown, who led wide receivers with 45 career yards on five catches.

"You definitely saw that coming in," Culkin said, "that it's like, "Oh, a lot of big playmakers from last year are gone.'"

Now, with Culkin healthy and, coach Gary Pinkel believes, more confident, he is in a position to become one of those playmakers himself.

"He's going to make some plays," Pinkel said. "He's physically paid the price as far as preparation and strength and speed and quickness and all those things. It's neat to see him do that.

"We need that from him, so it was really nice that we got that performance from him. And I think we can get even a lot more."