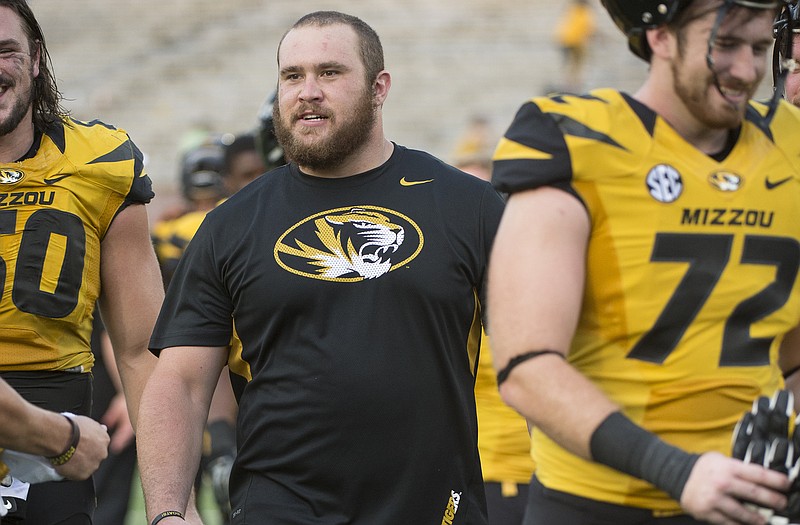 COLUMBIA, Mo. -A handful of streaks are on the line today as the Missouri Tigers take on Arkansas State in their first road game of the year (6 p.m., WatchESPN).

For one, the Tigers haven't lost a true road game since November 2012. They haven't lost a regular season game in their last seven tries, either. And then there's Evan Boehm's 41-game streak of making a start on Missouri's offensive line.

Though the biggest streak the Tigers, ranked No. 21 in both the AP and the coaches polls, are hoping for is a 2-0 start to the season.

"It's going to be another tough game for us," Boehm said. "It's hard to win in Division I football, no matter who you go against. It's going to be at their place, at a night game, with their season opener. So I know they're excited, and I think we're just as, if not more, excited."

Boehm and fellow offensive captain Russell Hansbrough were injured on the opening drive of Missouri's 34-3 win against Southeast Missouri State last Saturday. The tailback and center are both questionable for today's game with ankle sprains.

Head coach Gary Pinkel said he did not know whether Boehm or Hansbrough would play against the Red Wolves, but both seniors expressed confidence they would be back.

Boehm is currently eighth on Missouri's all-time list of consecutive games started. Carl Gettis, Adam Spieker and Martin Rucker each started 50 straight games. Boehm is closing in on Missouri offensive line coach A.J. Ricker's mark of 47, set when he was a lineman for the Tigers.

"I maybe jinxed myself," Boehm said. "Because I was joking around with coach Ricker. I said, "Man, six more and I've got you,' and then the day after, it happened. But I'm going to be here. I'm going to be in, and there's no stopping me."

Sophomore Alec Abeln played in Boehm's place at center during the second half of Saturday's game. Abeln had just recently made the move from backup center to starting left guard. Abeln took snaps at both positions this week, but he doesn't doubt Boehm's toughness.

Hansbrough's injury came as he was tackled out-of-bounds following a 20-yard rush on his first carry of the season.

Pinkel is currently in his 15th year as Missouri's head coach, a stability Arkansas State hasn't seen for quite some time. The Red Wolves had five head coaches and an interim coach from 2010-2014. Although, the rapid turnover was a result of Arkansas State's success. The Red Wolves went to the GoDaddy Bowl every season from 2011-2014 and went 35-17 overall in that span.

Hugh Freeze left to coach Mississippi after a 10-3 campaign in his lone season in Jonesboro. Gus Malzahn went 9-3 in his only season before leaving to coach Auburn to a BCS title game appearance. Bryan Harsin stopped by for an 8-5 season before moving on to Boise State. Current coach Blake Anderson is the first Arkansas State to coach consecutive seasons since 2010.

"It's a good football program," Pinkel said. "They do a really good job down there, and (Anderson) is doing a great job also, so hats off to them. This will be a difficult football game, as all are."

In 2013, Arkansas State made the trip to Columbia for the first half of the home-and-home deal. The Tigers won 41-19, though they only led by three points entering the fourth quarter. Quarterback James Franklin led Missouri with three touchdowns on 21-of-30 passing, and Hansbrough gained 96 yards on eight carries. Arkansas State actually had more first downs than Missouri and led the time-of-possession battle as well.

The Red Wolves are currently trying to bounce back from a 55-6 loss at No. 8 Southern California last weekend.

"I think the score was very misleading," Pinkel said. "If you watched the film ... I think they really played really well. When you have four turnovers to zero, I think it kind of gives you misinformation about how close the game really was in terms of just execution on both sides."

"Even last week in a game that got more lopsided from their standpoint, all the way until the end they were flying around, playing hard and tackling hard," Henson said. "You look at that and you're impressed by it. I think they're pretty aggressive with what they do. I think they're very well-coached in disguising kind of their looks and making different coverages look the same, and they do a good job. I've been impressed by them. We'll have to play well to win the game."

Pinkel originally wanted to play the game at a neutral site in St. Louis, but he still expects to see some black and gold at Centennial Bank Stadium.

"That's where they wanted to play the football game, and so that's where it is," Pinkel said. "That's just pretty much what I've always done. Once the decision's made, that's where we play. That's what we do. It's a road game. It's a very, very important football game for us, like all the non-conference games. We've got a lot of fans right down in the bootheel there. We've got a lot of fans down there in the St. Louis area that's relatively close to that area, so hopefully we can get some fans down there rooting us on a little bit, too."

Missouri's 10-game road winning streak is the third longest in the country, behind only Ohio State and Florida State. Missouri's last loss in an actual road game came at Texas A&M on Nov. 24, 2012 - though the Tigers have lost two neutral-site games since then, both SEC Championship games in Atlanta. Missouri's last regular-season defeat was a 34-0 loss to Georgia last October.

Notes: Senior receiver Wesley Leftwich returns to his starting position after missing last week's game with a knee injury. ... Freshman Terry Beckner Jr. was listed as a co-starter with defensive tackle Josh Augusta, and Walter Brady was listed as a co-starter with Marcell Frazier at defensive end. ... Missouri and Arkansas State have played three times before, with the Tigers winning all three. Missouri won 52-20 in 2004, 44-17 in 2005 and 41-19 in 2013.