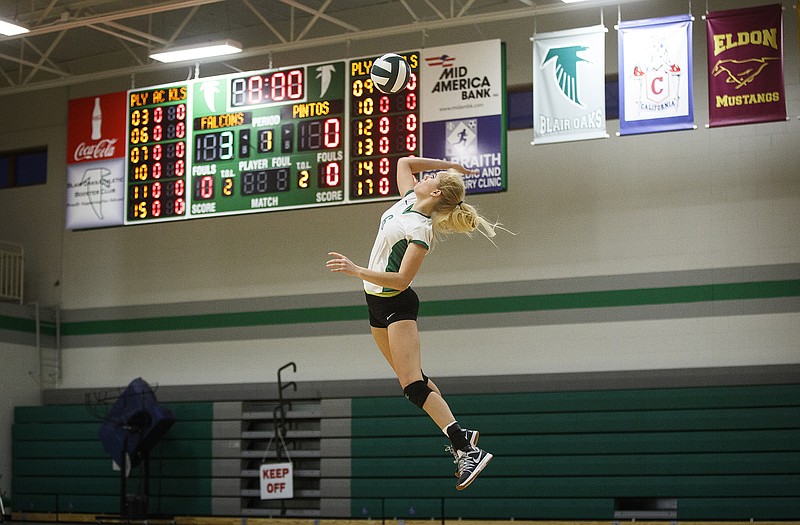 Alexa Stegemann of Blair Oaks belts a serve during Thursday night's match against California in Wardsville.

The junior had a match-high seven kills as the Lady Falcons stayed undefeated with a 25-16, 25-12 defeat of California.

"Ryan came to play tonight," coach Joy Northweather said. "She was down a little bit against Eldon, struggled a little bit with her timing, and tonight she just came alive. She was going up against an open net and putting the ball away, and that's what the middle's got to do."

Blair Oaks got off to a 8-2 lead, but the Lady Pintos rallied to win seven of the next 11 points to get within 12-9. The Lady Falcons responded with a 9-3 run of their own to take command of the set.

Dudenhoeffer, who also led Blair Oaks in blocks, had four sideouts in the set to prevent California from turning short rallies into long ones.

"I felt the drive," Dudenhoeffer said.

The first 11 points scored by the Lady Pintos came off Blair Oaks errors. California secured its first kill at 17-12 on a hit by Gracie George.

"We've been struggling with some errors, but I liked what I saw tonight and on Tuesday night," Northweather said, referring to Blair Oaks' win at Eldon. "The intensity's up. I'll take aggressive errors."

In the second set, the Lady Pintos hung with Blair Oaks until 10-8, when the Lady Falcons won 10 of the next 12 points.

Allison Maxwell was second on the team with six kills. She and Dudenhoeffer provided Blair Oaks with plenty of weapons inside.

"In practice, we feed off of each other and try to make ourselves better," Maxwell said.

Northweather added: "At a school our size, you're lucky to have just one strong middle (player). And what I can say about these girls is they've put their heart and soul into it, and what they've become, all of them, is the hours and hours of effort that they've put into it and work that they put into it."

Paige Rackers made her return to the floor Thursday after missing time with a knee injury.

"I love having Paige," Maxwell said. "She's a force to be reckoned with, and I love having her on the court."

Northweather was also glad to have the junior back.

"She's got one of the hardest swings we have on the team, pounds the ball," Northweather said of Rackers. "She does a great job. It's just a matter of getting movement. She's wearing a brace for the first time, so she's going to have to get used to the movement and how it changes her mobility a little bit. But she's incredibly quick, incredibly strong. ... When you have a team already, to add that into the mix is going to be hopefully very huge for us."

"We lost, but I was happy with what the girls did," California coach Julie Bailey said. "We had better passing than we've ever had, we had better defensive digs than we've ever had and our hitters were on. I told the girls before the game, we can't have the errors with this team. We cut back our errors tremendously. It was just their good hitting that beat us."

California falls to 1-4 on the season. Blair Oaks improves to 6-0 with the win.

"They're just a great group of girls," Northweather said. "If one person's struggling, let's say they're struggling on contacting the ball solidly or just timing their hits, there's somebody right there to pick them up, go to another hitter. That's what has been our strength and will hopefully continue to be our strength."