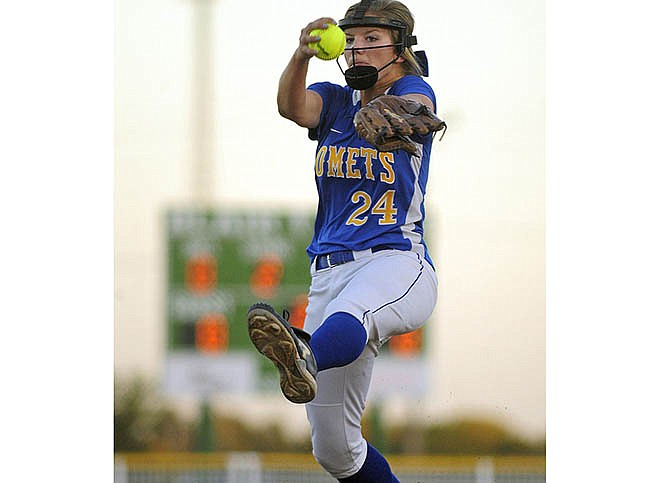 Fatima pitcher Macy Berhorst has turned into the staff ace as the Lady Comets return to the Class 2 Final Four.

SPRINGFIELD, Mo. - When the Fatima Lady Comets headed to the Springfield Invitational in late September, they brought with them a 9-7 record and a handful of questions.

Fatima played well in the 24-team tournament, winning three games and finishing fourth, but the Lady Comets decided they hadn't had enough.

"The girls after that tournament said, "Hey, we played good in Springfield. Let's come back in October,'" Fatima coach Dana Scheppers said.

The Lady Comets made good, winning all nine games since the tournament and earning a trip to the Final Four where they will have a chance to defend their Class 2 state title. Fatima faces Iberia in a semifinal game at 1 p.m. today at the Killian Softball Complex.

The trip back was an unlikely one. Fatima lost six seniors from its state championship team - all starters.

"Everybody kind of thought, "Well, this is going to be a rebuilding year for Fatima.' And these girls knew that," Scheppers said. "I think that drive, that they wanted to prove people wrong, stuck in their heads from Day 1."

Early on, starting-pitching duties were shared by a commission of underclassmen, and the batting order was in flux.

"Up until about halfway through the season, I kind of was switching people and didn't really have a lineup that worked," Scheppers said. "Once we hit the Springfield tournament, we came out on fire. Excellent defense came out, our bats came around."

As did Macy Berhorst, who established herself as Fatima's ace with a late-season surge. The sophomore pitcher allowed one combined run in the Lady Comets' sectional and quarterfinal wins, giving up just nine hits in 14 innings of work.

"She's definitely mixing it up well and keeping the batters off-balance," Scheppers said. "I think she is confident in her defense ... and when you have a pitcher on the mound that is comfortable with their defense, they're going to feel more comfortable and confident on the mound."

Equally crucial to the Lady Comets' playoff run has been shortstop Sammey Bunch. The senior hit a solo home run for Fatima's only run in a sectional win against Blair Oaks and smacked another solo shot to propel Fatima's offense to a 4-1 defeat of Centralia in quarterfinals.

"She's a great ballplayer, and she's in it for the love of the game," Scheppers said. "She does things that help the team out. Her getting hits kind of motivates the rest of the team and gets them going, too. I think they feed off of her energy."

Iberia will have to decide whether to pitch to Bunch or walk her intentionally, as some have done this season. Bunch moved to the leadoff spot in the lineup to make the decision even tougher for opposing coaches - and the choice to put her on first doesn't get any easier when you factor in Bunch's 39 stolen bases this year.

"If you walk her, she's probably going to end up on second," Scheppers said. "And what's great is when she gets on, (the) 2, 3 and 4 (hitters) can hopefully bring her in. That's why she's been moved to the leadoff spot.

"... Do you want to start the game with a leadoff walk by intentionally walking her? I mean, that's a hard decision for a coach to make, and I'm glad I don't have to make that one. I'm glad she's on my team."

Alongside Erica Fick and Erin Eichholz, Bunch is one of three returning seniors who started on last year's championship team.

"They came back on first day of practice and were like, "How awesome would it be to go back to state again? Two years in a row,'" Scheppers said. "That feeling was the best feeling that they have felt and they wanted to have that feeling again."

To repeat, the Lady Comets first will have to get past Ibera (24-3), which defeated El Dorado Springs and Willow Springs to get to Springfield.

"They've got a pretty good pitcher," Scheppers said. "Their defense is pretty good, and I hear the top of their lineup can hit. It's not going to be a cakewalk for us. I mean, we did beat two really good teams to get where we are, but they're in the Final Four for a reason."

Portageville (24-5) and Lathrop (25-3) make up the other half of the bracket. Portageville finished third last year, though Fatima did not face the Bulldogs. The Lady Comets beat North Platte 6-0 and Pleasant Hope 16-3 to take the title.

In September, the Lady Comets beat Nixa, Hillcrest and Battle in the Springfield Invitational before falling to Lee's Summit North and Camdenton at the Cooper Sports Complex, next door to Killian.

"They always joke around: "Maybe we need to take some Springfield dirt back with us,'" Scheppers said, "because we seem to play well in Springfield.'"

The third-place contest will be played at 5 p.m. today, with the championship game set for 2 p.m. Saturday.