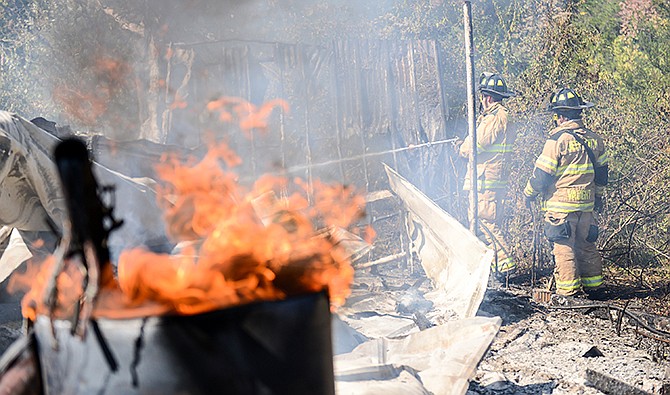 Firefighters work to put out an abandoned house fire Saturday on Morningside Drive. "It was fully engulfed when we got here," said Captain David Clark of the Jefferson City Fire Department. "There was no gas or electric connected to the house, it had been abandoned for sometime."

Fire investigators are trying to determine what caused the Saturday morning fire that destroyed an empty house at 118 Morningside Drive in Jefferson City.

The property, just south of the 1700 block of East McCarty Street, is owned by Gordon Brothers LLC.

Firefighters were called out at 10:25 a.m. Saturday, for smoke in the area - and found the unoccupied home to be about 75 percent involved when they reached the fire.

They said they confined the fire to the building. No injuries were reported.

The Cole County assessor's office gave the property an appraised value of $40,000, according to the website www.midmogis.org. Officials will determine a damage value as part of their investigation.