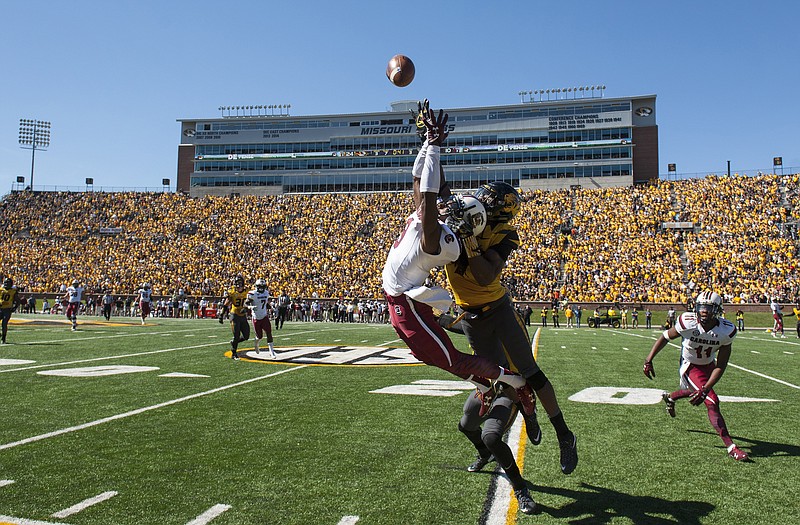 When Missouri and Florida met at "The Swamp" last year, the Tigers blew out the Gators in unusual fashion, gaining just 20 yards through the air and 119 total but still winning 42-13 thanks to six takeaways and four return touchdowns.

Missouri hosts No. 11 Florida today for the Tigers' Homecoming game (6:30 p.m., SEC Network), and though a repeat performance is unlikely, it will be no surprise if defense is again the name of the game.

Both the Tigers (eighth) and Gators (23rd) boast top-25 defenses in yards per game. Florida's defense forced four turnovers last week in a 38-10 upset of No. 3 Mississippi in Gainesville, Fla. A week after Rebels quarterback Chad Kelly threw for 341 yards and three touchdowns in a defeat of No. 2 Alabama, he threw for his lowest passing total all year against a Football Bowl Subdivision team.

Meanwhile, last Saturday brought the Tigers their first Southeastern Conference win of the year, a 24-10 defeat of South Carolina. Missouri (4-1, 1-1 SEC) forced three interceptions in the third quarter to help true freshman Drew Lock to a win in his first start at quarterback. Lock will be tested today against a difficult, and more complex, Florida defense.

The Gators are off to a 5-0 start in their first season under coach Jim McElwain, who took over after a 6-5 campaign by Will Muschamp.

We're "not surprised that they're good," 15-year Missouri coach Gary Pinkel said. "Everybody in this league is good. It's just the way the league is, the gauntlet of games that you play in being a member of the SEC."

The Tigers bounced back from a loss at Kentucky with their strongest running performance of the year last Saturday. Sophomore Ish Witter went for 98 yards on the ground, and Missouri took advantage of noticeably more running room to rush for 163 yards. First-string tailback Russell Hansbrough is still recovering from an ankle sprain suffered on his first run of the season, but he was able to carry the ball a season-high 11 times for 43 yards last Saturday.

Florida presents a difficult test for the Missouri running game. The Gators have allowed just 97.8 yards on the ground per game, 15th in the country. If the Tigers are able to continue their running progress, however, it would be a boon for Lock in his second collegiate start.

"Anytime you can run the ball, it helps you offensively, certainly for any quarterback," Pinkel said. "If your quarterback's experienced or a young quarterback, there's no question about it. It helps."

Lock was kept on a short leash in his first start. He completed 21-of-28 passes but threw for just 136 total yards. Offensive coordinator Josh Henson said the plan was to get Lock comfortable in the first half, and the second-half scenario - a two-score lead with a strong running game - led to an even less pass-heavy approach in Lock's final two quarters.

With an agressive Florida defense, Lock might have more opportunities this week to show what his arm can do.

"I trust Drew. It's not that I don't trust him. Really, a lot of it was kind of the way (South Carolina) played," Henson said.

"... But yeah, one thing that we have done around here pretty well is we've gotten the ball down the field in the passing game. When you play a team like Florida ... you've got to take shots down the field and loosen up the defense and take away some of their aggression, no doubt."

Though Henson said Florida uses a zone defense this season much more than it did under Muschamp, the Gators showed flashes of their defensive potential last season, as well.

"I thought they were really talented on defense in the years past, too," Henson said. "You looked at them and you thought, "Wow these guys have got some talent. They're big, they're strong and they're fast.' You look at them right now, and they're playing with a lot of enthusiasm, a lot of effort, flying around to the ball. ... They're going to be certainly a great challenge."

The strong Florida secondary is led by junior cornerback Vernon Hargreaves III, whose three interceptions are tied for most in the SEC. Hargreaves was a first-team All-American in 2014.

"He's one of the best corners we'll face all year for sure," Hill said. "Their safeties are very aggressive, a lot of returning veteran players that have played a long time, so you're just going to have to complete passes, from our quarterback's perspective, and maximize plays."

Notes: Junior quarterback Maty Mauk is suspended for the second straight game for a violation of team rules. ... First-string Missouri tight end Sean Culkin will miss his second straight game with a knee injury. ... Today's game with be Missouri first night game at home since the Tigers beat Texas A&M in 2013 to clinch their first SEC East title. ...Missouri will honor former Tigers linebacker Aaron O'Neal, who died 10 years ago after a voluntary team workout. O'Neal, a graduate of Parkway North in St. Louis, was a redshirt freshman at the time. His No. 25 has been passed down to a Missouri linebacker each year since his death, and Donavin Newsom - also a Parkway North grad - currently wears it. ... The Missouri football team won't be the only Tigers in action today. The wrestling team will hold at outdoor practice at 2:30 p.m. today on the West Lawn outside the Hearnes Center. The men's basketball team will also host an open practice from 2 to 4 p.m. at Mizzou Arena. Admission is free to the general public.