Missouri falls to No. 11 Florida 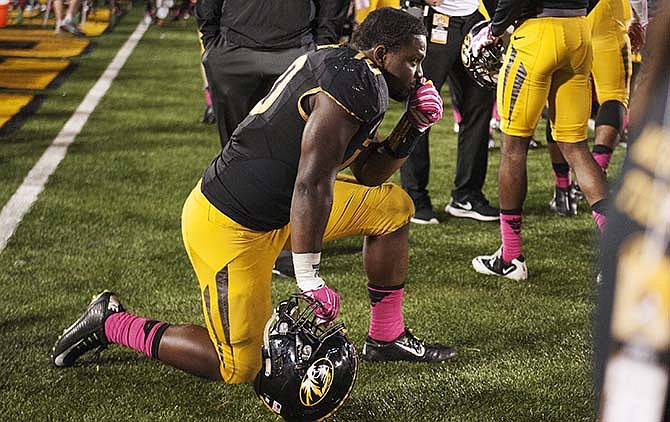 Missouri linebacker Kentrell Brothers reacts during the second half of an NCAA college football game against Florida, Saturday, Oct. 10 2015, in Columbia, Mo. Florida won the game 21-3.

COLUMBIA, Mo. - As the increasingly underwhelmed Faurot Field crowd waned Saturday night, so did the Missouri football team's dreams of a three-peat.

For the first time since 2012, the Tigers - the two-time defending Southeastern Conference East Division champions - dropped a second SEC game in a season, falling 21-3 to No. 11 Florida in the Homecoming game.

The Tigers' offense totaled 257 yards, managing just 12 first downs - only one of which came on Missouri's 13 third downs.

"They out-executed us," Missouri head coach Gary Pinkel said. "We were very poor on third downs, and most of them were third and longs. You give yourself a lot of long-yard situations, and it's not very good."

Missouri's defense continued to hold up its end for the most part, holding the Gators to 4.4 yards per play. Neither team scored an offensive point in the second half, punting a combined 12 times and turning the ball over twice on downs.

"We weren't perfect on defense, but we did a lot of good things," Pinkel said. "We went for a long time without any scores. We're going to take that way as a plus for us."

True freshman Drew Lock struggled in his second start at Missouri, completing just 16-of-39 passes for 151 yards and two interceptions.

The Gators wasted no time getting on the board, plowing through the Missouri defense for a 75-yard score in 12 plays on the first drive of the game. Kelvin Taylor punched in a score from 1 yard out to give Florida a 7-0 lead.

The Tigers answered quickly, gaining 19 yards on a Drew Lock pass to Wesley Leftwich, 8 yards on a Russell Hansbrough run and 32 more on a Lock-to-J'Mon Moore connection to reach the red zone three plays into their first drive. The Missouri offense stalled, however, and after Lock nearly gifted Florida an interception, kicker Andrew Baggett converted from 21 yards out to pull the Tigers within 7-3.

The teams then traded punts before Florida bounced back with a second scoring drive in familiarly easy fashion. Once again, Taylor capped the 3:57 march with a 1-yard touchdown run, the eighth play of the 82-yard drive.

Personal fouls devastated the Tigers in the first quarter. Nate Howard's unnecessary roughness helped along the Gators' opening scoring drive, and Terry Beckner Jr. - who was ejected last week after a targeting penalty - wasted a 3-yard sack with a facemask penalty on the Gators' second touchdown drive. As the first quarter came to a close, Grant Jones was flagged for unnecessary roughness to position Missouri at its own two, and the Tigers punted despite a Hansbrough run of 23 yards.

"We had three personal fouls today and all three were freshmen," Pinkel said. "I don't think they did any of them because they were certainly intentional in any way."

The teams each missed a field-goal attempt in the second quarter: Baggett from 53 yards for Missouri and Florida's Jorge Powell from 36 yards. Florida's miss came after the Gators took over following a Lock overthrow that was intercepted by Marcus Maye at the Tigers' 44. The pick was Lock's second of the season and the first since Missouri's win at Arkansas State on Sept. 12. The Gators drove 58 yards to the Missouri 17 on five plays at the end of the first half but ran out of time before they could add to their lead.

A week after their best running performance of the season, the Tigers struggled on the ground, running for just 106 yards on 26 carries (4.1 avg.). Missouri ran for just 42 yards in the first half.

Things didn't get any easier in the third quarter for either offense. Missouri and Florida exchanged three-and-outs for the first six drives of the second half. On the seventh, Florida cornerback Jalen Tabor returned Lock's second interception of the game for 40 yards, giving Florida a 21-3 lead.

Missouri finally got a first down on the next drive, a 13-yard pass by Lock to Emanuel Hall, but the drive ended in a punt four plays later. Florida, meanwhile, was held without a first down until its fifth drive of the half. The Gators got two on the drive, but turned the ball over on downs when Walter Brady sacked punter Johnny Townsend for a loss of 3 yards on an attempted fourth-down conversion.

The Tigers' first SEC loss of the season came Sept. 26 at Kentucky.