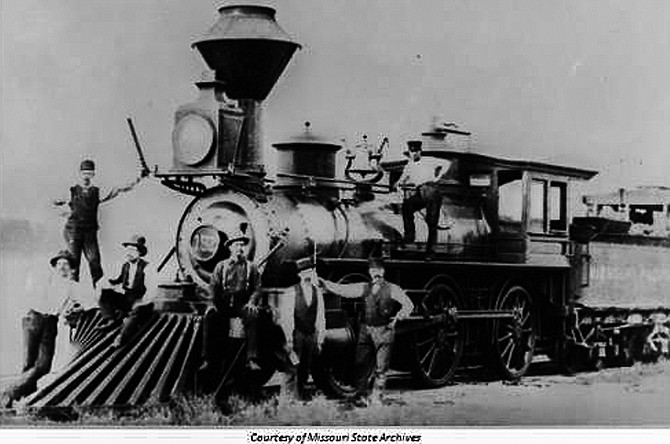 This photo of the Missouri Pacific train No. 152 shows men posed on and around it.

The cross-state route followed by the modern Amtrak passenger and Union Pacific freight trains sent the first commercial passenger, freight and mail trains through from St. Louis to Kansas City 150 years ago this week.

What Missourians may take for granted today was built in up-and-down economic times and despite destruction brought on by the Civil War.

The track had been laid 7 miles west of Warrensburg, 218 miles from St. Louis, and trains were running regularly to Warrensburg when Confederate Gen. Sterling Price's raid came through in October 1864, W.J. Burton wrote in his "History of the Missouri Pacific Railroad" in July 1956.

The Pacific Railroad was the first pioneer railroad west of the Mississippi River, chartered in 1849 and first operating in 1852, Burton wrote.

Although rail construction continued after the War Between the States began, there were regular setbacks with guerrillas and thieves taking their turns.

The final connection between St. Louis and Kansas City by rail would have been made in 1864, had it not been for Price's Raid through Missouri in the fall.

The booming construction labor had been run off, and the work west of Warrensburg, attempting to connect with the completed line at Independence to Kansas City, was suspended entirely, Burton wrote.

Price had ordered his Confederate troops to destroy every bridge west of Jefferson City.

The rebels also tore up miles of track and burned stations, including Osage, Lookout (today Centertown), California, Syracuse and Otterville.

"The rebels never made such clean work of any railroad in their progress through any state held by the national troops, as they did in destroying portions of this railroad," the Missouri Democrat reported Sept. 18, 1865.

About 810 miles of rail lines had been constructed through Missouri before the Civil War and most of it had been damaged during the war, said Thomas Gubbels, who teaches Missouri history at Lincoln University.

"Missouri in 1865 was just beginning to recover from the wounds of the Civil War," Gubbels said. "The state was in the process of writing a new Constitution, violence still plagued rural areas, and physical evidence of destruction could be seen throughout Missouri."

The Pacific Railroad received further state aid and private capital to connect the road from St. Louis to Kansas, he said.

"Despite questionable financial practices and shady business practices, railroad mania swept through Missouri in the years following the Civil War, and an extensive railroad system allowed Missouri to grow and flourish in the 19th century," Gubbels said.

The railroad was essential to Missouri's future and the nation's commercial reach from coast to coast. It also provided employment for many displaced after the war, said John Bradbury, assistant director of the State Historical Society of Missouri Research Center-Rolla.

Although Kansas City had not yet become the metropolitan area it is today, linking that town to St. Louis was the start of great things for this state, he said.

"People were flocking to Missouri; it was the railroad frontier," Bradbury said. "Railroad fervor from the 1850s was stomped down by the Civil War, but it picks up with a vengeance."

The last rail to connect the 283 miles from St. Louis to Kansas City was laid at Little Blue on Sept. 19, 1865, "consummating what the road's earliest friends regarded at its inauguration as the Alpha and Omega in its progress and completion," Burton wrote.

A former St. Louis mayor, L.M. Kennett had turned the first spadeful of dirt for the Pacific Railroad July 4, 1851, at the east end of the line. And so, he assisted in placing the last rail at the west end at about 2 p.m. Sept. 21, 1865, Kansas City Journal Post said.

Company president George Taylor drove the final spike. Then, Kennett, Taylor and company vice president D.R. Garrison made speeches "congratulating the state upon the completion of a work to be forever the pride of the commonwealth," the Journal Post said.

A special train carrying Taylor, Garrison and many dignitaries left Kansas City at 3 a.m. Sept. 20, 1865, and arrived at St. Louis at 5 p.m. the same day.

The first through train from St. Louis arrived at Kansas City on Sept. 30, 1865, carrying other distinguished people including the railroad company's vice president and superintendent and top management from several other Midwest railroad companies. They traveled on to the west end of the line in Lawrence, Kansas.

Train enthusiast and retired railroad conductor Norbert Shacklette called the Missouri Department of Transportation, Amtrak and Union Pacific Railroad regarding Friday's historic anniversary. But to his dismay, none were planning to mark the occasion.

"I think it's a significant date in Missouri history," Shacklette said.

A timeline of Pacific Railroad's progress across the state: