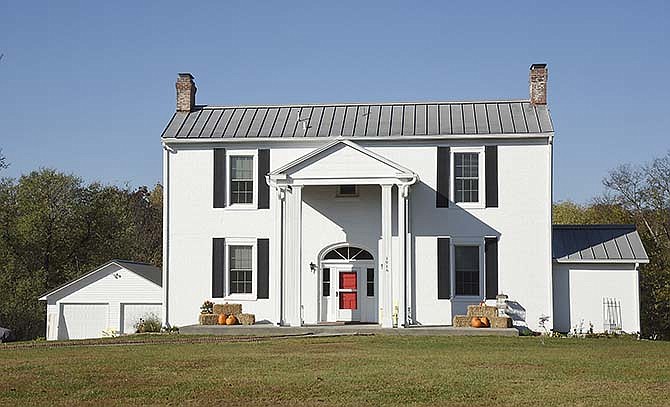 Shown above is the historic Bolton-Kelly home on Green Berry Road in Jefferson City.

Named a city Landmark in 2002, the Kelly-Bolton Home originally was built several miles outside the city limits, overlooking the Moreau River. 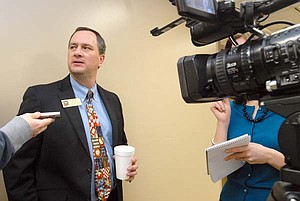 Photo by Karen E. Segrave
Arkansas Democrat-Gazette/KAREN E. SEGRAVE 3/1/10 Rob McGill, acting school superintendent for Pulaski County Special School District comments on not being voted in as the new super the during a meeting held at Monday night. The Pulaski County Special School District voted to reopen the search in hiring a new superintendent as the board voted 6-1 not offer the job to McGill.

The home was built in three phases between 1831-35. So the bricks were manufactured elsewhere and brought in for the more than a dozen slaves of Dr. William Bolton to use in construction.

The origin of those bricks is debatable.

In 1933, the Sunday News and Tribune said the bricks were made in Pittsburg, Pennsylvania, and shipped by steamboat. In 1965, the same paper said they were shipped by riverboat from Tennessee and in 1971 said the brick came from Kentucky.

The State Historical Society of Missouri's 1963 "Missouri Historic Sites Catalogue," however, says the brick was made by slaves in Callaway County, ferried across the river, and hauled five miles by oxen.

Regardless, Bolton built his ante-bellum Greek Revival-style home, following a similar plan used by his brother Lewis for a stone house near Wardsville overlooking the Osage River.

The brothers homesteaded the land about 1830. After building the home, Bolton bought an adjacent 160 acres, originally homesteaded by John Dunnica, in 1834. Eventually, he would amass about 450 acres.

Bolton and his, wife, Sarah came to Mid-Missouri with his siblings, cousins and grandmother - Catherine Dixon, who was buried in the Dixon Pioneer Cemetery, no longer in place in Apache Flats.

Once completed, the seven-room, L-shaped home served the family upstairs and Bolton's medical practice on the main floor. It is likely he treated both Union and Confederate soldiers there during the Civil War. Local historian Mark Schreiber said Bolton is thought to have treated confederate soldiers at his brother's house in Wardsville, too.

Several records indicate Dr. William and Sarah Bolton were southern sympathizers. But they also remained in good standing with the Union occupation.

Local legend holds that Gen. Sterling Price may have spent the night at the home Oct. 6, 1864. Price's 20,000 troops had burned the Pacific Railroad bridge over the Osage River and fired several buildings in Osage City before crossing the Moreau River at the end of that day.

The rebels used a battery of five guns on the Bolton Ferry Road against the small contingent of Union troops occupying the Bolton home. Military accounts described the Moreau River as "a small stream with muddy banks and bad bottom, four or five miles east of the city."

The Union troops fell back to fortify the Capital City, which Price ultimately chose not to attack.

"Casualties were suffered on both sides at the crossing and the confederates buried their dead along the river and then camped in the vicinity of the Bolton House," the 1971 Sunday News and Tribune said. "The deed to this property mentions damage done to the area by the numerous military men around."

Sarah Bolton kept a journal of expenditures and losses experienced as a result of the Union troops occupying their farm, Schreiber said. The late Jim McHenry, a descendant of the Boltons, told Schreiber that the widow turned in the information and received reimbursement for the damages from the government.

Dr. Bolton died in 1862. He was a graduate of the Philadelphia Medical College, and was the first physician at the state prison, when it had 19 inmates, and a charter member of First Presbyterian Church. He was buried in Old City Cemetery on East McCarty Street.

Sarah Bolton and her young family lived in the home until selling to Green C. Berry in 1865.

George Payne, who bought the property from the Berry family in 1939 to develop two subdivisions, said he found rifle shot on the property, too. And the 1956 article said foundations of the slave quarters were still visible at the time.

Green C. Berry grew up in Mid-Missouri. He served as deputy county clerk and deputy circuit clerk under Gen. Gustavus Parsons, who became his father-in-law when he married Virginia in 1855.

When Berry bought the Bolton place, it was 350 acres and he had 200 in cultivation.

Berry served two terms as Cole County sheriff and collector, beginning in 1870. He was the first sheriff to occupy the "new" jail, constructed in 1872 at the corner of East McCarty and Monroe streets.

One of the prominent men of his time, Berry died in the Jefferson City, Lebanon and Southwestern Branch Railroad tragedy near Russellville Dec. 18, 1881. Berry and other prominent citizens, including Christopher Wagner and Oscar Monnig, had hopped onto the flat car train loaded with iron rails for a "pleasure trip," the 1881 newspaper reported. The engine, running backward at about 19 miles per hour, left the track and plunged down an embankment on the return trip from Russellville.

The account described Berry as "a warm-hearted and generous man, liked by every one who knew him."

His survivors sold the property in a series of transactions from 1896-1900 to William and Nannie D'Oench. The widow D'Oench then sold the vast acreage to the developer Payne in 1939.

"The face of the land is changing and the encroachment of new houses and streets has already altered the scene," the 1956 Sunday News and Tribune said. "The gently sloping farm land of a few years ago has given way to a modern subdivision. A new and different way of life has left little room for the old, but the past lives on in the imagination of those who have been close to the land."

The Bolton's beloved brick home, however, remained. The road in front was named for Berry.

Another doctor would call it home for several decades. Dr. Marshall and Mrs. Kelly bought the home and about five acres in 1947.

The State Historical Society of Missouri's 1963 "Missouri Historic Sites Catalogue" said the porch with four columns was added in 1940 and interior changes were made from the original floor plan. The catalog praised the front door, which is now cared for by the home's current owners Bo and Marlene Bohanan, highlighted by a 10-foot-wide fanlight with two side windows.

The Kelly-Bolton Home also was among a short list of historic sites visited in 1970 by the Missouri Historical Society from St. Louis.

And in May 1974, the Kellys were among nine families recognized by the Cole County Historical Society for preserving historic homes. Dr. Kelly died in 1976.

The Bohanans bought the home in 2012 and have been updating and restoring it. The Historic City of Jefferson recognized their efforts in October with the Golden Hammer award.

Other contributing features include a large horse barn and other outbuildings and traces of an oblong riding track, the nomination said.

Behind the home is a natural spring, once a popular recreation destination for early Jefferson City residents.

"Through the past 167 years, the presence of the Dr. William Bolton home has contributed a sense of heritage to the Green Berry Road area near the Moreau River," said the city Landmark nomination.