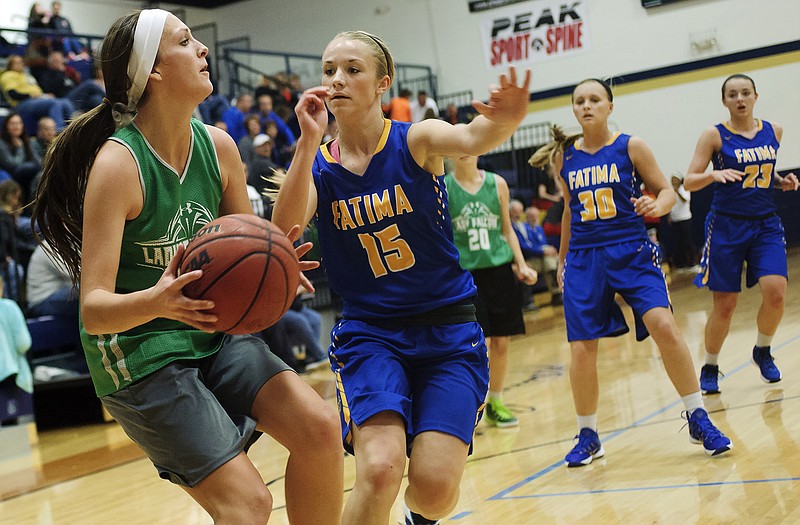 Blair Oaks Macyn Wilbers looks to dish to an open teammate as Fatima's Morgan Berhorst closes in during Friday night's Jamboree at Helias.

It was a rough start to the season for the Blair Oaks girls basketball team Friday. But the Lady Falcons showed an ability to double down, even if it wasn't quite enough.

Blair Oaks dropped all three of their 12-minute scrimmages in Friday's Jamboree at Helias. After losing 25-8 to Jefferson City and 28-6 to Helias, the Lady Falcons doubled their point total for the evening with a 19-14 loss to Fatima.

"We're disappointed that we didn't execute and play like we can," first-year coach Kevin Kohler said. "We've got some things to work on, but I think they're going to be competitive."

The Lady Falcons had a few players out of town, and another missed time with an injury.

Blair Oaks was held without a field goal in the first half of the scrimmage against Jefferson City. Kayla Jones led Blair Oaks with four points.

"Yeah, the first game we were extremely nervous," Kohler said. "I don't really know why, but we were. And we just have to have it in our head that we can go out and compete with anybody, and I'll think we'll be all right and execute and do the things that we practiced, and we'll be OK."

The Lady Falcons were also without a field goal in the first half of their second scrimmage, this one against the Lady Crusaders. Makenna Kliethermes and Grace Scott had Blair Oaks' only field goals.

"Like any scrimmage, it's just a learning experience," Kohler said. "Just like any game. You're just always trying to get better."

Against Fatima, however, Blair Oaks rebounded well from a 7-0 deficit. A 10-2 run, paced by two 3-pointers from Kliethermes, gave the Lady Falcons a 10-9 halftime lead. Kliethermes smoothly sent her jumpers in from identical spots behind the arc.

"She's a scorer," Kohler said of the freshman.

Macyn Wilbers had four points against Fatima, second most on the team. As an established upperclassman, Kohler said she had a bit of a target on her back.

"People just shut her down tonight, because who they think that's who we're looking for," he said.

The Lady Falcons return to Helias for their season opener Tuesday.

"It was nice to get out and battle against somebody besides ourself," Kohler said. "They're disappointed. They would have liked to have shown a little more, but they're a relatively young team, not a lot of experience, so that'll come. We've got some good athletes that I think can compete."

Additional coverage for this Jamboree:

Blair Oaks plays in Jamboree with less than full roster

Bunch stars for Fatima at Jamboree

Comets learning from losses in Jamboree

Lady Crusaders get Eagan era off on right foot

Jays cruise to wins at Jamboree