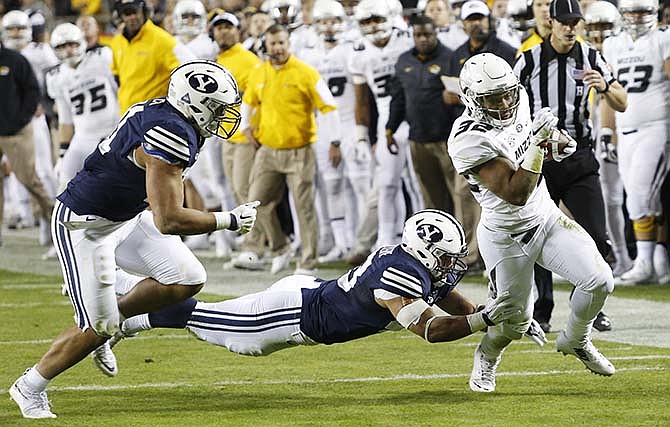 KANSAS CITY, Mo. - It started with a stance, it ended with a dance.

Missouri's tumultuous week - which included a team boycott, a slew of resignation announcements and a threat of terrorism on campus - came to a close Saturday night with a 20-16 Missouri win against BYU at Arrowhead Stadium.

After the win, Missouri's first in five games, the Tigers serenaded head coach Gary Pinkel with cheers of "G.P., G.P., hey!" as he broke out his "Pinkel dance" made famous after Missouri's 2014 Cotton Bowl win.

The win came just a day after Pinkel announced he would be retiring at the end of the season because of a non-Hodgkin lymphoma diagnosis he received in May.

"Because of all the circumstances," Pinkel said, "... it's one of the great games I've ever been a part of."

Just a week earlier, members of the team announced they would boycott team activities until system president Tim Wolfe resigned for his handling of racist events on campus. Pinkel professed his support for the strike a day later, and Wolfe and chancellor R. Bowen Loftin announced their resignations Monday. Tuesday night, threats of a shooting posted anonymously on a social media app sent Columbia into a stir.

And then Saturday, there was a football game.

"We wanted to do it for coach," linebacker Michael Scherer said. "We wanted to do it for everything the city of Columbia has been through, everything Mizzou's been through. We just wanted to show them that if we could rally around each other, no matter what our background, color, race, I think the city of Columbia, Mizzou can rally around each other, too, and do the same thing we did."

The Missouri offense had its best game of the season, gaining a season-high 434 yards and outpossessing the Cougars by more than 18 minutes. Freshman quarterback Drew Lock threw for 244 yards on 19-of-28 passing. Tailback Russell Hansbrough ran for 100 yards for the first time this year, going for 117.

Missouri had three drives of 4:30 or longer in the first half alone and more than doubled BYU's time of possession before halftime. In those three drives, the Tigers combined for 41 plays, 174 yards and 16:47. With 234 yards, Missouri covered more ground in the first half than it did in entire games against Georgia and Vanderbilt this year.

And yet, the Tigers had just two field goals and a 6-3 lead to show for it at halftime.

Missouri got things going offensively on its second drive, after punting four plays into its first. The Tigers, taking over from a BYU punt on their own 38, moved the ball into Cougar territory with a 25-yard completion from Drew Lock to J'Mon Moore. The Tigers then pushed their way down the field with five consecutive runs, converting two third downs, and giving Missouri a first-and-goal at the 9-yard line.

Moore caught a pass in the end zone on the next play, but it was called back for a clear pushoff, giving the Tigers a first-and-goal at the 24. Two plays later, Ish Witter fumbled on a 3-yard run that would've been called back by a hold anyway.

Missouri kept things going on the next drive, holding the ball for 5:22 this time. Cam Hilton got things going with a diving 15-yard grab, Witter ran for 18 on the following play. Hilton picked up another set of downs with a 13-yard screen, helped by a block from Emanuel Hall. The Tigers stalled once again near the end zone, but came away with points this time. An Andrew Baggett 23-yard field goal gave Missouri a 3-0 lead.

After a seven-play, 41-yard drive ended with a punt, the Tigers embarked on their longest drive of the year, in terms of plays. Missouri ran 18 plays on the 6:29 drive, the biggest being a 20-yard pass from Lock to Moore down the left sideline and an 11-yard Lock pass to tight end Jason Reese on third-and-7. Still, the Tigers were unable to find six points, with passes sailing through the hands of Nate Brown and Hilton in the end zone. Baggett's 34-yard field goal gave the Tigers the lead once again, and Missouri entered halftime up 6-3.

BYU, meanwhile, failed to get a first down until its final play of the first quarter. The Cougars' field goal came on a drive fueled by passes of 32 yards to Nick Kurtz and 35 yards to Francis Bernard. Missouri linebacker Kentrell Brothers broke up a third-down pass in the end zone to make BYU settle for 3.

Missouri found a stroke of luck to start the second half and abruptly threw it away. Driving down the field with ease, BYU coughed the ball up on a third-and-2 handoff, and Brothers recovered. After completing an 18-yard pass to Brown, however, Lock gave BYU the ball back on an underthrown interception, which Micah Hannemann returned 29 yards.

The Tigers shot themselves in the foot again after forcing a fourth down. A delay of game call on Walter Brady for moving abruptly gave the Cougars a first down instead of a field-goal attempt from Missouri's 21. BYU needed just three more plays to score the game's first touchdown on an 11-yard run by Algernon Brown.

The Cougars returned the favor, however, on the ensuing drive. A 49-yard Witter catch-and-run followed by a personal foul on Hilton gave Missouri a first down at BYU's 27. On third-and-7, Lock lofted a ball into a sea of blue jerseys, with Kai Nacua pulling in an interception. The Tigers were bailed out however, by a pass interference call on Michael Davis, who was needlessly holding down Missouri receiver Wesley Leftwich.

Given fresh life, Missouri promptly fumbled, but held onto possession. The Cougars lent Missouri a hand again on a third-and-goal play from the BYU 18. A short pass to Hansbrough was swarmed for a 6-yard loss, but a late hit on Lock with an accompanying targeting penalty gave the Tigers another first down. On third down, Lock found Moore on a fade for a 4-yard touchdown. It was Lock's first touchdown since Oct. 3, his first start.

BYU did little to shift the momentum, fumbling the very next play on a Marcell Frazier sack. Michael Scherer recovered the ball, and Missouri needed six plays - one of them a 23-yard scramble by Lock - to score on Hunt's 1-yard dive. It was Missouri's first two-touchdown quarter since Sept. 12.

BYU responded with a 10-play, 72-yard march in under three minutes. The drive was kept alive by a third-down pass interference by Logan Cheadle and an unsportsmanlike conduct by Kenya Dennis, also on third down. Mangum found Bernard for a 6-yard touchdown pass, but Trevor Samson missed the PAT, keeping the Missouri lead at 20-16.

Missouri's ensuing drive knocked just 2:10 off the clock, but BYU was unable to take advantage. The Cougars got an 11-yard Remington Peck catch to start the drive, but it was followed by three straight incompletions. The Cougars punted, and, thanks to a 19-yard Brown reception, a 23-yard Hansbrough rush and a 16-yard Sean Culkin grab, they never got the ball back.

Missouri kneeled twice to close out the game, and Pinkel didn't make it through his post-game interview before his players rushed in, chanting his initials.