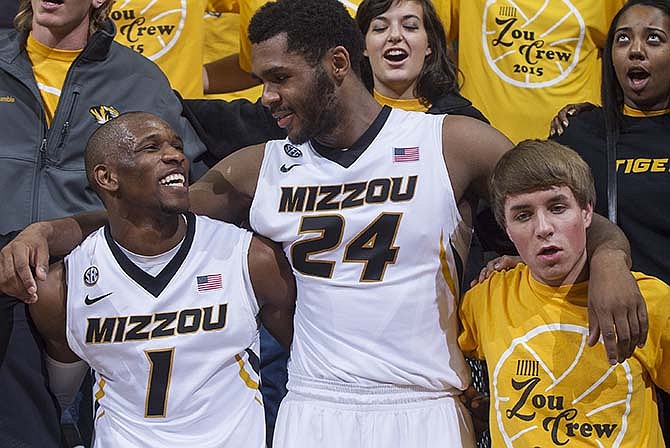 It may have found a new one Friday night. 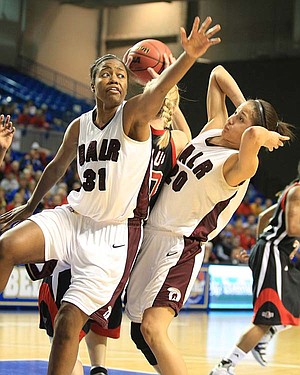 Photo by Staton Breidenthal
Arkansas State&#x27;s Lyndsay Schlup (middle) comes up with a rebound as UALR&#x27;s Britteni Williams (left) and Chastity Reed avoid a collision during their game in the Sun Belt Conference tournament Sunday in Hot Springs.

Kevin Puryear scored 20 points in his college debut, leading Missouri to an 83-74 win against Wofford in the Tigers' season opener.

"I've got to be honest, he's been playing like that," Anderson said of Puryear. "... He's played pretty well in practice. The great thing about Kevin is he just plays so hard. He's got a little confidence in his shot. His mid-range is good. He's really one of our better post-up guys. He's played well since the day he walked on campus."

The last game Puryear played at Mizzou Arena that counted ended in a state championship for Blue Springs South. He shot 8-of-14 on Friday, and added five rebounds as well.

"That's a pretty good kickstart to a career right there for that young man," said Wofford coach Mike Young, who said his team wasn't quite prepared for Puryear's size.

The Tigers didn't seem all that concerned with looking back, though. Missouri shot 56 percent from the field, which also would have been a season-best last season.

"I don't like to think about last year too much," sophomore guard Namon Wright said.

He meant it, too. He couldn't even remember if the Tigers lost their season opener last season.

"Yeah, we did," Anderson informed him. "I've been reminded several times."

In that game, Anderson's debut, the Tigers were upset by Missouri-Kansas City.

"It sure feels better than it did 365 days ago," Anderson said of this year's opener.

The Tigers started slow, missing five shots and committing three fouls before they scored a point. Kevin Puryear got Missouri on the board with a jumper at 16:48 for Missouri's first points of the season.

Once they got going, however, the Tigers put the pedal to the floor, going on a 20-2 run after Wofford began things with a 8-2 stretch.

"It was a big confidence booster for us," Puryear said. "The bench was crazy, the atmosphere was crazy."

The Terriers were left out in the cold for a spell, making just 2-of-10 shots from the floor at one stretch, while the Tigers hit 16-of-22 shots during an extended spurt of hot shooting.

Puryear scoring 11 points on 56-percent shooting in the first half with a three and a dunk thrown in for good measure. Russell Woods got hot, too, scoring all nine of his points in less than three minutes during that 20-2 run. He hit all four of his field-goal attempts in the first half.

"He's the bunny, man," Anderson said of the transfer from John A. Logan College, referring to the Energizer battery mascot.

Missouri's lead reached as many as 13 at one point, and the Tigers went into the half up 39-29.

It was a back-and-forth affair in the second half. For a more than 10-minute period in the second half, neither team went on so much as a five-point run. The Missouri lead dipped into single-point territory 10 times but Wofford couldn't get any closer than five.

"We just couldn't get that stop," Young said.

Wofford was plagued by poor shooting in the second half, too, making just 2-of-11 in one stretch.

The longest run of the half was a seven-point stretch from Wofford, which Wright ended with a 3-pointer. The sophomore had 18 points on 5-of-7 shooting, hitting 3-of-4 behind the arc.

Tigers hit 10 of their last 11 free throws down the stretch to close out the win, which left Missouri with a winning record for the first time this calendar year.

Note: Woods' fellow transfer from John A. Logan, junior guard Martavian Payne, stepped away from the team to focus on his studies, it was announced earlier in the day. "Martavian Payne came to me requesting he take time away from basketball to concentrate on his academic pursuits," Anderson said in a release. "At this time, I agree that is in his best interests, as his academic success is our main objective. We will continue to monitor and evaluate Martavian's status going forward." ... Missouri's highest scoring total last year was 79 in a loss to Auburn. The last time the Tigers scored 80 in a non-exhibition was Mach 18 2014 in a 85-77 National Invitation Tournament win against Davidson. Frank Haith was Missouri's coach at the time. ... Anderson spoke about Gary Pinkel, who announced earlier in the day he would be resigning at the end of the year because of health concerns: "Well, I think coach Pinkel has done so much for this school, and he's won a lot of football games, and that's probably what we all focus on, but Gary Pinkel the man has done a lot for this school. When you think about, obviously the winning of the games and the bowl games and all that - I'm going to miss him. He's been great to me, and he's been very supportive of me when I needed support. He's been very good to me. My main thing with him is I just want him to be happy and healthy."