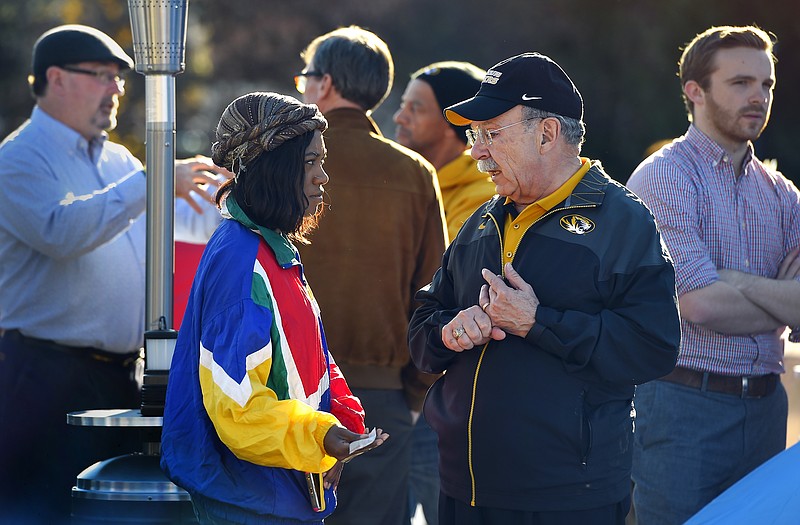 University of Missouri chancellor R. Bowen Loftin (right) speaks with an unidentified person Sunday at the location where student protesters have put up tents on the campus in Columbia.

COLUMBIA - The University of Missouri football team will refrain from practicing until Missouri graduate student Jonathan Butler's hunger strike comes to an end.

Missouri head coach Gary Pinkel tweeted a photo this morning of the entire team - coaches and white players included - with the caption "The Mizzou Family stands as one. We are united. We are behind our players. #ConcernedStudent1950 GP."

The hashtag makes reference to a group of Missouri students currently supporting Butler in his protest of Tim Wolfe as University of Missouri system president.

The football team did not hold practice Sunday and said there would be no formal team activities held all day.

"Our focus right now is on the health of Jonathan Butler, the concerns of our student-athletes and working with our community to address this serious issue," the statement reads in part. "... We are continuing to have department, campus and student meetings as we work through this issue."

The statement added further comment would be provided Monday when the team meets holds its scheduled weekly media availability.

Wolfe, who has been criticized by student groups for his response to a series of racist acts on campus, also issued a release today. It was his first public comment since black members of the football team announced Saturday on Twitter they were going on strike from team-related activities in support of Butler.

Wolfe's statement did not address the team's strike, but instead said his administration is working on a series of initiatives to combat systemic racism at the university.

"It is clear to all of us that change is needed, and we appreciate the thoughtfulness and passion which have gone into the sharing of concerns," Wolfe said in the statement. "My administration has been meeting around the clock and has been doing a tremendous amount of reflection on how to address these complex matters."

Wolfe was seen inside Missouri's University Hall on Sunday evening, where University of Missouri curators John R. Phillips and Ann Covington were seen entering the hall.

Phillips said he had driven in from Kansas City on Sunday and believed other curators were driving into Columbia to spend the night and the board might have a meeting Monday. Covington, who is based in Columbia, said she did not know when there would be a meeting. She said a meeting was not being held Sunday but she was entering University Hall to meet with colleagues.

Later, the curators announced via press release that a meeting would be held Monday at 10 a.m.

Butler expressed earlier in the day his displeasure with Wolfe, tweeting "Extremely unsatisfied. He still has no true plan for change. We deserve a leader who actually cares" and "Marginalized students STILL aren't being taken seriously by Mizzou officials. We won't be complacent with you "looking into strategies.'"

The steering committee of the Forum on Graduate Rights also spoke out against the statement and encouraged graduate workers to stage a walk-out Monday and Tuesday.

Governor Jay Nixon also released a statement today just before the noon hour, saying, "Racism and intolerance have no place at the University of Missouri or anywhere in our state. Our colleges and universities must be havens of trust and understanding. These concerns must be addressed to ensure the University of Missouri is a place where all students can pursue their dreams in an environment of respect, tolerance and inclusion."

Attorney general Chris Koster said in a statement today, saying, "I encourage the Missouri Board of Curators to condemn any acts of racism occurring on MU's campus, and to commit to quickly address future incidents. I also encourage the immediate formation of a task force to address issues raised by Concerned Student 1950."

Missouri's next game is against BYU on Saturday at Arrowhead Stadium in Kansas City.

The team announced its strike Saturday with a photo of Butler and more than 30 black players locking arms. The photo was tweeted out by a number players, safety Anthony Sherrils being the first, and the university's Legion of Black Collegians.

The message accompanying the photo said the players would not participate in team-related activities until Wolfe resigned or was removed "due to his negligence toward marginalized students' experiences."

The Associated Press contributed information used in this story