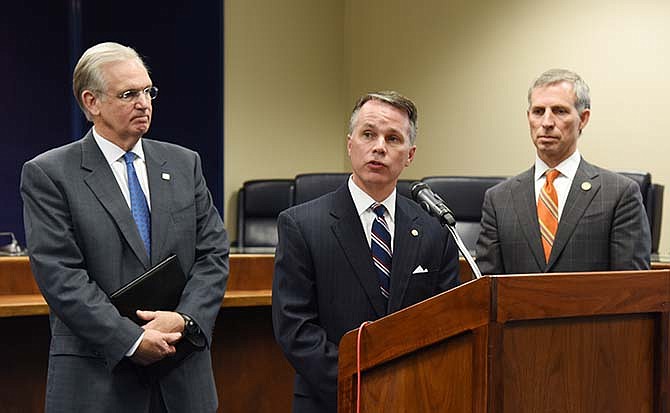 McKenna, 49, described himself as "an optimist at heart" and said he's looking forward to becoming a part of MoDOT.

"I'm excited about the prospects of working here with such a great team," he told Thursday's news conference. "We have many people in the New Hampshire DOT who have tremendous respect for the work that the team here at MoDOT has done over the years.

"I couldn't be more pleased to be here - it's a tremendous challenge."

McKenna resigned Monday as the appointed deputy commissioner for New Hampshire's Transportation department, and will have to move about 1,120 miles from Concord, New Hampshire, so he can start work at his new job in Jefferson City on Dec. 7.

He brings a varied work experience to MoDOT.

He's been involved with state transportation issues in New Hampshire for a little more than three years.

But he spent 13 years working in the U.S. Senate's Office of the Secretary of the Senate, rising to chief financial officer before leaving the federal government to become a business owner.

And McKenna also has worked in a not-for-profit agency.

Miller said the six-month-long nationwide search for a new director "reflected the desire to seek the very best talent to lead Missouri forward," and he acknowledged the state doesn't necessarily have the greatest selling points.

"One could look at Missouri and say, "You keep talking to us about your critical bridges and your roads,'" Miller said. "'You've been letting people go, and downsizing. You lack resources.

""What would attract people to come here?'"

But the answer is simple, he told reporters, MoDOT employees and area business representatives.

"What attracts people to come here is the promise of the future," he explained, "the fact that we have a great organization of talented people.

"We enjoy wonderful executive leadership through our governor - Missouri is a good place to come."

Miller said MoDOT's commissioners "are confident that we have found ... the great leader to lead us forward."

He described McKenna as "a creative thinker and leader," and noted that in New Hampshire McKenna "has been in charge of those very areas that we can use leadership in Missouri. He was the person who was charged with going over to the Legislature and making the case for transportation.

"He was charged with speaking publicly about transportation. He had responsibility for innovation and technology.

"And he comes with a financial background as we face our funding challenges."

"You can't conduct a national search, as we did, without knowing that the organization is in very good hands while you focus your energies on that important task," Miller said, leading the audience of several dozen people in applauding Broeker's work.

While McKenna will be living in Missouri before the end of 2015, his wife and three children won't make the shift until next summer - after his children finish the current school year.

"We'll transition as a family out here this summer," he said. "So, we'll be doing a little "commuting.'

"I've done that before - when we transitioned from Washington to New Hampshire, I commuted for about 2Â½ years."

Gov. Jay Nixon told Thursday's news conference: "Roads and bridges are the arteries of our economy.

"Whether it's farmers getting their products to market or parents picking their kids up from school, our roads must be safe - they must be strong and they must be reliable."

Nixon said McKenna "is joining MoDOT at a pivotal time, and I know that his experience in both transportation and fiscal management will serve him well in this important role."