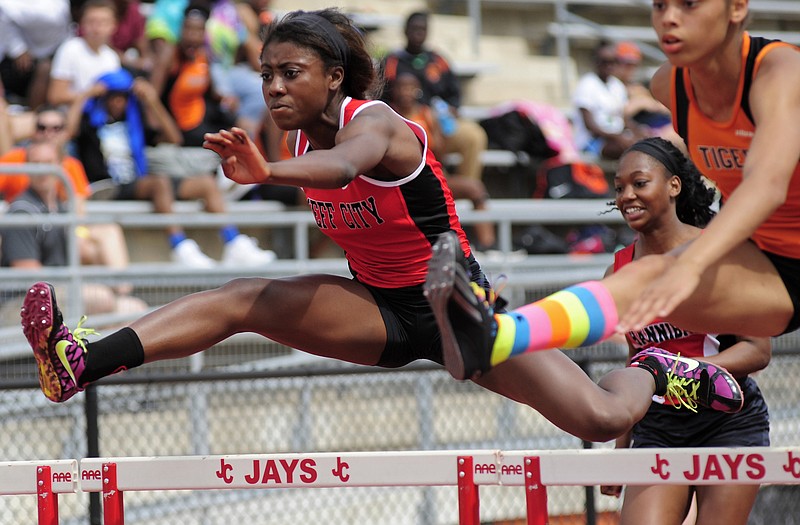 Louisa Nylander of Jefferson City will compete in the Class 5 110-meter hurdles in the state championships.

This weekend's state track meet will be Melvin Myers' first as the Jefferson City head coach, but the expectations haven't changed for a program that has won nine state championships.

"Our goal every year is to try to come home with a plaque," Myers said. "We have (11 competitors) going over there on the girls side and a lot of them have a chance if they have a good day, which we expect, because we want to peak at this meet. That's what all our stuff is working for, so our goal is - like it always has been here - to come home with something."

The Lady Jays are coming off their 17th district championship in the last 18 years. They finished sixth at state last year and had six all-state finishes.

Nicole Martin and Alexis Roberson are the Lady Jays' top seeds entering the state meet, seeded No. 1 in the high jump and shot put, respectively.

Martin is also a part of the Lady Jays' 4x100-meter relay team, which took sixth at state last year. Her sister, Kezia, was a state champion triple-jumper last year. Myers said Nicole will have a chance to avoid "living in the shadow" of her sister.

Roberson also qualified in multiple events, coming in with the third-best seed in the discus.

"Lexi has had a really good season all year," Myers said. "She's been rock and rolling. She broke the school record earlier in the season, then went ahead and broke it again in districts, so I think that she has a chance. She did not win disc at sectionals, but I think she has a chance to get going in both of those."

Roberson is one of three Lady Jays to qualify for discus. Roberson, Andrea Hughes and Jessica Rhoads finished second, third, and fourth in sectionals, respectively.

Emma Elwood, who finished fourth in the pole vault last year, qualified with the third-best height this time around. Lexie Stull qualified for the triple jump with a mark of 35-11.

"We do have some experience on the girls side," Myers said. "They have been over there."

On the boys side, the Jays had an abundance of youth this year, as their lone state medalist last year, Mervyn John, was a senior.

Jackson Schwartz has been one Jay to step to the forefront. The sophomore qualified in both the 1,600- and 3,200-meter runs. Garrett Parker emerged as a freshman and qualified in the 100-meter dash.

"There's just been a lot of them that just kind of battled together to help us fight to get where we're at," Myers said. "Them getting second in districts was big for us, just being so young."

Junior Jacob Gourley is the lone upperclassman competing for the Jays this weekend, as he qualified in the 800-meter run. Sophomore Brendan Bena will join Schwartz in the 1,600-meter run.

"(Bena) got a second life, I'd say, to go to the state meet, because a kid got DQ'd" in sectionals, Myers said. "He was fifth, and he gets to move on with that type of situation, so hopefully he takes advantage of it."

Though the state meet will be unfamiliar to the Jays, the setting won't. Reed is right across the street from the Jays' home at Adkins Stadium.

"It's a benefit for us, because we get to go to bed and do our same routine," Myers said. "We talk about that being our home across the street, and I think our kids perform well here."

Myers can also share his own experience as a state track competitor, as he competed in the 4x100-, 4x200- and 4x400-meter relays for the Jays. His advice?

"To never take it for granted," he said. "I was telling them that, because you never know if you're going to make it back over from one year to the next. And then take advantage of the opportunity that you have over there, because a lot of people would want to trade places with you to get there. I think that we have some young men and young ladies that will do that."

The Jays are a part of the state's first-ever Class 5 classification in track and field.

The realignment led to a new district Myers said was challenging. For instance, Martin's 17-foot long jump in districts would have finished second in the other half of the sectional. Instead, she finished eighth in districts.

"It was a tough district," Myers said. "You're going to see them sometime, so you might as well see them right away."

The shift to Class 5 also presents Jefferson City with a chance to do something the program has never accomplished - a difficult task when you consider how much history has already been written.

"When you look down these hallways and you see all the state champions, second place or whatever - this would be the first one in Class 5," Myers said. "It'd be something special."