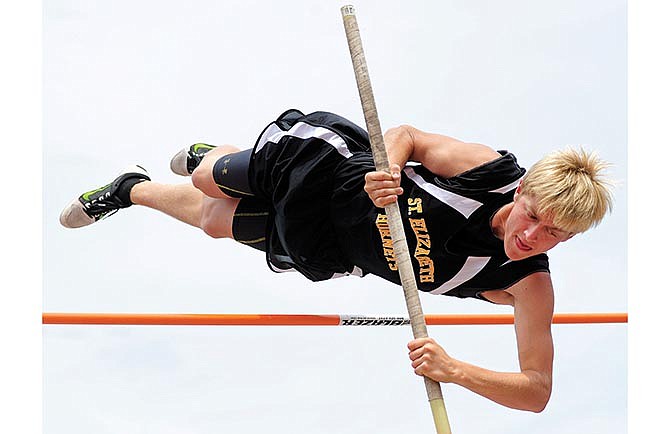 St. Elizabeth's Wyatt Stiles goes up and over the bar while competing in the Class 1 boys pole vault state championship on Saturday in Jefferson City.

Wyatt Stiles didn't meet his goal of winning the Class 1 boys pole vault Saturday. He did just about everything else.

The St. Elizabeth junior set a school record by clearing 13 feet to finish second at the Class 1-2 Missouri State High School Activities Association Track and Field Championships at Dwight T. Reed Stadium in Jefferson City. He broke his own school record of 12-6, which was set in sectionals.

"Well, (I was) shooting for first, but I would be happy with anything else," Stiles said. "Just being all-state is important."

Stiles was on the tail of state champion Matt Stump, a Jasper senior who cleared 13-9. Stiles said it didn't hurt to have Stump pushing him.

"He's just a really good vaulter," Stiles said, "and I'm glad that he ended up getting first."

This was Stiles' second year at the state meet. Last year he finished sixth in the event. Saturday, Stiles' best vault came on his second attempt at 13 feet. He set his first personal record of the day at 12-9 on his first attempt.

"I am happy with this whole track season," he said. "And looking forward to next year. Got one more."

Stiles' teammate Shanley Kliethermes also medalled in the pole vault. She cleared 9 feet for a sixth-place finish in the Class 1 girls contest.

"I've been working with her all through track season," Stiles said. "It's really great to see her improve."

Kliethermes didn't quite match her personal best of 9-3 from sectionals, but the sophomore said she enjoyed her first time at the state meet.

Wes Huhman was St. Elizabeth's second-best finisher of the day, finishing fifth in the 200-meter dash.

Huhman is a senior outfielder on the Hornets' baseball team and didn't run track until his junior season when St. Elizabeth track coach Erin Schaffer convinced him.

He competed in both track and baseball this spring. The Hornets reached their district championship game in baseball, and Huhman qualified for state for the first time in track.

Baseball usually took precedence for Huhman, because the Hornets had just nine players. The balancing act paid off.

Jamestown junior Mickayla Strother came just 13 hundredths of a second short of her goal of edging out Khristen Bryant of Columbia Independent in the 100-meter hurdles.

"She's always in every track meet I'm in, so I just tried to beat her," she said.

Strother was careful to get off to a good start Saturday.

"I was nervous the whole way through, because the first hurdle I've got to make sure I go over well," she said. "Otherwise, it's just bad from there on."

She was the lone Jamestown representative in the girls competition.

"I think it's pretty cool that I made it," she said, "but hopefully it helps our track team grow, seeing that you can get here."