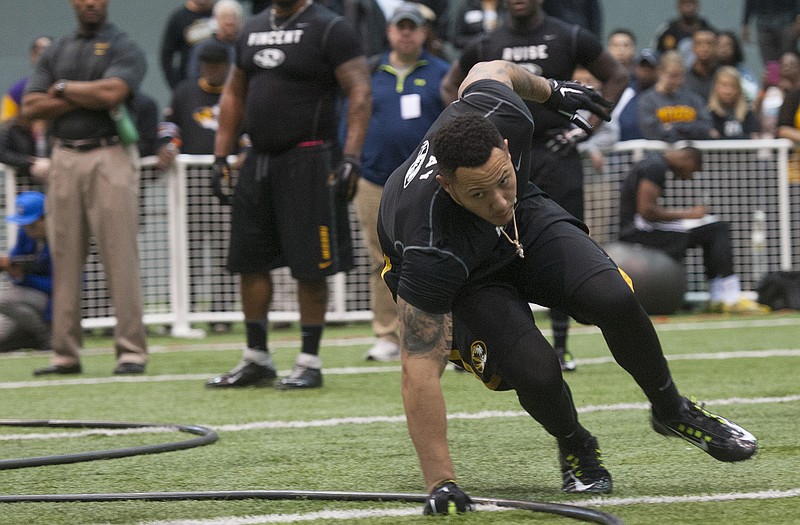 COLUMBIA - In 2014, Missouri's Pro Day was a spectacle, broadcast live on multiple networks and packed with media and scouts in attendance to see defensive end Michael Sam, who hoped to become the NFL's first openly gay draft pick.

This year, the historic implications were absent, but the hype sure wasn't.

Representatives of all 32 NFL teams trekked to the Mizzou Athletic Training Complex and Devine Pavilion to see the Tigers' newest batch of seniors - most notably another defensive end. Shane Ray, who, like Sam, earned Southeastern Conference defensive player of the year honors in his final season at Missouri, drew multiple documentary crews and a full squad of family members.

Thursday, he had plenty to prove.

Ray has been projected as high as a top-five pick in the upcoming NFL Draft. He set the school record with 131/2 sacks before declaring early for the draft. Because of a foot injury, Ray was not able to participate in most of the drills at February's NFL combine in Indianapolis, and with his foot at "90, 95 percent" healthy, Thursday was his lone chance to show just how well his speed translates from turf to stopwatch.

"I was a little nervous," Ray said, "but that's just because I was wondering, "OK, like, what drills are they going to have me do?' But I never questioned myself. I have faith in all my training that I put in this past couple months. I came out here, and I just relaxed and did me."

Ray's 40-yard dash was timed unofficially in the 4.6-second range, which didn't match his previous self-reported time of 4.44 but would have been good for third among defensive linemen at the combine. His cone drill, however, was clocked in the late 7s, which would not have cracked the top 15 among D-linemen. He participated in both defensive lineman and linebacker drills, as some project him more as an outside linebacker prospect.

"I think the biggest thing for me was to come out and show my ability to move in coverage and in space," he said. "And so I think I was able to definitely show I could do that today."

Ray's broad jump of 10 feet would have tied for fifth among defensive linemen at the combine, and his vertical of 33 inches would have tied for 11th. Ray did not bench press Thursday, but his 21 reps in Indianapolis put him out of the top 15 D-linemen.

The Bishop Miege (Roeland, Park, Kan.) High School graduate said he has put on 15 pounds since he started training for the draft, and he weighed in at 249 pounds, four pounds heavier than in Indianapolis. Ray named Jacksonville, Philadelphia and Pittsburgh as teams he has met with, and Steelers coach Mike Tomlin was in attendance.

Alongside Ray were two of his fellow starters from last season's defensive line, Markus Golden and Lucas Vincent.

Golden has been projected as a mid-round pick.

He improved his 40 time from 4.91 at the combine to a personal-record of 4.66 seconds, as unofficially reported by Missouri.

"I don't know what happened at that combine," said Golden, who also projects as a possible linebacker. "I don't run that (time I ran) at that combine. I had been running 4.6s all week."

Vincent, whose stock seems to be rising, said he has heard projections for him going on the third day of the draft or signing on as an undrafted free agent.

The tackle weighed in at 295 pounds. He set a personal best with a 9-foot-3 broad jump, bench pressed 23 repetitions and was clocked around the 4.9s in the 40-yard dash.

"A lot of the attention is on Markus and Shane," he said, "and I mean, I'm on the inside taking up all the double (teams), just trying to get a tackle in here and there."

At the Pro Day, however Vincent said it was nice to have his fellow linemen alongside him.

"It's a real comfort factor," said Vincent, who named the Rams and Titans as teams that spoke with him at length. "We all got really close. We're "D-LineZou.' We like to grind with each other. It's what we like to do."

Golden agreed, although he said his attention still had to be on himself.

"When you're doing stuff like that, man, you can't focus on somebody else," he said. "... Of course, if I'm seeing Shane, he asks me a question, "Hey, can I do something better?' Of course, I can tell him, "Oh yeah, I watched you, so do this better.' Same vice versa. If I ask him, "Shane did I do this right?' That's the thing about me and Shane, we help each other out so much."

Golden even had to use his focus to block out a family tradition. His father yelled out, "Rumble, young man! Rumble!" before nearly all of Golden's drills, as he has since Golden was a child. Normally, Golden responds will a war yell, but Thursday was all business.

"Because I was ignoring him today," he said with a laugh. "I had to stay focused on the drill. I'll say it for him later, though."

Offensive lineman Mitch Morse sat out of strength and agility drills Thursday, because he was happy with his numbers at the combine. His 36 bench-press reps were second-best among linemen in Indianapolis, his 9-foot-4 broad jump was tied for fourth, and his 4.50-second 20-yard shuttle was third. Morse said teams have discussed playing him as a guard or a center and his versatility will be key to raising his stock. He played multiple positions on Missouri's offensive line, mostly due to injuries. ... Tailback Marcus Murphy is hoping to catch on as a late-round pick by virtue of his kick-returning skills. Murphy, Missouri's all-time leader in return touchdowns, set a personal record with 14 bench-press reps, and said he improved all of his numbers.