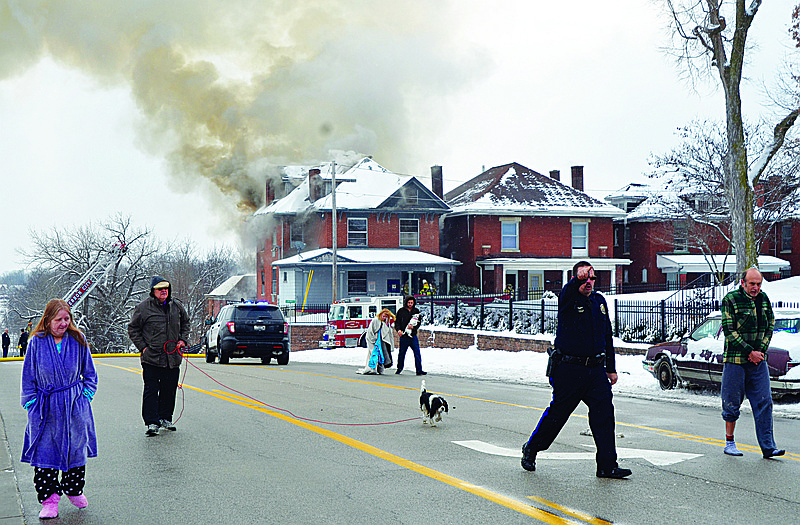 JCPD Officer Jeff Collins directs evacuated occupants and neighbors of a burning building at 201 Cherry St. to get to a warming vehicle Sunday morning while telling spectators to stay behind a police car in case of a gas explosion.

All nine occupants of the building got out without injury, and no firefighters were injured while battling the blaze, said Jason Turner, spokesman for the Jefferson City Fire Department (JCPD).

But the building was structurally unsound, and by late afternoon firefighters had not been able to get into it to check for pets whose owners didn't have time to get them out.

"We have three cats and another dog," said Teeka Brand, a tenant of a unit on the lower back side. "My husband told the firemen we have those pets and need to get them out."

The cause of the fire is still being investigated. Turner said firefighters still were talking to renters in the building.

The initial call for the fire came in about 10:20 a.m., and the first firefighters on the scene saw heavy fire showing from the rear of the three-story structure. They confirmed with tenants that all occupants of the apartment building were accounted for and uninjured.

One of the tenants escaped the structure with a dog in his hand, while others didn't have time to fully dress. One woman wore a robe and slippers while a man didn't have time to put on his shoes. JCPD officers guided them to a warming truck, where officers also asked them if they were OK and whether they had plans for temporary housing.

Meanwhile, JCPD officers - fearing that gas service hadn't yet been shut off to the building - yelled at a small group of onlookers to get back.

Gary Kern lives at 802 E. Capitol Ave. - the apartment building behind the structure on fire - and was forced to leave his apartment at a moment's notice. He said he heard a sound like someone was dragging a trash receptacle in the street, and then heard someone in his building yell, "Get downstairs! There's a fire!"

The conditions of the fire forced the JCPD to move to a defensive operation, using aerial devices and master streams on the structure's exterior. The building next to the structure, 203 Cherry St., suffered minor water damage.

The Red Cross was assisting the nine people who lived in the building with temporary housing.

Off-duty firefighters were called to provide coverage for the city while those on duty fought the fire.