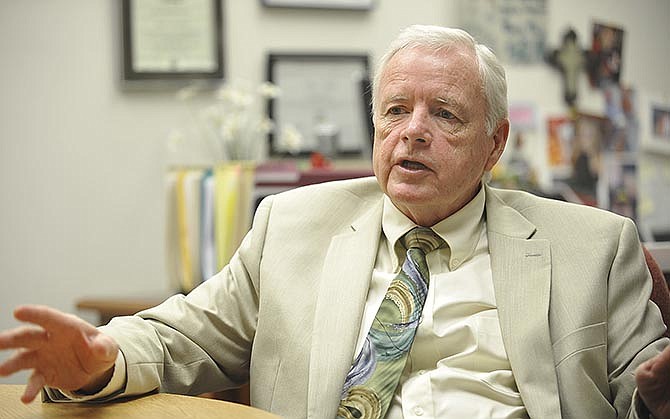 Keith Schafer talks about changes he's seen during his tenure at the Missouri Department of Mental Health.

Keith Schafer is leaving the Missouri Department of Mental Health for the second time - retiring this week after a combined 16 years as DMH director.

"I've been here a little beyond eight years (this time), and I think that's long enough," he said last week. "I've got a tremendous team of people - a senior management team that works very well - and I wanted to make sure that they transition and are able to continue what we've started."

The state Constitution requires the Mental Health Commission to hire the director, with the advice and consent of the state Senate.

"The one advantage of the Department of Mental Health is continuity," Schafer said. "It has a commission (which) is very passionate - it's primarily made up of people who have a stake in issues around mental health."

Schafer first headed the department in 1986 and worked with governors John Ashcroft and Mel Carnahan.

His second directorship began in 2007, with then-Gov. Matt Blunt.

"I think Gov. Nixon has a really good understanding of mental health issues," Schafer said. "He, frankly, has been the strongest governor I've worked under as it relates to mental health."

Schafer has been in and out of Missouri government since 1970.

He started with the Department of Elementary and Secondary Education, "working with "troubled kids' - back then, they didn't have all the fancy names and diagnoses" - until 1975, and then moved over to Social Services in the Division of Youth Services.

He was Social Service's deputy director under Barrett Toan in the second Bond administration, then left Missouri to head a national Child Welfare Leadership Foundation at the University of North Carolina.

Then, when his father became ill, he moved back to Missouri, applied for the Mental Health director's job and was hired.

"I had gotten somewhat familiar with Medicaid," he recalled. "One of the things that's changed dramatically since those days is Medicaid was not used as a funding stream for people with serious mental illness, people with alcohol and drug abuse problems (or) individuals with developmental disabilities.

"The commission was pretty far-sighted back in 1986 and had heard that other states were expanding their Medicaid programs."

Today, he said, around 70 percent of the department's funding comes through Medicaid.

After serving about eight years, Schafer left the department and state government and took a job in the private sector, working with health care companies headquartered in the East.

"You may remember that, at that point, the Department of Mental Health had gone through some really bad times, from a public point of view," he recalled. "There was a great deal of mistrust, that you might actually be hurt more by getting treatment at the department, than be helped.

"And I felt that was not true and I felt it was really important to chance public perception - and I thought I could help."

Schafer said one of the strengths of DMH is its advocacy programs.

He acknowledged, in 1986, many people said those with mental illness were at-fault for their troubles, just as they said alcoholics should control their own lives.

"Since that time, there's been tremendous advancements in knowledge about the brain disease portion of mental health," Schafer noted, "that it clearly is a brain disorder."

While there still is a stigma about mental health, he added, "the difference between 1986 and 2015 is like night and day.

"There has been much more media coverage (with) great films like "A Beautiful Mind' and others that have people understand schizophrenia or bipolar disease - and it's made a difference."

Part of the earlier public attitudes, Schafer suggested, could be linked to movies of the late 1930s-'50s, "when institutions were seen as very evil places. They started as sanctuaries, as places of respite, for people from a mad world around them and turned into "One Flew Over the Cuckoo's Nest.'

"(That) probably was inevitable, because people began to be warehoused, and institutions that should have served 500 were serving 2,000."

The United States in the 1960s - at President John Kennedy's urging, Schafer said - joined the international movement away from institutions and toward people living with or near their families in communities, and getting medical care and counseling through community mental health agencies that contract with the state department.

Still, he said, Missouri needs some institutional space, like the Fulton State Hospital that is being replaced with a $200 million, modern facility.

"We have forensic patients - people who committed crimes because they didn't get treated," he said. "They have to be locked up (where) they can be treated.

"I believe that everybody who is there, with the right kind of treatment and support - which could be expensive - can ultimately live in the community."

One of the biggest things we need to improve today, he said, is getting help to people more quickly - not just crisis services but reaching "out to young people during their first break in serious mental illness, and we would save untold misery."

"But, unless you have ongoing, care for a long time, it's not going to make a difference," he said. "We've designed a system to take care of people with acute, short-term problems.

"When you're dealing with people who have lifetime brain diseases, you must have ongoing services."

In his retirement, Schafer expects to continue consulting and some writing - he has self-published a couple of historical fiction books.

He doesn't expect to be remembered for things he, personally, accomplished.

"In the public sector, you have to work in teams," he explained. "It's not about any one, single person."

The people receiving treatment for their mental illnesses, Schafer said, "are far more courageous than I will ever be in my lifetime, to achieve what people would perceive as limited outcome or goals."