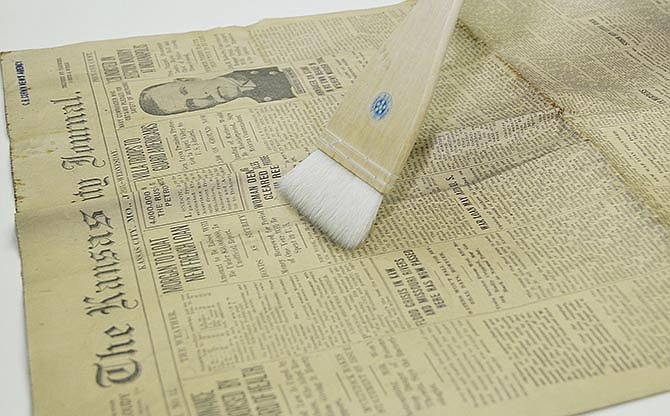 A natural fiber brush is used to gently wipe away impurities from a 100 year old newspaper found in the time capsule that was retrieved from the Missouri Capitol's cornerstone two weeks ago.

A ticket to the 1915 cornerstone-laying ceremonies, signed by some who attended.

A campaign flyer for J. Kelly Pool, secretary of the Capitol Commission board and candidate for what would be an unsuccessful race for secretary of state.

A teenager's (Pool's son, 16) message and autograph inside a couple of books.

"Those were "finds' - things we didn't expect to see" among the items inside and with the Missouri Capitol's cornerstone time capsule, Diane McKinney, a conservator at the State Archives, said last week. 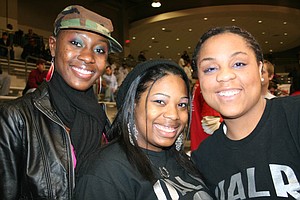 The time capsule was placed into the cornerstone on June 24, 1915, as Missouri government's home was being built - and was removed from the cornerstone earlier this month.

"(Things) were in pretty good shape, as far as time capsules go," McKinney said. "It's either the best or second-best one I've seen in the state so far."

The box was removed from the cornerstone on June 9, by going through the wall of a first-floor, mezzanine office, then opened at the climate-controlled State Public Health Lab on June 18.

The video and still pictures taken as the items were removed can be viewed at www.mo.gov/timecapsule.

After being removed from the copper box, the time capsule items were taken to the Archives, where conservators have been cleaning them with special brushes and dry sponges and adding a little moisture to some items - especially the newspapers, "to make them a bit more flexible, and to get rid of some of the excessive folds," McKinney said.

Many of the items will be shown in some kind of permanent display - probably in the Capitol Museum.

But those decisions still are being made.

"We're hoping to get guidance as to what - and how they want to display it - so that we can give them our input," McKinney said. "There are several different levels of treatment that we can do."

State Archivist John Dougan said, "I have to say, some of the most exciting things, for us, have to be the accidental discoveries - it's the campaign literature, it's the little note here that they've nailed to the board.

"Those kind of human interest stories are always interesting to us, as archivists, and probably for the public as well."

Dougan said the 1915 time capsule also had items he and other historians like.

"We have a couple of the ground-breaking photos - but we don't have anywhere near the number that are in this," he explained. "Those things are new elements of history that we did not have."

Even as Dougan and his staff are working on the items from the 1915 box, the state Office of Administration is making plans to fill a new box with items from today that will be opened in 2115.

Dougan said a time capsule is important because "it really documents the time."

Newspapers show the events of the day, while official manuals and reports "showed exactly what government was doing."

He likes the idea that Missourians were asked to suggest items to be placed in the new time capsule.

The list of things to be included in the 2015 version will be announced during ceremonies at 1 p.m. Friday, on the Capitol's South Lawn.

Although its contents will be announced during those ceremonies, which also will celebrate the 100th anniversary of the first time capsule, the 2015 time capsule will be filled and placed later.

McKinney said going through the contents of the 1915 copper box has been exciting.

"This is fun," she told the News Tribune last week. "They tried to capture the time period in one day, and put it in the time capsule for the future and then - hoping that we would be able to see it - I think that's fabulous."

She wishes the building's architects had placed their business cards in the box.

And she would have liked to see "a few more photographs."

Noting 500 people across the world watched the live-stream video of the time capsule's being opened, McKinney said it's interesting for many people, not just historians.