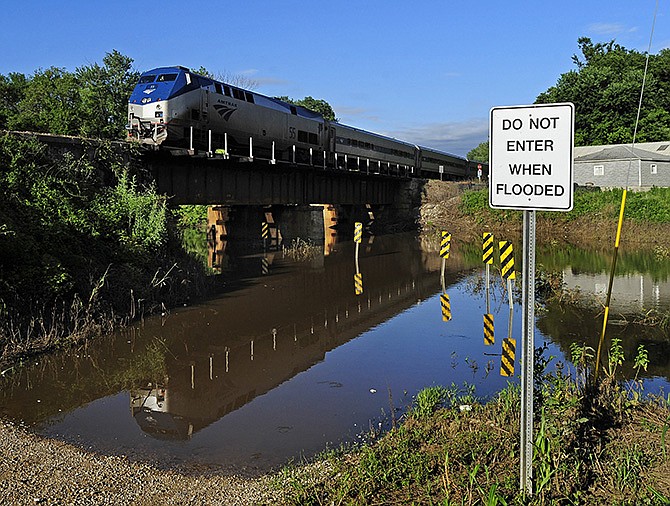 The Amtrak Missouri River Runner makes its way west toward Kansas City Friday as it crosses over the flooded Grays Creek at Cole Junction Road after departing from the Jefferson City depot.

Heavy rain continued in Mid-Missouri on Friday morning, and the National Weather Service in St. Louis forecasts the Missouri River will continue to rise through the weekend.

After heavy rain fell in the area Thursday night and Friday morning, Cole County and Jefferson City officials said most of the rain hit harder near Russellville and areas south of there, leading to minor flooding in the immediate area.

Cole County Emergency Management Director Bill Farr said most of the flooding was around Osage Bend and Osage City, noting areas near Russellville and south of there had up to 5 inches of rain and flash flooding issues.

"Those areas ... received quite a bit more rain than we did in Jeff City itself," Farr said. "It's already receding."

Jefferson City Public Works Director Matt Morasch said one area of Cole Junction Road was closed Friday due to flooding, but other than that specific location, city staff was simply on alert for any flash flooding in the area. Crews get prepared with emergency response vehicles, he said, and try to be ready in case any low-lying areas get flooded.

Morasch said they also use an alert system that helps let crews know what areas have been flooded. Morasch said though the next couple days look like they might be dry, crews will be on call if needed.

Farr said after Friday night, the hope is the rivers will begin to recede, but until then, crews are watching the levels.