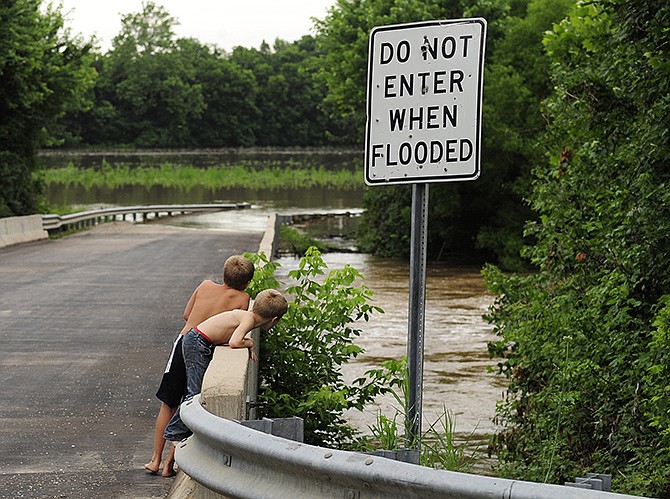 Brothers Kasten and Kelten Baur lean over for a closer look at the swollen Moreau River as it rushes under the Loesch Road bridge on Wednesday afternoon. Just a few feet north of the bridge, the river had already rendered parts of the road impassable and closed to through traffic.

As of 4 p.m., the Cole County Public Works Department announced that four roads had re-opened after being closed due to flooding earlier.

Roads still closed due to flooding include:

Continued heavy rains means rivers were still on the rise Wednesday in Central Missouri, leading to a number of roads being closed due to flooding.

To check on state road conditions across Mid-Missouri, check www.modot.org/central.

The recent heavy rains, coupled with the saturated ground, can create flash flooding, MoDOT officials said. A few inches of fast-moving water can carry a vehicle away. The rains can also wash out roads, leaving deep gaps as driving hazards.

The National Weather Service is calling for continued rain and thunderstorms through Friday with locally heavy rainfall possible.

As of Wednesday evening, the Missouri River in Jefferson City was at 27.43 feet, more 4 feet above flood stage. The forecast calls for the river to drop slightly to 25 feet by this afternoon and stay at that level until sometime Saturday when it is forecast to fall again.

The Moreau River near Jefferson City reached 21 feet Wednesday afternoon, 4 feet above flood stage, and was expected to reach 23 feet sometime this morning.

The Osage River near St. Thomas was nearly 17 feet Wednesday afternoon and expected to crest at 17.5 feet sometime Friday night.

Elsewhere, a 60-year-old eastern Missouri man died after his car was swept away by floodwaters.

The Missouri Highway Patrol identified the victim as John Lyons of Sullivan.

The accident happened Tuesday near Meramec State Park. Lyons was driving a 1992 Lexus when he tried to cross a flooded road. The waters pushed his car off the roadway and it overturned, killing Lyons.