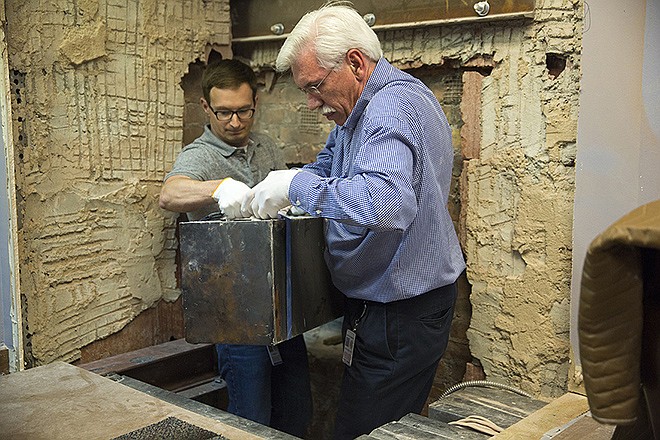 Project manager Bryan Chinn, left, and Charlie Brzuchalski, chief architect at Division of Facilities Management, Design and Construction for the state of Missouri, remove a 1915 time capsule Tuesday from a cornerstone in the Missouri State Capitol. After removal, the capsule was taken to the Missouri State Public Health Laboratory, a climate-controlled facility that will allow for a safe removal of the items inside.

State officials removed the copper box from the cornerstone Tuesday afternoon, and archivists plan to open it some time next week to see what condition its contents are in after a century.

"I'm interested in seeing if there are things in there that are not in current existence in archives or the State Historical Society (in Columbia)," Bob Priddy said after watching the 50 to 60-pound box being removed from inside the Capitol's walls.

The box was reached from inside a room in the building's southeast corner, after archivists and engineers determined that would be safer than trying to remove it from outside the building.

The bottom of the cornerstone is 7Â½ feet above the ground - but it actually was under the floor-level of the mezzanine offices added in the 1970s.

Priddy, a retired broadcaster and historian, has written a couple books about the Capitol's artwork and is working on another about its history.

Office of Administration spokeswoman Ryan Burns said the time capsule will be kept at the climate-controlled state health lab, with very limited access.

The archivists who will be there next week, when the box is opened, she said, "have the expertise and the plan of what needs to be done with the documents and the contents inside - where to store them as best as we can."

Eventually, Burns said, the contents of the 1915 time capsule will be put into "a display of some sort, here in the Capitol Museum, so that those objects can be seen by all the school children who come through, and people who are interested in Missouri history."

Records indicate its contents include copies of Jefferson City, St. Louis and Kansas City newspapers, a history of Missouri and a copy of the constitutional amendment authorizing construction of the new Capitol.

Those items will not be placed in the new time capsule.

Instead, the state is seeking suggestions for items to go into the new time capsule, with Missourians having until June 20 to submit their ideas.

The new time capsule's contents will be announced during a ceremony at 1 p.m. July 3, when the current box's contents also will be displayed.

Burns said the 1915 copper box won't be re-used as the new time capsule.

"We've ordered a new time capsule that is, hopefully, a little more high-tech than what they used in 1915," she said, "air-proof, waterproof - the inside cavity should be, hopefully, more protected from the elements than this one was."

The current Capitol was built after lightning hit the previous building's dome and sparked a fire that destroyed the older building on Feb. 5, 1911.

The 1915 cornerstone laying drew a large crowd for "a huge event," Priddy said.

He will join Gov. Jay Nixon, state Sen. Mike Kehoe, R-Jefferson City, and other officials on July 3, to celebrate the opening of the 1915 time capsule and to announce the items to be placed in a new time capsule, for people to look at in 2115.

Items now in the box "tell us where we were then, and now we know where we are now," Priddy said, so people can compare the two eras.

"The question becomes, 100 years from now when they do this again, what will we have in there that will tell them where we are socially, politically, economically and otherwise, in 2015."