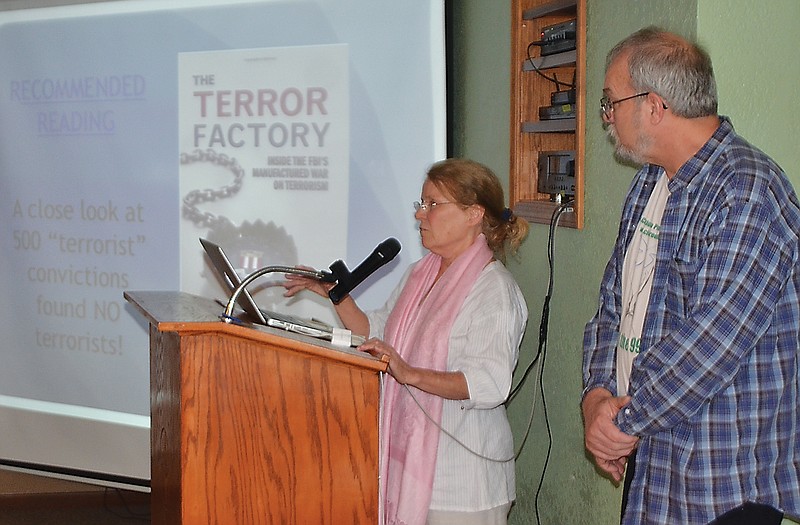 From left, Mel Underbakke and Fred Bryant, the director and co-director of Friends of Human Rights, give a presentation Sunday afternoon at Unitarian Universalist Fellowship on "Why We Should Fear Islamophobia."

The U.S. War on Terror has ruined the lives of many innocent people and led to a general decline in civil liberties, according to speakers at a Capital Area Interfaith Alliance event on Sunday.

The presentation on "Why We Should Fear Islamophobia" was given by Mel Underbakke, director of education of the National Coalition to Protect Civil Freedoms, and Fred Bryant, who co-directs Friends of Human Rights with Underbakke.

The pair of presenters focused on several specific cases in which they said American Muslims were wrongly accused of terrorism. In one case, the government charged Sami Al-Arian, a tenured professor at the University of Florida, with terrorism.

They showed a short documentary detailing how he was denied his right to a speedy trial, his right to an attorney and was put in isolation for 23 hours a day, and sometimes 24 hours a day for weeks.

The government spent about $50 million prosecuting him, they said.

They said despite the fact he was found not guilty on all major counts, the Justice Department still held him for another three years on the threat of retrial on the few charges that resulted in a hung jury. Then, they put him on house arrest for another five years.

Underbakke and Bryant said that with the National Defense Authorization of 2012, anyone can be held under arrest indefinitely without being charged, and use "secret evidence" against them, which doesn't need to be revealed as exculpatory evidence in court.

They detailed some of the effects this has had on the families of innocent people who have been imprisoned.

"A lot of people have been affected by this, not just the people put in prison," Underbakke said.

Five hundred of these cases are detailed in the book "The Terror Factory: Inside the FBI's Manufactured War on Terrorism."

Bryant said many of the people held or prosecuted by the government were Muslims who were leaders in their communities.

He speculated the government did this to silence potential opposition leading up to the war in Iraq.

They said the National Coalition to Protect Civil Freedoms survives on donations. The money is used to help the prisoners, their families and to educate the public.

"We need more people, if you'd like to join us," Underbakke said.