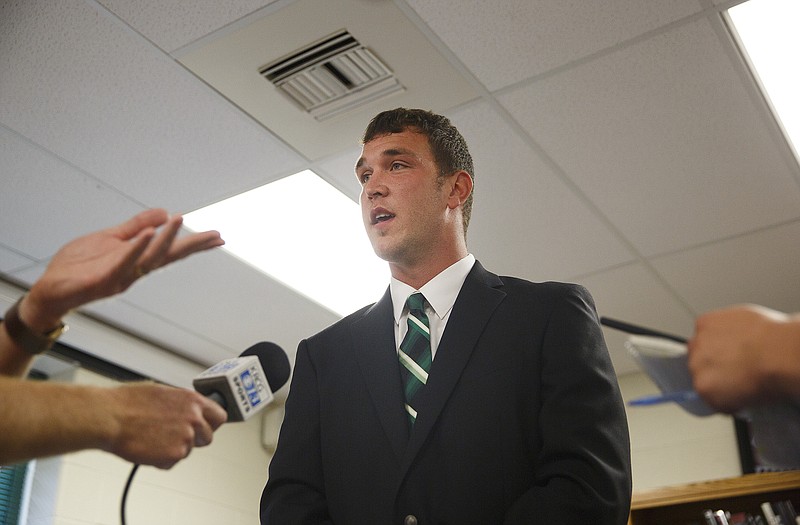 Travis Henke talks with the media Thursday after being introduced as the new head baseball coach at Blair Oaks in Wardsville.

WARDSVILLE, Mo. - As a player, Travis Henke won a combined four state titles with the Blair Oaks Falcons. Now that his playing days have ended, he'll try to add to that total in a different role.

"During the interview process, the gentleman standing next to me repeatedly made reference to his years as a student and athlete at Blair Oaks," Blair Oaks superintendent Jim Jones said while introducing Henke. "He emphasized that the pride he felt as a Falcon then and now will endure forever. He indeed bleeds green and white."

After graduating from Blair Oaks in 2007, Henke - who won two of his titles in baseball ("06, "07) and two in football ("04, "06) - played baseball at Jefferson College in Hillsboro and the University of Arkansas at Little Rock. He spent his last four years playing Class A minor-league ball in the Washington Nationals' organization, most recently with the Potomac Nationals.

Henke said returning to Wardsville was always "in the back of (his) mind."

Henke, 27, was released by Potomac in January. He also played for Nationals Class A affiliates the Auburn Doubledays and Hagerstown Suns. He said his experience in the minors will prove valuable as a coach.

"I played for a bunch of great coaches through the collegiate level and the professional level," Henke said. "They have taught me the new techniques of coaching. The different drills you can do. The different ways of coaching. Base-running. Fundamentals that I've learned throughout the last five years. I don't think you can learn it just by ... working a job that doesn't deal with baseball.

"... It's a dream come true for all young men. I wish every young man could experience what I experienced with the guys you meet, the places you get to see and all the ballparks you get to see. It's interesting to see how many different communities are interested in baseball just like we are."

Henke said his love of the sport has always made coaching an appealing option.

Baseball runs in Henke's family. His uncle, fellow Blair Oaks graduate Tom Henke, was a two-time All-Star in the Major Leagues who pitched for the Rangers, Blue Jays and Cardinals.

"He's always on speed dial, let's say that," Travis Henke said. "He's more than welcome to come back, but he also has given me permission to say he would come back and help - not as a coach, but just in an honorary coach, I guess - come back and share his expertise."

Travis Henke will not teach at Blair Oaks. He has been working for two months at Ecowater, helping with deliveries among other duties.

He said he has been around practice and attended a few games in the spring, and he is excited to get to work with the Falcons.

"You can just kind of tell that they're excited for something new to happen and a guy that has played ball for a while," he said. "I think they know they can learn quite a bit from me."

"Always the goal is to be in the state championship game," Travis Henke said. "That's always a goal. It is about winning, but it's also getting these young men moved on to college and play at the next level."