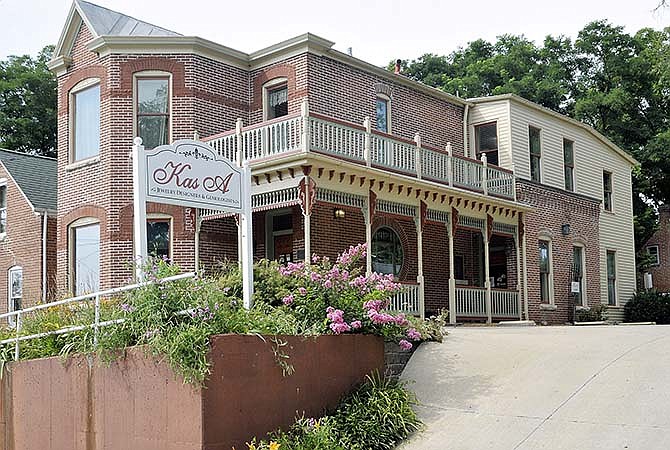 When the Schwartzott family built the East Lake-style home atop a steep Jefferson City bluff on the south side of Wears Creek in the 1870s, Dunklin Street ended on the same level as its front door.

Today, 308 W. Dunklin St., is more than a story above the main thoroughfare in Old Munichburg and houses Kas A Designs.

The city Landmark, named in 2005, also was honored by Instore Magazine in 2011 as one of the coolest store locations in the country. The article noted that the two Victorian homes where the jewelry store is located offered a "fashionable yet relaxed aesthetic."

The city street became a through street in the 1920s, when the bluff was graded to its present elevation and permitted the owners to construct bunker garages.

"It's German, well-built," she said. "Even with the years of neglect, they could be brought back."

Jacquot returned the front porch in 2001, based on the East Lake style and following the "ghost outlines" showing the height and placement. The red brick structure also exhibits Victorian and Queen Anne influences.

A carriage house, which originally belonged to the Schwartzott family's original home, still stands in the alley on another lot.

The home was built for Mr. Schwartzott's daughter and her husband, who died a few years later, Jacquot said.

"It was the only building there in the 1870s," making it the oldest house in that section of town, she said.

Before the Schwartzott family built on the unique location, the Union army had noticed its vantage point during the Civil War for an encampment, Jacquot said.

Preserving and showing pride in the local history has been mutually beneficial for Jacquot's business and the local neighborhood.

The industry magazine added: "The beautiful brick and wood on the exterior of this store helps create an old-fashioned kind of shopping experience before the customer even enters the store."