Alden says it's "a perfect time' to step down as Missouri A.D. 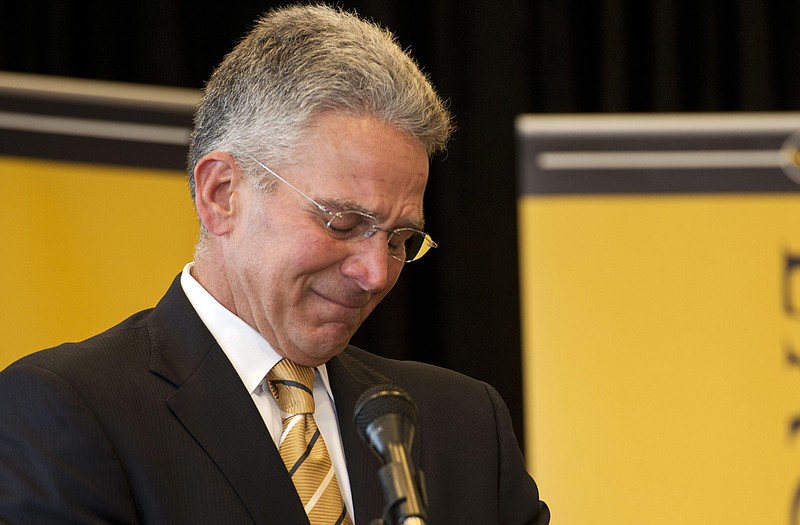 COLUMBIA, Mo. - On July 1, 1998, Mike Alden was shirtless atop a building on his family's farm in Williamsburg. As his father, cigarrette in one hand and Bud Light in the other, directed from below on how to attach rafters to the ridgepole, Alden's wife, Rockie, told him he had a phone call.

On the line was from Richard Wallace, then-chancellor of the University of Missouri, who met with Alden three days later at Gasper's Truck Stop in Kingdom City before ultimately naming him the school's newest director of athletics.

Friday morning, Alden, wearing a black suit and striped gold tie, stepped to the podium of Reynolds Alumni Center to discuss his resignation from that position nearly 17 years later.

"Dr. Wallace and I had that breakfast all those years ago," Alden said. "And I will be forever indebted to him for the opportunities that he and the University of Missouri have provided me."

During Alden's time at Missouri, which will end Aug. 31, Missouri saw its athletic profile rise nationally, as the football team reached unprecedented heights under coach Gary Pinkel and the Tigers moved from the Big 12 to the Southeastern Conference.

Alden said he felt now was the right time to step down because it was time to give someone else a shot at the job and because he could give more to the university in a smaller role. Alden plans to work as an instructor with the Missouri College of Education and with the school's Positive Coaching Program.

"This is a perfect time," Alden said. "We love the University of Missouri. We love the state of Missouri. Our family has been so blessed by this institution. If you'd think about the things that are going on in our community and the amazing opportunities that are out there in front of our university, in front of our athletic program - if you truly want to be selfless, if you truly want to be a servant leader, if you truly want to let other people be the drum major and you truly believe that in your core, then you want to take that baton and hand it to someone else, and that's what we want to do. That was our choice."

Alden said it was necessary to announce his resignation seven months in advance because February through May is the key time for recruiting athletic directors.

The search for Alden's replacement will be held by chancellor R. Bowen Loftin. Loftin, who took over at Missouri nearly a year ago, said Alden's reputation made leaving Texas A&M for Missouri an easier decision.

"His long-term service here at Mizzou is exceptional and it has been impactful," Loftin said. "Those who've been here during that time know personally how this place was then when he arrived and how it is today. This man has transformed athletics at the University of Missouri by any measure."

Loftin, who has not yet decided if he will hire a search firm, said he does not expect the hiring process to be a drawn-out one. His most recent search for an athletic director took six weeks, he said.

Football coach Gary Pinkel and basketball coach Kim Anderson were in attendance for the press conference. Pinkel, who has been in his current position since 2001, has been Alden's most successful hire, winning more games than any other Missouri football coach and leading his team to five division titles since 2007. Pinkel credited Alden for his patience in letting him establish a program.

"That's the only reason I came here, because I felt like I had to do that," Pinkel said. "Because what they did before, is they just fired everybody (every) four or five years. If you do that, then you inherit what I inherited, which is a lot of problems. Mike stuck with me, and that's one of the things I talked to him about when I accepted the job. I said, "I need somebody that when things get tough, I need somebody to stand next to me and give me and opportunity to build a program.' And that did happen. It happened a couple times in his first five years, so I'll be indebted to him forever.

"Without that strength and that leadership, guess what? They'd still be flipping coaches here and the program wouldn't be near what it's like."

Anderson, on the other hand, was introduced as Missouri's latest basketball coach just nine months ago in the same room of the Reynolds Alumni Center.

"(Aldon's) done some tremendous things at this university in 17 years," Anderson said. "I was here when he got here, and I'm here when left, and I wasn't here much in between, but if you look around this university and the athletic department, he's done a lot of great things."

Not all the happenings under Alden were positive. The Missouri athletic department had a particularly tumultuous year in 2014. A March report by ESPN's Outside the Lines accused the department of mishandling the events surrounding the sexual assault of swimmer Sasha Menu Courey, who died by suicide in 2011.

The event was the latest in a string of issues related to sexual assault for the program. Michael Dixon left the basketball team in late 2012 after being accused twice of sexual assault, and in 2010 running back Derrick Washington was kicked off the team after being charged with felony deviate sexual assault. Additional allegations regarding Washington were reported by Outside the Lines in August 2014.

In April 2014, the football team dismissed star receiver Dorial Green-Beckham after he was investigated for a suspected burglary.

Loftin said, to his knowledge, Alden was not stepping down because of issues related to Title IX.

Alden was asked if he had any regrets from his tenure.

"If you think over the course of 17 years, almost two decades, there's always things that you're going to look back on and recognize that either you had mistakes or you could've done things better or you had some stumbles," he said.

"But I think as you look at that, in these types of jobs, there are always going to be those types of maybe issues or crisis-type of management for us. You're regretful that things happen, that they happen, but what you hope is if they happen - and you know inevitably something is going to happen - how you're going to approach that and learn from it and go forward. I think those are the things that I really choose to focus on."