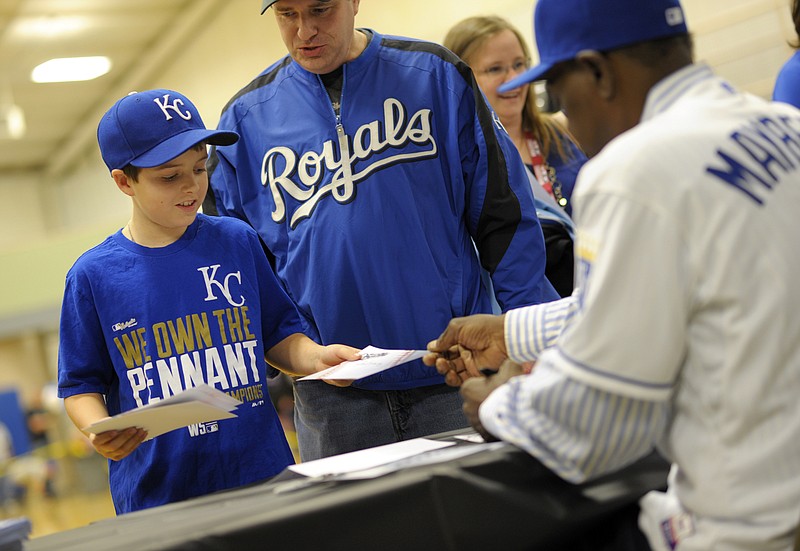 The Royals Caravan was running behind schedule Wednesday, but after a 29-year wait, what's 23 minutes?

The blue-and-white-clad fans who had waited in line for their team to arrive cheered when Christian ColÃ³n and Louis Coleman entered the Firley YMCA gymnasium. It didn't hurt that following the shortstop and relief pitcher were Royals Hall of Famer John Mayberry, announcer Steve Physioc and, oh yeah, the American League Championship Series trophy.

After 29 years of playoff-less baseball, the 2014 Royals won a dramatic Wild Card game and swept the divisional and championship rounds before falling one win short of a World Series. For many fans, it was worth the wait.

"I worked in Kansas City, and I transferred down here," Mike Hobbs of Centertown said. "I got a lot of flack for being a Royals fan. It's taken 15 years to say, "We're better this year.'"

For fans whose blue apparel has been outnumbered by red in recent years, now is their time to shine.

"They keep saying (it's) Cardinal country," Coleman said, "but a lot of Royals fans are showing up. It's good for us, and we're excited."

ColÃ³n is excited to be a part of the Royals renaissance.

"I'm actually kind of happy to see a lot more blue than red," he said. "And we'll slowly take over."

This Caravan is ColÃ³n's first.

"I didn't realize how big of a fanbase outside of Kansas City the Royals have," he said. "And obviously it has to do too with being in the World Series and everything. I mean, it's just great. Coming out here and seeing everybody, little kids and families. For my first experience, this is unreal. I love doing this."

The ALCS trophy, officially named the William Harrdige Trophy, was brought out by Dave Webster - or as Royals fans know him, "KayCee." The mustachoied Royals historian who dons a retro 1800s-era uniform hangs a W on the Royals Hall of Fame building after each win. It was an idea he thought of last winter, and the Royals' ALCS-winning year was the inaugural season for the tradition.

"It was perfect timing," Webster said.

KayCee's three favorite appearances were the game when Korean superfan SungWoo Lee lent him a hand, the Wild Card-clinching defeat of the White Sox for which Webster traveled to Chicago and, naturally, the ALCS win that sent the Royals to the World Series.

"That was the greatest feeling in the world," said Webster, who was a Royals season-ticket holder before he worked in the team hall of fame. "After I put the W up, I got to get on the field and do the victory lap with the team, which was, for a guy like me, just a regular guy to do that was just amazing. It was just so much fun.

"Hopefully we'll do it next year, but you never know. It was 29 years since the last time, but it was great. You can't explain just the excitement of being there."

If the Royals want to repeat their success in 2015, they'll have to do so without a few familiar faces. Starting pitcher James Shields departed for free agency, and designated hitter Billy Butner now wears an Oakland A's uniform.

"Those guys were a huge part of what happened last year," ColÃ³n said. "They did their time here, and they decided to go somewhere else, and it's just how it goes, the business. Hopefully, with the new guys that we have, we can have the same chemistry, and you build up from there and have a good season."

ColÃ³n hopes to see some more time at shortstop, as does the caravan attendee who called out, "Christian, they need to let you play more!" ColÃ³n appeared in 21 games in 2014.

As for Coleman, he is a part of a bullpen that is hoping its lights-out success in the playoffs carries over. The Mississippi native struck out 24 batters in 34 innings last season.

"The guys in the bullpen, we're pretty relentless at what we do," said Coleman, who had been on one Royals Caravan before. "I don't think it will be a problem, and I think they'll go out there and do exactly what they do. There's a handful of us that it's our job to get it to the three in the back-end."

That big three of Kelvin Herrera, Wade Davis and Greg Holland was a big reason for the Royals' postseason success, and the big 11 wins Kansas City compiled in the playoffs were a big reason fans like Kevin and Ronda Higgins were happy to come out and show their support Wednesday.

"I worked last night, and I have to work tonight, and I got up purposely just to come to this," said Ronda Higgins, a Jefferson City resident. "Not a lot of Royals fans in Mid-Missouri, so we're happy to come out and (represent) true blue Royals fans."

Ronda Higgins was happy to see all of the players on the caravan, which also has tours covering Kansas, Iowa, Nebraska and other parts of Missouri. Kevin Higgins was most excited to see Mayberry. The fact that the Mid-Missouri/Arkansas leg got to bring along the ALCS trophy was nice, too.