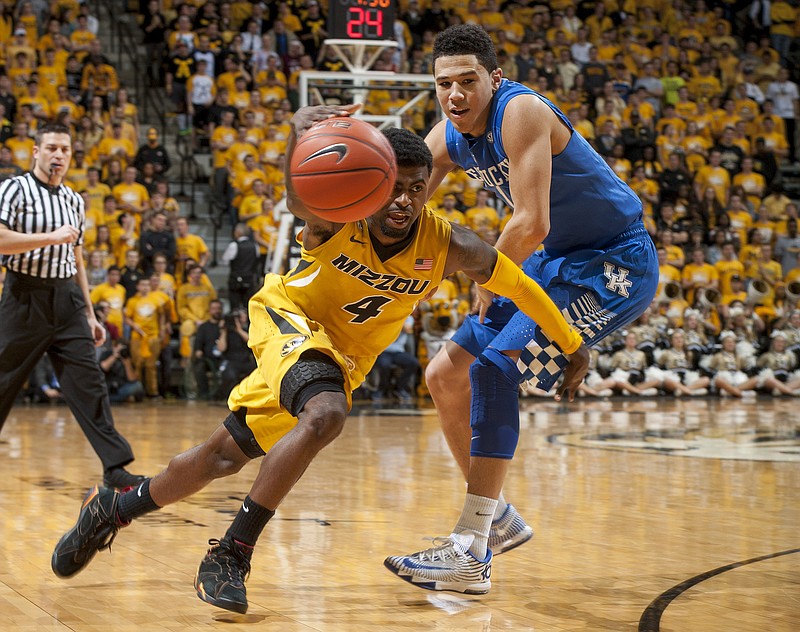 COLUMBIA, Mo. - Missouri coach Kim Anderson said his team would have to play a perfect game to defeat top-ranked Kentucky, which beat the Tigers 86-37 just 16 days earlier. It wasn't a 49-point blowout, but it wasn't perfect either, as the undefeated Wildcats rolled to a 69-53 win Thursday against Missouri at Mizzou Arena.

"We obviously don't play Kentucky very well," Anderson said. "I thought we battled. I thought we fought. We just couldn't handle their size. They did a great job of getting the ball inside, and we fouled way too much."

Missouri committed a season-high 31 personal fouls, 21 in the second half. Seven Tigers had three or more fouls and three fouled out.

The loss was Missouri's sixth straight, all in conference play.

Kentucky began the game by scoring the first six points and keeping Missouri off the scoreboard until 3:39 had passed.

Missouri pulled within one point when freshman point guard Tramaine Isabell found senior Keanau Post along the baseline for a dunk, capping a 7-2 run. On the other end, Post delivered a vicious block on Kentucky freshman Devin Booker, who was going up for a monster one-handed dunk.

Booker, whose dad Melvin was a star at Missouri, drew boos each time he touched the ball, but answered with two points on his first shot of the game. He finished with nine points and four turnovers, and Kentucky coach John Calipari said he struggled in the environment.

"He's 18 years old, he's one of the youngest kids in college basketball, and he's coming to Missouri where his dad played, and he's getting booed. I mean, what do you expect? I should've expected that more," Calipari said.

Missouri faced a second early drought after Post's dunk, failing to score for nearly four minutes until sophomore guard Wes Clark hit back-to-back 3-pointers to give Missouri its first lead of the day at 13-12.

In Saturday's 61-60 loss to Arkansas, Clark missed two free throws with 3.3 seconds remaining to cost Missouri a shot at its second Southeastern Conference win. Clark's teammates expressed support for him afterward and said he had responded to the disappointment well. He finished the game with a team-high 19 points, shooting 3-of-7 from 3-point range.

"I wasn't near as worried about Wes as everyone else was," Anderson said.

The teams traded leads five more times before Kentucky distanced itself with an 8-0 run. Bookending that run were two dunks from Ryan Rosburg, who had played an average of just over four minutes in Missouri's last seven games. Rosburg's six first-half points doubled his output in SEC play entering the game.

"I had to be ready," Rosburg said. "I hadn't been playing much, and I knew I would get a chance sometime and luckily I made the most of it tonight."

Calipari said he wasn't surprised to see Missouri come out and play the Wildcats physically.

"Missouri had Arkansas beat, beat LSU and they came after us, and they were not afraid," he said.

The Tigers had turned the ball over just eight times total against press-happy Arkansas the game before.

Missouri came out of halftime with a 5-2 surge but the fouls began piling up and the Tigers couldn't gain any traction. Post picked up his third personal foul of the game just 24 seconds into the half and headed to the bench to be replaced by Rosburg.

Unlike in the first half, Missouri struggled to find baskets inside through the pick and roll.

"The first half, we were getting a little pocket pass, and we worked on that with our big guys," Anderson said. "Ryan did a good job of converting. And in the second half, they did a better job."

Clark added: "They're just so long and big. Those gaps that were open just weren't open in the second half."

The Tigers drew eight more fouls in the next seven minutes, including a double-technical on Johnathan Williams III and Kentucky's Marcus Lee. During that stretch, Post picked up his fourth foul, as did both Montaque Gill-Caesar and Namon Wright, who played just a combined 18 minutes to do so.

Missouri went more than seven minutes without a field goal and lost Post, Wright and Gill-Caesar to their fifth fouls before Clark finally hit a jumper to end an 18-4 Kentucky run.

A Clark 3-pointer brought Missouri within 60-46 and brought the Mizzou Arena crowd to its feet, but 14 points was as close as the Tigers would get the rest of the game.

Coming into the game, Anderson thought the Tigers would benefit from having Gill-Caesar, who missed the last meeting between the teams with a back injury. Instead, the freshman had four turnovers, no points and five fouls in nine minutes on the court.

Andrew Harrison led the 10 Wildcats who scored with 15 points. Kentucky had 23 personal fouls of its own and Karl-Anthony Towns and Lee fouled out.

Missouri returns to Mizzou Arena on Saturday against Mississippi.