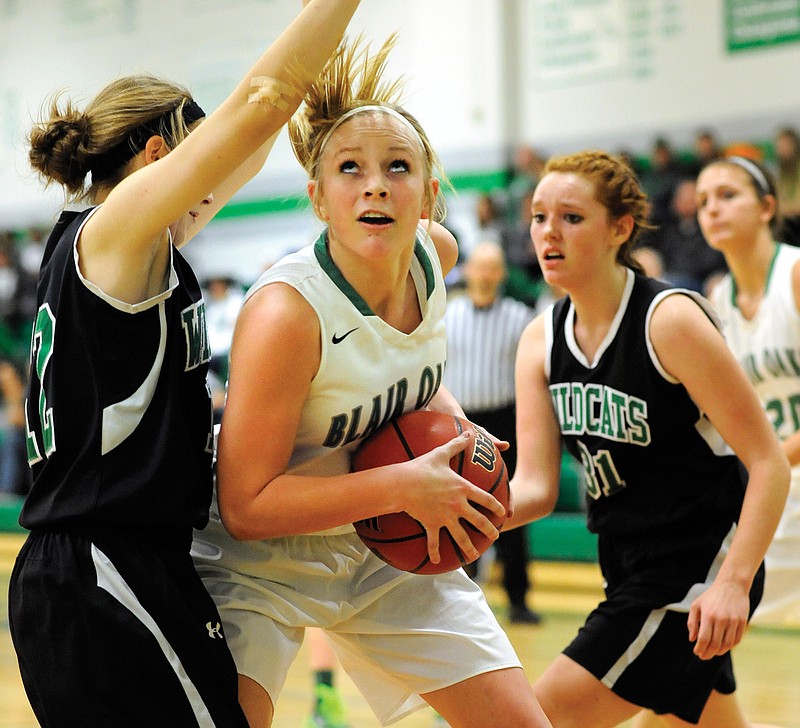 WARDSVILLE - There's no running clock in the first half of high school basketball games, but if there were, Blair Oaks would have forced one.

Every player on the Lady Falcons' roster scored at least a point, the home team reached a 30-point lead midway through the second quarter, and Blair Oaks blew out Warsaw on Friday night, 72-23.

A game after losing a second-half lead to Centralia in a disappointing loss, the Lady Falcons shot 52.6 percent from the field and never left a doubt as to whether they would answer with a win or loss.

"It's good to see they responded, came back," Blair Oaks coach Leroy Bernskoetter said. "(It was) a game that we needed to have to get that sour taste out of our mouth. And I hope that it's a game that helps build their confidence going on."

The Lady Falcons jumped out to a 29-8 lead in the first quarter, scoring two buckets and forcing two turnovers in the first 30 seconds. The Lady Wildcats turned the ball over 23 times in the first half and made just three field goals.

Kellie Fredendall helped Blair Oaks get off to its scorching start by sinking all five of her field-goal attempts in the first quarter. The inside presence was a welcome one for Bernskoetter, especially because Blair Oaks forwards combined for just two points against Centralia.

"That's a plus, because then you look at our bench, what we had, and there's a lot of firepower to come off the bench," he said.

Bernskoetter shook up the lineup, giving the start to freshman Sydney Wilde. The move seemed to shake up the whole lineup, and the Lady Falcons' bench scored 24 points on the night.

Having multiple players vying for time will build a competitive spirit, Bernskoetter hopes.

"If you've got a good attitude and come out there and play hard, that's what we want, and we'll build from that," he said. "No more pouting and feeling sorry and all this kind of stuff. We've got to have five girls go out there and compete, and I thought tonight we did a pretty good job of that."

Seniors Lauren Viessman and Chelsi Emerson led Blair Oaks with 20 and 14 points, respectively. Viessman shot 80 percent from the field and 50 percent from behind the arc. Emersen racked up all but one of her points in the first half and shot 71 percent overall.

Sarah Wolken scored eight points off the bench and pulled down seven boards.

"She's one that just fits in good with other good players," Bernskoetter said. "She's not going to be the No. 1, ball-handling and has to do all that kind of stuff, but she's one that can score. I joke with her. I call her Jamaal "Silk' Wilkes, because she's got a nice shot."

Blair Oaks led 47-10 at the half and 61-20 entering the fourth quarter. The Lady Falcon's final cushion of 49 was the largest lead of the game.