Fresh off victory, Missouri hoops off to Georgia 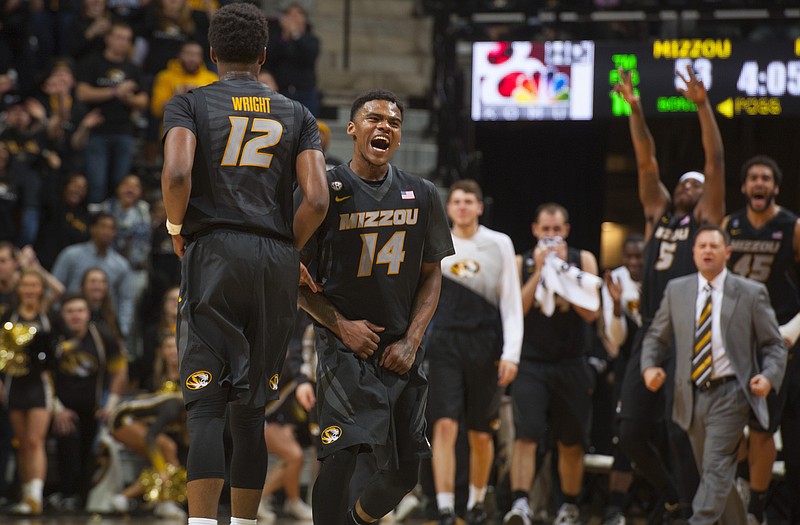 Missouri teammates Namon Wright (12) and Keith Shamburger celebrate during the second half of Tuesday night's win against Florida at Mizzou Arena.

COLUMBIA, Mo. - The Missouri men's basketball team was a little unsure of what to do with itself after ending its 13-game losing streak Tuesday against Florida.

"It was kind of weird, because we hadn't felt a win in a long time, so we didn't really know what to do," sophomore Johnathan Williams III said.

So what did he do?

The Tigers hope to earn a few more grins in their three remaining regular season games, the first of which is today at Georgia (11 a.m., ESPNU).

"I don't want to just say, "Well, we won this game. That's good,'" first-year Missouri coach Kim Anderson said. "Let's go ahead and finish off. Let's see if we can win another game."

Today's test will be a tough one. Georgia (18-9, 9-6 Southeastern Conference) is projected by many to be an eighth, ninth or 10th seed in the upcoming NCAA Tournament.

Point guard Charles Mann averages 3.6 assists per game and has attempted 187 free throws this season, most in the Southeastern Conference. The Tigers have struggled to keep opposing guards from driving to the rim this season.

"We'll have our hands full guarding him," Anderson said of Mann.

The Bulldogs average 27 defensive rebounds per game, ninth most in the country. Comparatively, the Tigers rank 247th nationally.

The Georgia defense will likely keep a close eye on Missouri freshman Namon Wright. Wright is coming off a 28-point, 10-of-13 shooting night against Florida.

"Now that they've seen that I can shoot real well, I think Georgia will guard me a little more tough," he said.

Wright said it has been a relief to end the losing streak, which spanned 47 days.

"We're more confident," he said. "We're probably going to be a little more loose in practice also, but we still want to just play our hardest and just finish the season as strong as we can."

Not that Anderson is worried about his team getting too high after Tuesday's win.

"I don't think that'll be a problem," he said with a laugh. "It's not like this put us in the NCAA tournament or something."

The Tigers' inspiration for finishing well is to work toward the future, but they could still fight their way out of their last-place seeding in the upcoming SEC Tournament.

Missouri could theoretically pass Auburn, South Carolina or Mississippi State if enough stars aligned. The bottom four seeds in the conference compete in the first round of the tournament, with No. 12 playing No. 13 and No. 11 playing No. 14. The winners go on to play the fifth and sixth seeds, respectively.

"I don't even know what the math is," Anderson said. "But just maybe we can build on something for the future."

Missouri freshman Jakeenan Gant doesn't need any extra motivation to have a good game today. Gant is from Springfield, Ga., a 3 1/2-hour drive from Athens, Ga., where the Bulldogs are located. He said he won't feel pressure playing close to home.