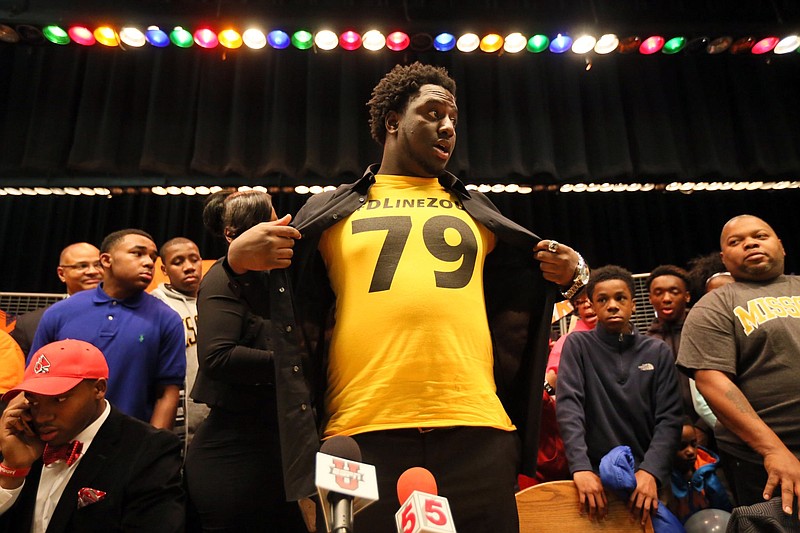 "I wasn't staring at a TV," Pinkel said. "I was just working on something else and expected to hear yells or expected to not hear anything at all."

Luckily for Pinkel, he heard yells. When Beckner, a 6-foot-4 300-pounder, raised a Missouri pennant to signal his choice, he became the final, and most-coveted, player to join the Tigers' 2015 recruiting class on National Signing Day.

Missouri cornerbacks coach Cornell Ford, the Tigers' primary recruiter of the St. Louis area, was watching as Beckner made his tear-filled, taciturn announcement on ESPNU. Ford, Pinkel and Missouri defensive line coach Craig Kuligowski said they did not know whether Beckner would be choosing Missouri over Auburn, Ohio State or Florida State.

"I'll say this about him, that face that you saw up on the screen, he's pretty much like that most of the time," Ford said. "He's a man of few words. There are few things where you can get him to talk a little bit, but on this topic, he really didn't say a whole lot."

ESPN lists Beckner as a five-star recruit, the highest grade possible. He is the first such player since wide receiver Dorial Green-Beckham in 2012 to sign with the Tigers.

Though Beckner will likely be an interior defensive linemen for the Tigers, who return starters Harold Brantley and Josh Augusta at defensive tackle, there's a good chance he could contribute as a freshman.

"If he comes in and practices real hard, yes," Kuligowski said.

On the offensive end, the Tigers picked up the highest-ranked prospect in Missouri, quarterback Drew Lock from Lee's Summit. Lock, a third-generation Tiger who was also recruited in basketball, will have the opportunity to take the reins from current Missouri quarterback Maty Mauk, who will be entering his junior year next season.

"He's got the quick release," Missouri offensive coordinator Josh Henson said of Lock. "He's got a great arm. He spins it really well. It comes off of his hand really well, but he's a good athlete, too. ... I know that he loves football, that he's a gym rat-type guy, and he's going to really get into it and learn and try to know everything he possibly can know about playing the game. So from that standpoint of it, I feel really good about him. I think he's a guy in the future that will obviously have a great opportunity to do some really great things at Mizzou."

Eight recruits came from in-state, while Kansas, Tennessee and Georgia each produced three recruits. The 2015 class does not have any Texas players, likely a result of the program's shift to the Southeastern Conference. Missouri has had a Texas recruit every year since at least 2002, and this season will be Missouri's first without a Texas school on the schedule since 1984.

While the Tigers look to be loaded at the interior D-line positions, Missouri lost what Kuligowski called "the two best defensive ends that we've had in tandem at the University of Missouri" in Markus Golden and Shane Ray from the 2014-15 team.

Competing for playing time will be Marcell Frazier, a junior college recruit from College of the Siskiyous. Kuligowski said Frazier was the best junior college player the Missouri staff saw tape on, and ESPN ranks him as the fourth-best defensive end prospect. The Tigers also brought in defensive end Nate Howard, a St. Louis-area recruit who flipped late from Wisconsin and Josh Moore, a tight end recruit who switched from Kansas to Missouri and is expected to play on the defensive line.

The Tigers' most glaring need entering the 2015 season is at wide receiver. Missouri's offensive production was down at that position in 2014, and most of the catches came from seniors Bud Sasser, Jimmie Hunt and Darius White. The team's returning wide receivers have caught just 10 career passes.

Missouri brought in three receivers. Justin Smith will give Missouri some size with his 6-foot-7, 200-pound frame. Richaud Floyd and Emmanuel Hall will provide some speed options.

Johnathon Johnson is listed as an "athlete" but will likely play receiver, and Ronnell Perkins will either play receiver or defensive back.

Missouri almost lost Kuligowski to Illinois this offseason when he was offered a co-defensive coordinator position. Kuligowski said he did not want to discuss how close he was to heading east, and when asked why he chose to stay, his answer was brief.

Kuligowski's departure might have thrown a wrench in Missouri's recruiting of Beckner, though the defensive lineman said it wasn't a big factor in his decision.

That's not to say there weren't some worries about whether the Tigers would nab Beckner while Kuligowski's future was in limbo.

"I was concerned," Ford said. "I don't know about Terry, but I was concerned. I know "coach Kool' did such a great job, and anytime a major factor in what you do leaves - and I was concerned but happy for Kool with the opportunity - but anytime something like that happens at this particular point in the recruiting process, it can be a factor."