Illinois holds off Missouri for 68-63 victory 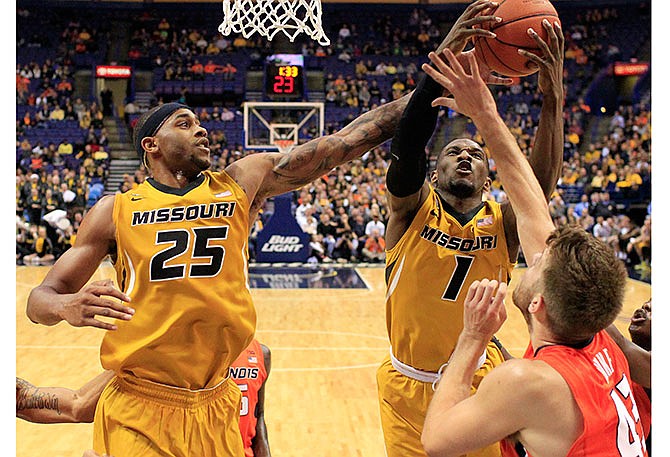 Missouri's Russell Woods (25) and Terrence Phillips (1) reach for a rebound in front of Illinois' Michael Finke, right, during the first half of an NCAA college basketball game Wednesday, Dec. 23, 2015, in St. Louis.

ST. LOUIS - When Illinois guard Kendrick Nunn slammed an emphatic dunk in the first half of the Braggin' Rights game Wednesday at Scottrade Center, Missouri junior Wes Clark immediately demanded the ball. In eight seconds, he dribbled down the court and sunk an impatient mid-range jumper to silence the still-standing Illinois crowd.

The next points, less than a minute later, came on an even more emphatic dunk by Nunn.

It was the story of the night for the Tigers. Clark led a comeback charge, scoring a career-high 21 points, but it was all in vain for Missouri. The Tigers cut a 20-point Fighting Illini lead to three but fell 68-63, extending their losing streaks to three in both the current season and Braggin' Rights contests.

"I feel like everyone got like an extra push because of how Wes played," junior forward Russell Woods said, "and Wes just was telling us, like, "Play hard. We're not just going to lay down.' I feel like that was just a big boost."

After an early five-point lead by Missouri, the Illini took over in the first half, shooting better than 51 percent from the field and hitting six 3-pointers. The Tigers, meanwhile, spent their first half turning the ball over nine times, and things weren't much better to start the second. Illinois extended its lead to 50-30 with a 9-3 run out of halftime, capped by a Nunn 3-pointer.

With Missouri's offense doing more laggin' than braggin', the Illini appeared content to sit at the half-century mark. Illinois went 9:29 without scoring, missing 15 straight shots. Little by little, Missouri forged a 15-point run to creep back within five.

"Lately we'd been going the other way," Missouri coach Kim Anderson said. "We've been starting off fast and fading late, so I was encouraged by the way we did come back."

The Tigers had four possessions in which they could have cut the game to one possession, but Illinois' Malcolm Hill hit a layup to end the scoring drought and put the lead back at seven. After a Kevin Puryear layup, Hill made the deficit eight with a 3-pointer. Missouri would come within three more than four minutes later when Terrence Phillips hit a 3 with 1:02 to play, but Illinois hit eight of 10 free throws down the stretch to hold on.

"I thought when we maybe got it to five or something and we maybe had three possessions and I thought we got a little excited," Anderson said. "I think maybe we took some shots that might have been a little quick and then Hill makes the great shot."

Though Missouri outrebounded Illinois 21-17 in the second half, the Illini grabbed some key boards to salt the game - none bigger than an offensive rebound by Michael Finke that allowed him to put the game out of reach with 24 seconds to go.

Missouri was led in rebounds by Woods, who pulled in 10 while logging a season-best 24 minutes. He also scored eight points for Missouri.

Woods saw the team's ability to fight back from a 20-point deficit as a positive, win or lose.

"I think this is like a good stepping stone for us," he said, "even though we took a loss. But I think it's going to make us better, so I feel like we'll all just learn from this game."

It wasn't the first such stepping stone for the Tigers this year. Missouri also climbed back from a 20-point deficit to Northwestern last month only to lose by five.

Orange noticeably outweighed black and gold in the crowd, though there were plenty of empty seats throughout. The attendance of 14,456 was an all-time low since the game moved Scottrade Center The stakes were not exactly at an all-time high, as each team had five losses on its record heading into the game, also a series worst.

"Obviously, if there was two ranked teams coming in and playing it would probably ... enhance to crowd," Anderson said. "I think it's the worst possible day in the world to play, December 23rd? I mean, but I understand it's a television thing, but a lot of people are already gone for the holidays or if they're like me, they've probably got to do shopping.

Anderson is now 0-2 in the series, having lost 62-59 last year on a buzzer-beating 3-pointer by Illinois' Rayvonte Rice. The five-point difference in Wednesday's final score is the largest since Missouri's last win in the series, a 82-73 decision in 2012.

With the loss, Anderson's teams have now gone winless in his first two seasons at Missouri against non-conference foes from Power-5 conferences - unless the Tigers should reach the postseason.